A Manitoba family is calling on the provincial government to better fund schooling for deaf students after they incurred thousands of dollars of debt for just one year of university for their son. 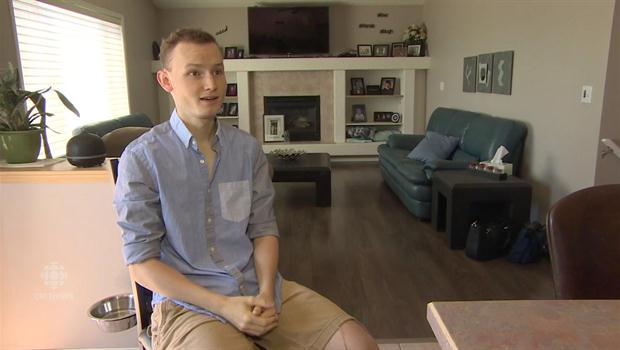 6 years ago
2:23
A Manitoba family is calling on the provincial government to better fund schooling for deaf students after they incurred thousands of dollars of debt for just one year of university for their son. 2:23

A Manitoba family is calling on the provincial government to better fund schooling for deaf students after they incurred thousands of dollars of debt for just one year of university for their son.

"My vision of what it might be like was completely obliterated — it was so much more than what I expected," said Cody. "I made so many friends so quickly. I was involved in sports and soccer. It was just such a quick year because it was so exciting. It felt like a blink and it was done."

But his education came with a hefty price tag. One year of undergraduate study cost his family $56,000 (including tuition, dorm fees and health insurance.)

And financial assistance was limited; Cody's application and appeal to have the full cost covered were denied by the province. Instead, he got about $10,000.

My vision of what it might be like was completely obliterated — it was so much more than what I expected. I made so many friends so quickly. I was involved in sports and soccer. It was just such a quick year because it was so exciting. - Deaf student Cody Zimmer, 18

"They would support him in going [to Gallaudet], however, they'll only pay at the level of what tuition would be at the University of Manitoba," said Rick Zimmer, Cody's father.

The province used to fund the cost of deaf students attending Gallaudet completely, but they've since reduced the amount of money students can apply for and instead encourage them to go to a Manitoba school and use interpreters.

Officials with the Manitoba government said the province runs a $1.9-million-a-year program called marketAbilities, "that provides the same amount of funding to a student pursuing training out of province as would be available to the student if they chose to study in Manitoba. Courses that have no equivalent in Manitoba may be fully funded."

Officials said their policies apply to all people with disabilities, including those who are deaf or hard of hearing.

Cody has gone to deaf schools his entire life and learned in American Sign Language — which is markedly different from English.

Syntax and sentence structure are completely different, while words like "a" and "the" are communicated with facial expressions.

"In class, you really need a very highly qualified interpreter, and even in that situation, it has been determined through research that only approximately 80 per cent of the information will be conveyed through a mediated and interpreted learning environment," said Zimmer, who is a deaf studies instructor at Red River College in Winnipeg.

Not only that, he says, but Cody would be extremely isolated. In a lecture hall with 300 people, only one would be able to communicate with him. Activities like study groups or sports would be virtually inaccessible.

"It's a very isolating experience to be the only deaf person in a completely non-deaf environment. At the University of Manitoba, everyone's conversing in spoken language except that deaf student," said Zimmer. "When another student may approach them and they find out that that student's deaf, then often times people won't want to invest the time to communicate with them."

Zimmer and his wife Kyra are both deaf, and both are instructors at Red River College in the deaf studies program. They know first-hand how difficult it can be for deaf students to be included in everyday events.

"When Cody got back [from Gallaudet], it was amazing to see how much he had changed," said Kyra, Cody's mom. "He was so much more confident. You could see that he had grown personally, and his knowledge base had hugely been enhanced, and I knew it was the right decision for us."

To send him back this year, the family faces even deeper debt. It will cost more than $200,000 US to complete an undergraduate degree.

Cody wants to take deaf studies at Gallaudet — the province will only offer partial funding for students taking programs not offered at Manitoba institutions — and eventually take classes and work in law or governance.

"Statistics show that there are a lot of deaf lawyers in the States, but in Canada there are not," said Cody, adding he wants to return to Manitoba after his studies are completed to help change that and help the deaf community get access to legal advice.

"I hate that my parents are having to seek financial help. I would like to be able to do this independently," he said.

The family re-applied for funding this year, but they aren't hopeful they'll get more.

"[The first time we applied] they just shut me down, and then, at the appeal, I went armed and ready to convince them of my need to go and they still didn't offer full financial support," said Cody. "I would want them to change their policies."

"There are certainly deaf students in Cody's peer group … when I ask them what their wishes are, they do say they wish they were able to attend Gallaudet," said Rick, adding the high cost of going is what stops them.

The number of deaf students accessing education in their first language is down significantly in the last 25 years.

Gallaudet University had 156 Canadian students in 1989. Twenty-five years later, that number is 33.

The school's executive director, Catherine Murphy, said their hands are tied when it comes to lowering tuition for international students.

Their operating funds come from the U.S. government, and they are mandated to charge international students from developed countries double what they charge local students.

There is also a cap on how many international students the school can get in. The idea, Murphy said, is to make sure U.S. deaf students are served and have access.

For now, the Zimmer family is waiting to hear about this year's application for funding, and they've started a GoFundMe account for anyone who wants to donate.

Zimmer said he doesn't feel good about asking the public to help send his son to university, but he wants Cody to have the same opportunities other kids get.

"I want to see [the province's] policies change," he said. "I would like to see there be more options for deaf students so they can choose their paths and have that supported without limitation."