A Winnipeg couple's new home purchase turned from a 'dream home' to a nightmare because of construction problems and the lack of home warranty coverage — something they say no Manitoban should ever have to experience. 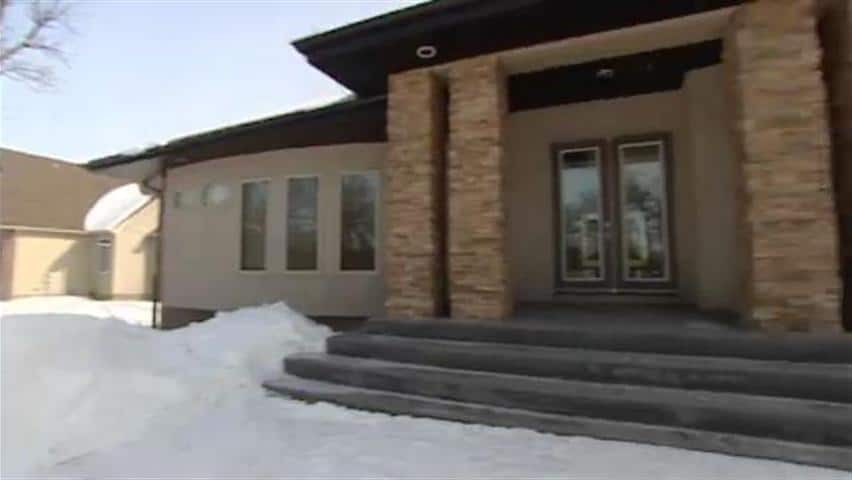 8 years ago
2:53
A Winnipeg couple's new home purchase turned from a "dream home" to nightmare because of two builders' construction problems and the lack of home warranty coverage. 2:53

A Winnipeg couple's new home purchase turned from a "dream home" to a nightmare because of construction problems and the lack of home warranty coverage — something they say no Manitoban should ever have to experience.

"I will never trust a builder again," Heidi Schadek said in an interview with CBC News from their new home in Headingley, Man.

"That's why there needs to be consumer protection," said her husband, Jim Schadek.

Soon after Mannington Custom Homes started building the house in 2007, the Schadeks claimed they were asked to pay extra costs they didn't understand.

The couple said they were being billed for added electrical circuits, beyond what was called for in the original plans.

A few months later, the Schadeks found water several feet deep in the crawl space below the basement floor.

The Schadeks hired an engineer to examine the problem. He found damage to joists from excessive moisture and discovered the vapour barrier in the basement wasn't sealed.

The engineer also cited violations of the National Building Code unrelated to the water problem.

Soon after, the contract between the Schadeks and Mannington ended.

The couple then hired another builder, Parkhill Homes, to repair the basement and finish building the house. According to the Schadeks, it was about half-finished at that point.

Then, an unexpected twist: the first building company, Mannington, placed a builder's lien on the house in the amount of $38,000 for interior doors and trim, even though the doors had not been supplied by Mannington.

The lien tied up the Schadeks' money in court and made it difficult for them to continue the project.

"I don't believe that this lien could be substantiated and that is why it [the money] was released back to us," said Jim Schadek.

"It never should have happened in the first place," Heidi added.

The lawyer for Mannington Custom Homes, Grant Stefanson, told CBC News the law on builders' liens is cumbersome because it forces builders to file any outstanding claims within 40 days of the last time on site, or not at all.

The company says the pressure created by that time limit may lead to incorrect calculations if the full financial picture of the project is unavailable.

In the end, Mannington acknowledged that it made a mistake, and two years later, it released the $38,000 back to the Schadeks.

'There is no perfect home,' says builder

"I don't know anybody who can build a perfect home for a client. There is no perfect home," said Mannington owner Trevor Markevich.

Markevich said Mannington takes pride in being a family-owned business that builds a small number of high quality homes each year.

"We typically go above and beyond warranty and make things better for people. I'd rather spend a little out of my pocket to have a happy customer," he said.

Markevich said after more than 200 projects, only two have ended in a serious dispute.

"There's always going to be some little tweaking here and there, and it's about hitting a target to make somebody as happy as possible. And every client is different," he said.

Mannington did fix some parts of the Schadeks' basement.

In court documents, Mannington argued that any problems arose from the Schadeks' unwillingness to make decisions about construction and refusal to pay for extra material.

The company argued that it tried to settle with the Schadeks in court.

As the family moved forward with the second builder, Parkhill, new concerns emerged.

The Schadeks said Parkhill overbilled on its labour costs by thousands of dollars.

The company apologized, saying it's something that had never happened before, and reduced the labour costs accordingly.

Just weeks before moving in, the Schadeks said they checked the attic and found no insulation. Parkhill did fix that problem the next day, once it was brought to the company's attention.

But one mistake, according to the Schadeks, still hasn't been fixed, and it's the costliest: the garage.

The Schadeks paid for reinforcing steel in the concrete slab for the garage floor.

When the slab started cracking, Parkhill sent a letter stating, "The top mat steel is most definitely in place."

To be sure, the Schadeks hired a company called Structure Scan Inc., which used a machine to scan through the concrete.

The resulting scans showed "no indication of a top mat."

CBC News has made phone calls to Parkhill Homes, but no one has commented on the case.

Warranty must be provided

Both Mannington and Parkhill are members of the Manitoba Home Builders Association.

The code of ethics states member companies must provide a warranty for all new homes they build.

Even that did not go according to plan for the Schadeks.

Mannington says it withdrew warranty coverage because its contract ended. As for Parkhill Homes, the company failed to enrol the Schadeks into a warranty program at all.

"We felt like there was no consumer protection," Jim Schadek said.

"We can't help but feel that they've swept us under the carpet somehow. We're not quite sure how you just suddenly don't have warranty. We'd like to understand how that happened," he added.

The Manitoba government is working on legislation — a proposed new home warranty act, introduced last November — meant to ensure every Manitoban buying a new home will get a warranty.

On Wednesday: The CBC I-Team reports on why some people think Manitoba's proposed new home warranty act is flawed.

Below is the report by the engineer Heidi and Jim Schadek hired to look at problems in their basement. At the time, the house was being built by Mannington Custom Homes.