An invasive beetle that attacks and kills ash trees has been found in Winnipeg, and the city says the bug is likely to eventually affect more than 100,000 ash trees on public property and more than 250,000 on private property.

City has been preparing for the pests for a decade after watching devastation in Ontario, Quebec

An invasive beetle that attacks and kills ash trees has been found in Winnipeg, and the city says the bug is likely to eventually affect more than 100,000 ash trees on public property and more than 250,000 on private property.

Emerald ash borer larvae were confirmed after being found in a tree in St. Boniface, the city's forester Martha Barwinsky said Thursday.

A sample taken from the tree in mid-November was sent to the Canadian Food Inspection Agency, which monitors emerald ash borer populations in Canada and regulates efforts to prevent the spread of the pest.

The agency confirmed the beetle's presence on Nov. 30, Barwinsky said.

"It is a serious problem and it will have a significant impact on our canopy," Barwinsky said Thursday.

"All of the ash species are susceptible to emerald ash borer in varying degrees so we anticipate there will be a significant impact."

While just the one tree has been confirmed to be infested, Barwinsky said there's "little to no chance" it's a lone case.

She said the city has been preparing for the pests for a decade after watching the wood-boring beetle — which originated in Asia — cause devastation to some Ontario and U.S. ash tree populations.

'Once detected, it cannot be eradicated'

This is the first time the beetle has been found in Manitoba, though it has been expected for years. The ash borer was first found in Canada in 2002 in Windsor, Ont.

Adult emerald ash borers feed on the foliage of ash trees while the larvae feed on the tissue beneath the bark, preventing water and nutrients from circulating throughout the tree and eventually killing it.

"It girdles the tree," explained Barwinsky. "Once detected, it cannot be eradicated."

With few effective predators, the beetle has been spreading through much of southern Ontario and Quebec, as well as parts of the U.S.

Barwinsky says the City of Winnipeg and the CFIA will develop survey and surveillance measures to determine when the beetle arrived in the city and how far it has spread.

That work is expected to begin within the next month, starting in the St. Boniface area.

A report outlining the management approach and costs will come in the new year, Barwinsky said.

While nothing can be done to save a tree once it's infested, one of the management options  the city may take would see some ash trees injected with a pesticide every couple of years to "slow the mortality" of the tree, Barwinsky said.

The remaining trees on public property would be removed as they die and would possibly be replaced over time.

"We're just looking at managing it over an extended period of time to try to reduce the losses and spread the losses and costs over that time," Barwinsky said.

The city is at risk to lose all of its ash trees over a 10-year period, resulting in a loss of at least 30 per cent of Winnipeg's boulevard and park trees, which are valued at approximately $437 million, she said.

Barwinsky said she'd have to wait to see the results of the study before estimating the budget needed for the work, but did say it'll cost "millions of dollars."

For the time being, Winnipeggers will be on the hook for dealing with the pest found in private ash trees. But Barwinsky said the city is working with Trees Winnipeg to come up with additional support for homeowners.

Signs of an emerald ash borer infestation include D-shaped exit holes in the bark of the tree from where the beetles emerge around May and unusually high woodpecker activity.

Homeowners can also look for split bark on the trunk or branches and serpentine tunnels under the bark where the larvae have travelled through.

Anyone concerned about the health of an ash tree should call 311 to make a report, Barwinsky said.

That's exactly what Dan Law did when he noticed something wrong with the ash tree on the boulevard in front of his house on Cote Street in St. Boniface.

It turns out Law found the city's first confirmed case of the beetle.

"I looked up and thought it just doesn't look right," he said Thursday. "It just wasn't growing. The leaves weren't anywhere near what they were last year or two years ago."

Law hadn't heard of the beetle before but said after watching how quickly the pests worked their way through the tree on his boulevard he's worried about the canopy on his street and streets across the city.

"This is what kind of makes this area unique," Law said of the trees on street. "Every time I turn down the road it has the trees overhanging and it gives it a sense of, I don't know, it's beautiful."

A 2013 inventory estimated there are more than 200,000 hectares of natural ash stands throughout Manitoba.

"We knew that it was in other provinces east of Manitoba and we were being vigilant," she said Thursday.

"We will be vigilant in our efforts working with the Canadian Food Inspection Agency as well as the City of Winnipeg to do everything that we can to stop the spread of this invasive species."

The province of Manitoba also issued a news release Thursday, advising Manitobans of the arrival of the beetle and echoing city advice not to move firewood.

The beetle's population is most commonly spread through the movement of firewood.

The province makes these recommendations to prevent the spread of the beetle:

You can find more information on the beetle through the city's website. 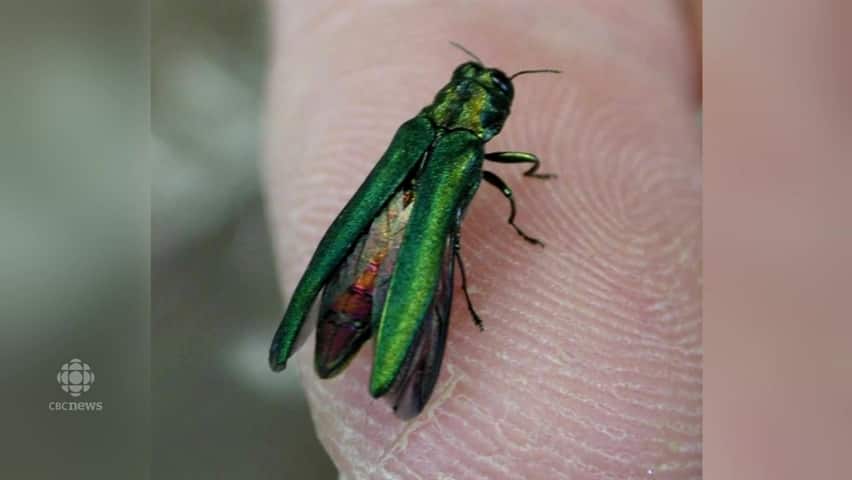 3 years agoVideo
2:00
An invasive beetle that attacks and kills ash trees has been found in Winnipeg, and the city says the bug is likely to eventually affect more than 100,000 ash trees on public property and more than 250,000 on private property. 2:00