More Winnipeggers cycling than ever before, poll suggests

Winnipeggers are pedalling themselves around the city in greater numbers than ever before, and they’re hungry for more, a new poll suggests.

Top priority for city should be separated bike lanes, half of respondents say

Winnipeggers are pedalling themselves around the city in greater numbers than ever before, and they're hungry for more, a new poll suggests.

The poll for the Canadian Automobile Association and Bike Winnipeg, conducted by Probe Research, asked Winnipeggers about their cycling habits, problems they face and what they wish to see to improve cycling infrastructure in the city.

More than 20 per cent of respondents said they cycle daily or a few times a week for transportation, which Bike Winnipeg's executive director says is the highest number they've ever seen.

"It's fantastic to hear more people are choosing to use two wheels to get around than ever before," said Mark Cohoe.

Another 35 per cent of poll respondents said they would cycle more if infrastructure conditions were right.

The top priority for the City of Winnipeg should be adding more separated bike lanes on major routes, almost half of the respondents said.

"When it comes to cycling infrastructure, it's clear that what's good for cyclists is good for drivers. Safety for all road users increases when we separate cars and bikes," said Liz Kulyk, corporate manager of government and community relations for CAA Manitoba. 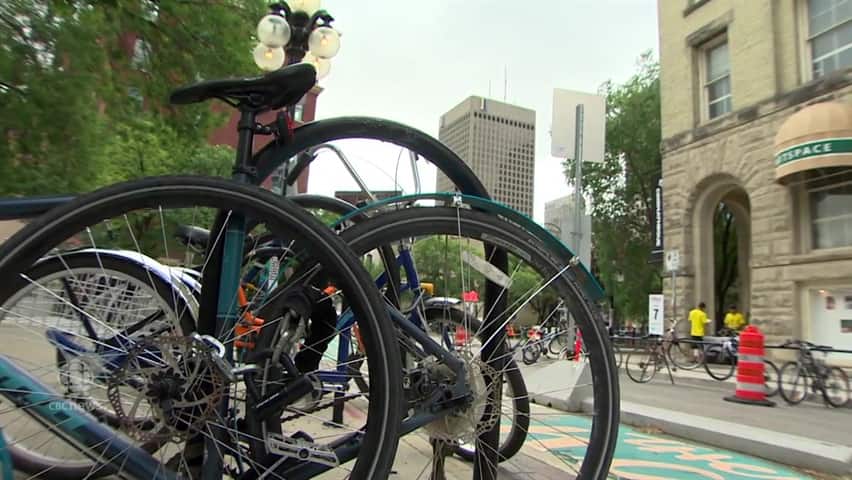 More Winnipeggers cycling than ever before

3 years ago
2:25
Winnipeggers are pedalling themselves around the city in greater numbers than ever before, and they're hungry for more, a new poll suggests. 2:25

Probe surveyed 600 adults in Winnipeg from June 5 to 19. Results are considered accurate with 95 per cent certainty, within four percentage points.

The survey is the first in a series of surveys about cycling in Winnipeg. The next release will focus on safety concerns of cyclists and drivers, and a third will look at what the City of Winnipeg and elected officials should do to improve road design and maintenance for all users.

Some cyclists CBC spoke with said Winnipeg can be a difficult city to navigate while on the bike.

Leif Norman is an avid cyclist, but says it's not for everybody.

"Winnipeg is a tough city for cycling because of the winter, I'm sad to say," he said.

"And it's a little bit sprawly it doesn't have a tight core like other Canadian cities and so people use their cars, they need their cars."

"Winnipeg is a pretty spread out city, so sometimes it's pretty hard to get from one place to the next, it's also a safety thing too it can be a bit scary," he said.