New site at capacity before opening: Observations from a day at Winnipeg's 5 COVID-19 testing locations

People waiting for tests expressed frustration with long wait times, difficulties getting to testing sites, and lack of food and bathroom facilities for people while they wait.

The early morning sun had just broken over the horizon when Leah Delahaye arrived at the mobile COVID-19 testing site at the corner of Portage Avenue and Erin Street in Winnipeg.

It was around 7:30 a.m., half an hour before the site opened, and dozens of vehicles filled the parking lot beside the Robert Fletcher Building.

Staff handed Delahaye a number indicating her place in line. She was No. 78.

"I expected to be one of the first people in line, getting here before it opens," she said.

With two nurses on hand to perform the swab, the site can collect up to 80 samples per day.

Delahaye, who is a student at Red River College, had hoped to make it home for her remote class at 10:30 a.m. She didn't get called in for her test until 2 p.m.

"People that were coming right when it opened were being turned away, because they already reached their capacity," said Delahaye. 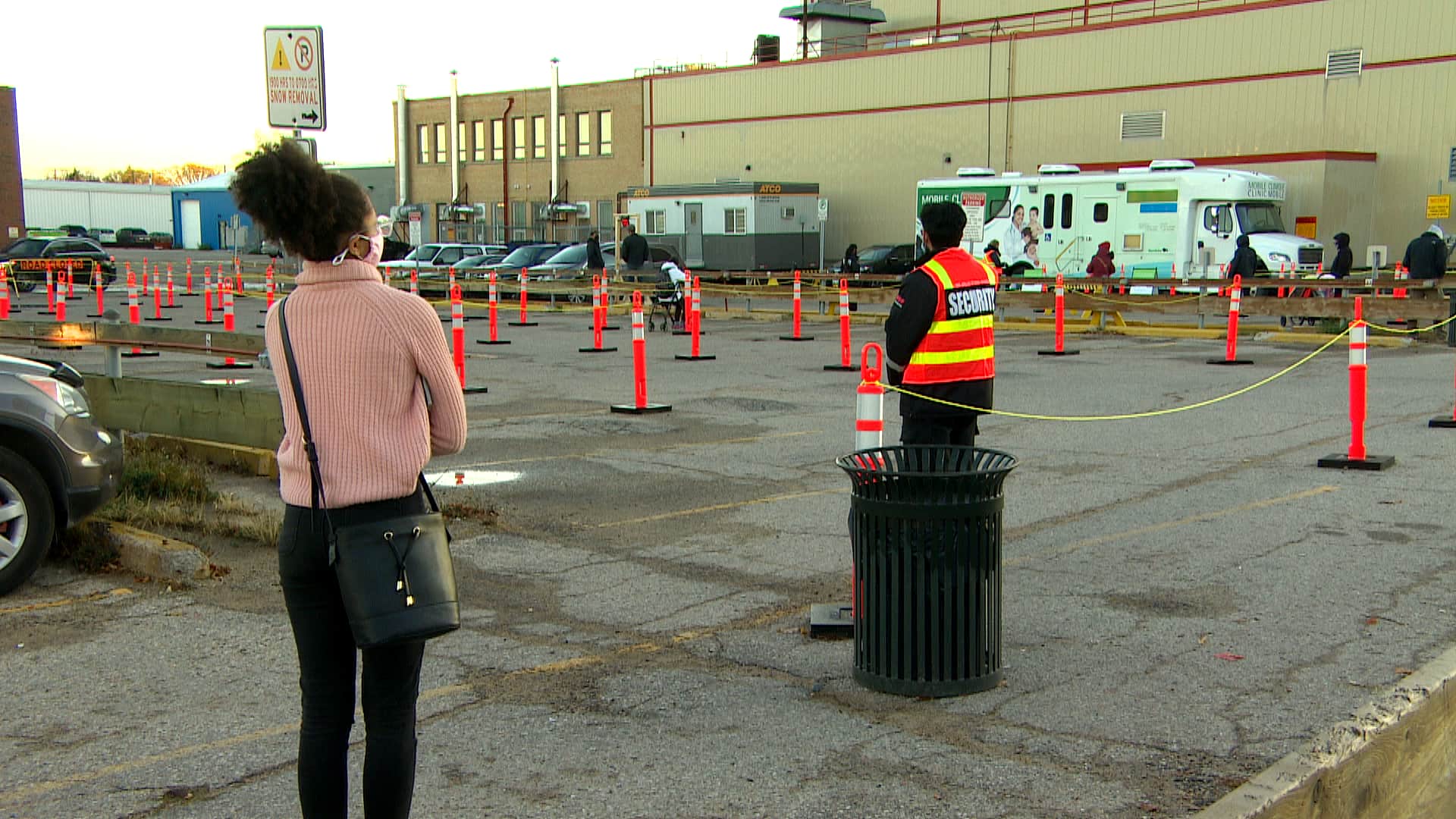 Wait times for walk-ups not sustainable

2 months agoVideo
0:40
Leah Delahaye does not have a vehicle and waited 7 hours for her test at the Portage Avenue location. 0:40

Manitoba public health officials opened the site at 1181 Portage Ave. last week, in an effort to reduce the burden on the city's four other COVID-19 testing sites.

Demand for tests has soared, along with the case numbers in Winnipeg. The province has heard complaints about long waits to get a test and limited operating hours at sites, as well as the effects on nearby residents and businesses.

CBC News visited all five currently open testing sites in the city on Wednesday to see how the system is working. People waiting for tests expressed frustration with wait times, difficulty getting to testing sites, and lack of amenities such as food and bathroom facilities for people while they wait.

A full review of the testing system is underway to streamline the process, the province says. It doesn't collect data on how long people are waiting to get tested, but a spokesperson said that could change following the review.

Among the people CBC spoke to, by far the longest wait times were at the mobile site on Portage Avenue, where people who arrived more than an hour before it opened still waited many hours to have their sample taken.

The shortest wait times appeared to be at the Thunderbird House site on Main Street, where people waited a little more than an hour to get tested.

Only two sites have outdoor bathrooms for people waiting — there are two at the Portage Avenue mobile site, and one at the Main Street drive-thru site. Thunderbird House is the only site that currently offers food to people who need it.

Different sites use different methods for processing people. While the Portage Avenue site gives out numbers based on when people arrive, others, like the site at 2735 Pembina Hwy., take down a phone number and call when it's time to get in line.

Six nurses at a time work at the Main Street drive-thru and the St. Mary's Road walk-in sites, five at the Pembina Highway walk-in station, and four at Thunderbird House, according to the province.

The current capacity for collecting samples in the city is 1,424 per day, including the mobile site at Portage. Once more mobile sites are up and running in the city, the province expects those sites to collect up to 400 more samples per day in the city.

One of the most common wishes among the people who spoke to CBC was for more testing sites.

The province has committed to doubling the number of testing sites in Winnipeg over the next several weeks.

At the city's busiest testing site, the drive-thru at 1284 Main St., John Kyei Baffour and his friend waited 4½ hours in their car before getting a test.

Baffour, who is from Ghana, needed a negative test result within 72 hours in order to fly home, but he said the results often take four to five days and he has had to cancel flights two times.

"It is so, so bad. [Manitoba is] a beautiful place, I love this place, this is my second home — but COVID test takes, like, four-and-a-half hours to be in the line. What is that for?" he said. 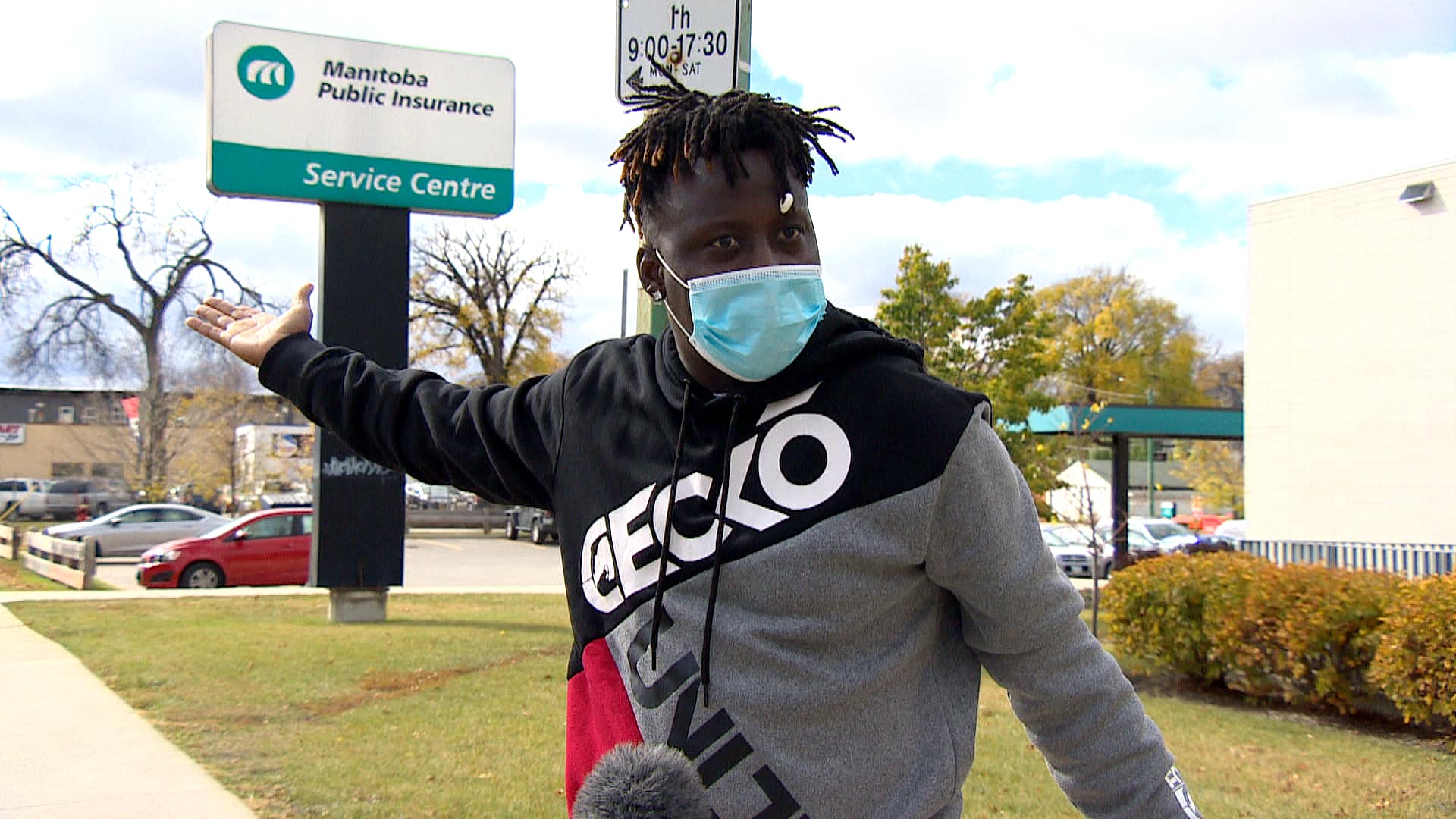 Long wait for COVID-19 tests and results trip up travellers

2 months agoVideo
1:08
John Kyei Baffour and his friend Orthist cancelled two trips to Ghana because of problems with test results which they need to fly. 1:08

Karen Ouellette came to the Pembina Highway site with her daughter, who had a sore throat. Ouellette doesn't have a car, so they walked 10 blocks to get there, and were told it would be about 90 minutes until they were called to get in line.

With no outdoor bathrooms and no food available at the site, Ouellette said she and her daughter would have to go to nearby businesses, which she worried could put others at risk.

"It's not fair that my daughter, who could be testing positive for [COVID-19, has to] enter a store," said Ouellette.

"I feel we have a social contract to one another to protect each other, to protect ourselves, right?"

Siobhan Loeza's 12-year-old son was sent home from school after he started to show symptoms.

He has autism, and has trouble standing still. Loeza tries to hold onto him to keep him from constantly moving and bumping into people, but that makes waiting in long lines a challenge.

After seeing the lineup at the Main Street site, she brought him to the Thunderbird House site, where they waited about 1½ hours. She gave her son a phone to play with and grapes to munch on, to keep him distracted while they waited.

"It hasn't been bad today, but if we had to stand here in the winter for a couple of hours, that's going to be a very hard, hard thing to do," she said. 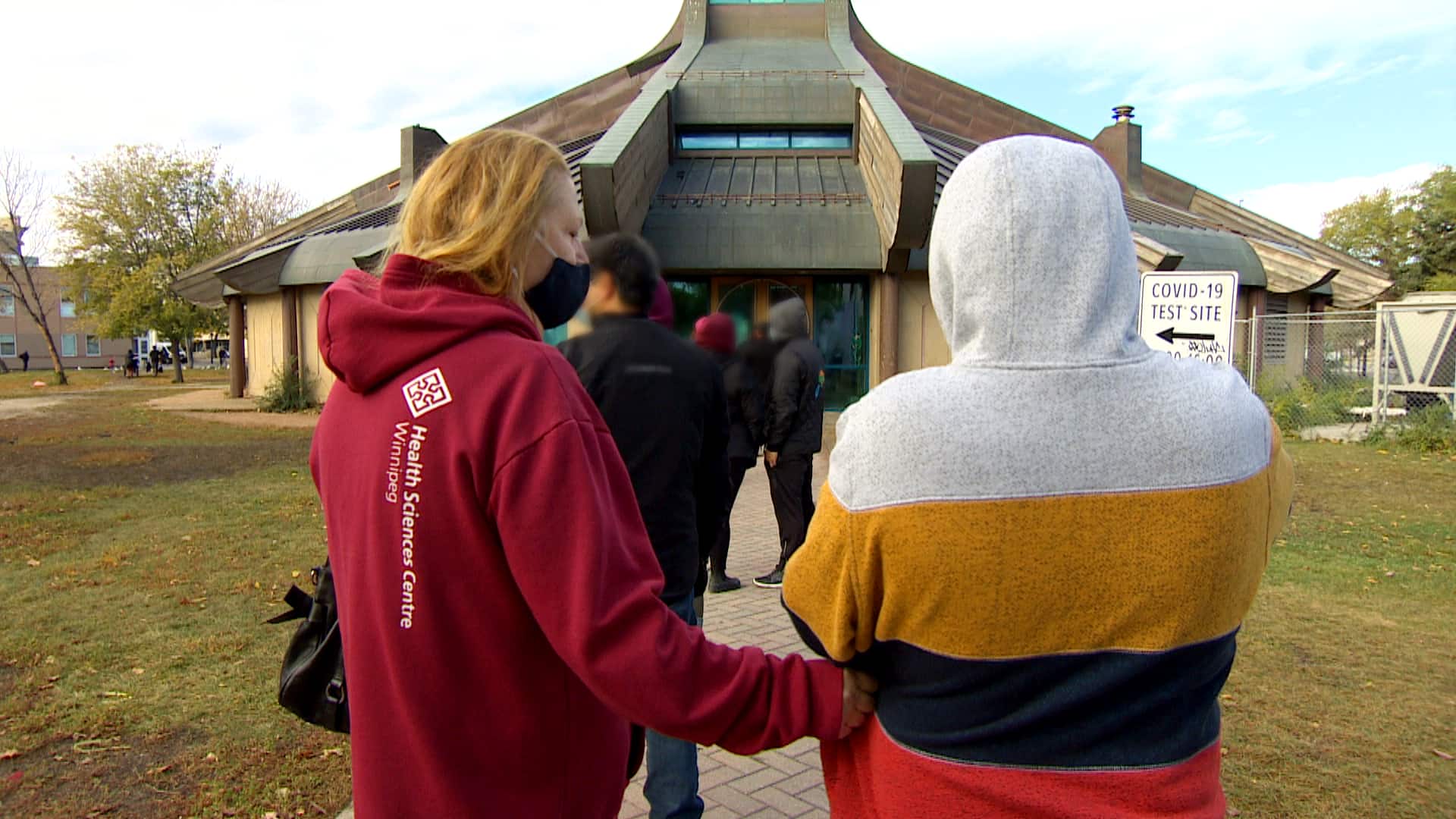 2 months agoVideo
1:16
Waiting in line poses extra challenges for people with disabilities and their caregivers. 1:16

Susanne Pchajek took her granddaughter to the 604 St. Mary's Rd. site for a test. It was Pchajek's second time coming to the site, after taking her grandson two weeks earlier. The line was twice as long on Wednesday as it was during her first visit, she said.

"It's that time of year where everyone's coughing, it's the flu, and so the lineups are going to get longer and longer," she said.

Back at the Portage Avenue mobile site, by 1 p.m., Leah Delahaye had waited, bused back home, and returned. She was worried she would miss her number being called, but the ticker displaying the most recent number had only reached 65.

In the meantime, she listened to music on her phone, texted with friends, and grabbed a tea and muffin from the McDonald's across the street.

She worries that other people won't wait around as long as she did to get tested, especially once winter sets in.

"This is not going to work in December and January, when it's so cold. I just don't see people waiting around to get tested and I think it will kind of make people not want to get tested." Waiting for a COVID-19 test

2 months agoVideo
6:00
Winnipeggers waiting outside for hours to get a COVID-19 test are worried about winter. Wait times ranged from two to seven hours, with the longest waits at the Main street and Portage Avenue locations. 6:00

With files from Erin Brohman and Bartley Kives