Step inside a Winnipeg cannabis store

Five retail spaces will open in Winnipeg Wednesday morning, the day recreational cannabis becomes legal in Canada. Here's a look inside one of them.

Before you make it inside the Delta 9 cannabis store in Winnipeg's St. Vital neighbourhood, you'll have to pull out your wallet to flash your ID.

Assuming you're 19 or older, you'll then step into one of the province's first legal recreational cannabis retail spaces.

From there, CEO John Arbuthnot wants you to think, "Wow."

The retail space at 827 Dakota St. is one of five Winnipeg retail spaces that will open on Wednesday morning, the day recreational cannabis becomes legal in Canada.

It's a large, white room, with only a few glass display cases in the centre and spaced-out shelves on the walls. In the back right corner there's Delta 9-branded clothes. In the front left corner, there's a space for one-on-one product consultations. There's a large Delta 9 logo made of living moss on the wall and images of clouds.

It's at the back of the store where Arbuthnot says things "get a little bit more interesting." A long glass display case forms what they've dubbed the "sensory bars." Customers can get a closer look and smell — but not taste or touch — of the cannabis itself, removed from its official packaging and placed into glass jars only staff can handle.

On Tuesday afternoon, the store was still a jobsite. Dozens of workers and staff were still drilling in millwork, stocking shelves and spraying, wiping and dusting glass display cases. The first load of cannabis — seven or eight varieties from two separate producers, including Delta 9 itself — had just been loaded into a vault the size of a small room in the back.

But by opening at 10 a.m. Wednesday morning, Arbuthnot says the space will be a clean, bright and comfortable place to buy weed.

"We had been joking a few weeks ago at our management meetings that we would open even if the paint was drying and it certainly will be the case," he said.

When you walk in, you'll be able to browse the accessory options, or ask for help from what Arbuthnot called "roaming product specialists" who can grab things out of locked cases for a closer look.

When you want to pick their pot, head to the back wall to see the options. The prices per gram range from $7 to $15, although Arbuthnot said he expects the prices could drop in the future if supply increases.

As he's talking through the sensory bar experience, a staff member hands him one of the small jars — the first one to be filled with cannabis in the store.

Once you've decided what kind of cannabis you want, you walk over to one of the six checkouts along the right wall. The touchscreen tills weren't set up yet on Tuesday afternoon, but they're sleek and white like the rest of the decor. The staff who operate them will have know-how on the products and safety and they'll ask for your ID again.

"Of course there have to be impulse items in retail, so we'll have rolling papers and some of those smaller items for people to purchase at checkout," Arbuthnot said. "And from there, well, hopefully the lineups aren't too big [and] people can actually get out the door as well."

The store is set up for crowd control, he added. At any given moment, 16 to 20 staff will be on the floor, making room for roughly 50 customers. Cannabis that's in the main retail room is stored in locked cases or hidden behind collapsible shutters at the checkout.

"Dozens of cameras, security sensors. Again, very unlike a liquor store, every product is in here is under lock and key, so people can't come in and simply grab a product and walk out the door with it," Arbuthnot said.

"We have panic buttons. We have holdup alarms. And actually, the vast majority of the product is not behind the checkout, it's actually stored in a secure vault here on-site."

On Tuesday afternoon, talking loudly above the sound of drills, Arbuthnot said he had his own "'wow' experience" when he walked through the doors himself.

"This is just the first step. You know, how cannabis evolves and how storefronts, retail and the whole experience evolves over time will be very interesting to see," he said.

"But I'm very pleased with what we've come up with here for Day One." 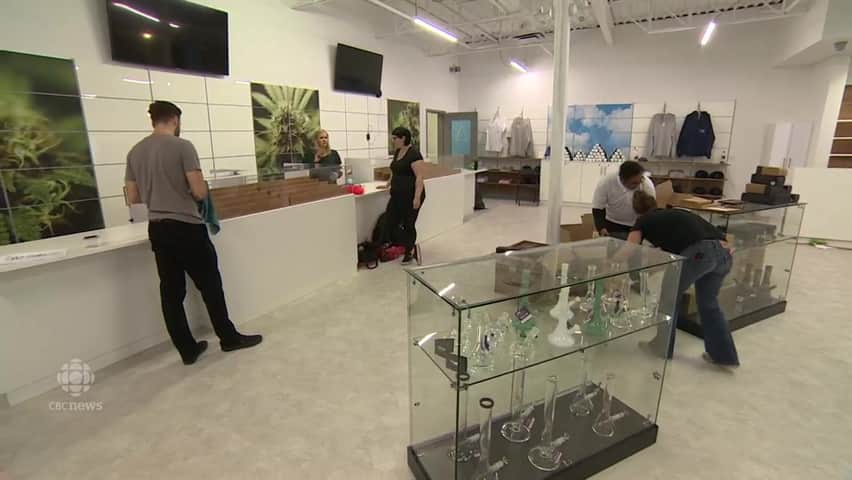 Walk through a Winnipeg cannabis store with the CEO