Winnipeg Jets fans have fallen hard for two highly trained bomb-sniffing dogs and have adopted them as furry ambassadors of True North Sports and Entertainment.

Winnipeg Jets fans have fallen hard for two highly trained bomb sniffing dogs and have adopted them as the furry new ambassadors of True North Sports and Entertainment, which owns and operates both the Jets and Bell MTS Place, their home arena.

Daisy, a three-year-old Belgian Malinois, and her eight-year-old brother, Dante, have been appearing at Jets home games at Bell MTS Place since the start of the 2017-18 hockey season, as part of an enhanced security initiative at the arena.

"In light of recent events that we've seen with security events, like in Edmonton and Las Vegas, I think this is just an important initiative that we have security dogs in place," said Rob Wozny, vice-president of communications and community engagement at True North Sports and Entertainment. 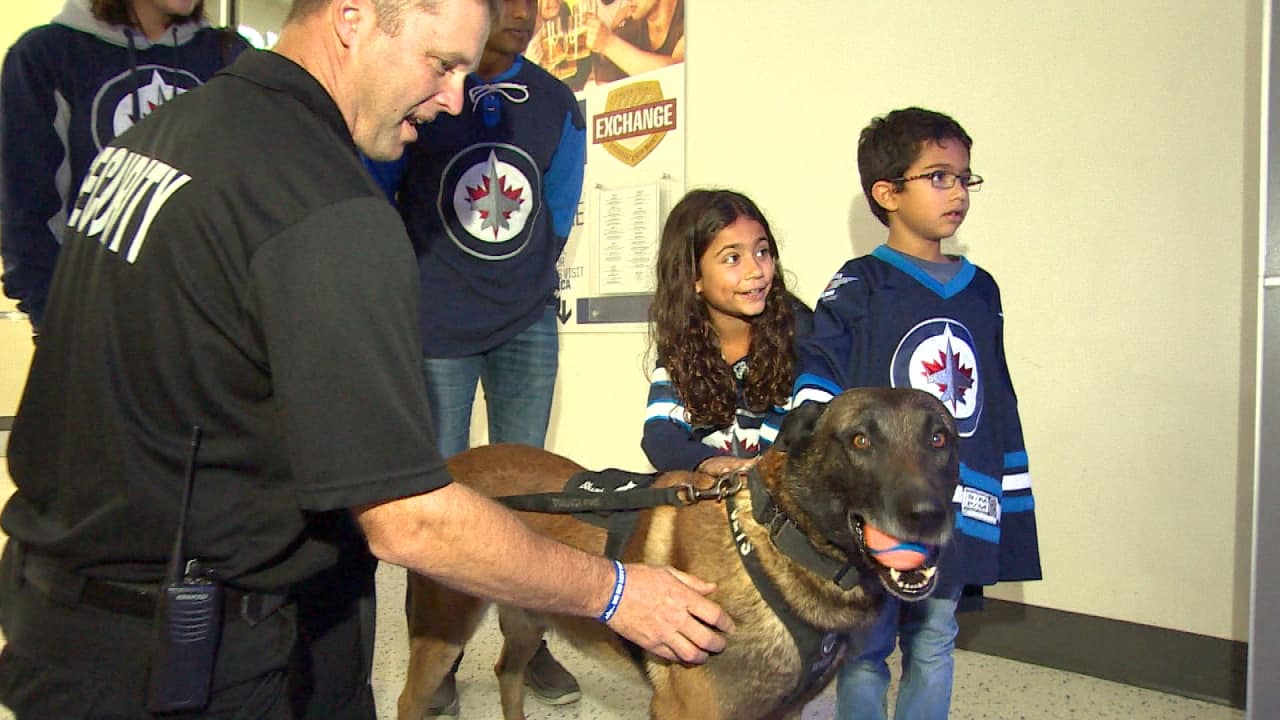 3 years agoVideo
2:33
Winnipeg Jets fans have fallen hard for two highly trained bomb sniffing dogs and have adopted them as the furry new ambassadors of True North Sports and Entertainment. 2:33

The dogs are highly trained explosive-odour detectors. This year, the NHL mandated all venues hosting hockey games include bomb-sniffing dogs as part of their security measures. It's something True North said it was already looking at doing.

"We had been working with security dogs for probably the last 10 years on an event-by-event basis but this year we made the commitment because we invest in security protocols," said Wozny. "It was time to bring a security-dog team into Bell MTS Place and for True North."

The dogs belong to David Bessason, a 27-year member of the Winnipeg Police Service who retired this past spring.

"True North has been very supportive of the whole program. It's awesome working for them. Great organization. I can't say enough about them," said Bessason, who worked as a canine unit handler and trainer.

Not for every dog

Hours before the start of each game, Bessason and his dogs do a thorough search of the downtown hockey arena to make sure there are no suspicious packages.

"Unfortunately that's the way of the world these days," said Bessason. "Public safety and being out front is paramount, and that's what we want — to make sure everybody's safe as can be and that we're doing everything that we can."

But he said not all dogs can become explosive-odour detectors.

"As long as you get good genetics then it's up to the trainer and the handler to actually bring out the other parts of that dog," said Bessason.

First he introduces an odour associated with an explosive device to the dogs. He then teaches them to sit or lie down when they smell it. When they do that they get a reward — either a treat or a ball to play with.

"We continually have to challenge our dogs and make them search longer and harder, but obviously dogs need a reward at the end too, so we use training aids to make sure they get that — to make sure they are stimulated and they want to continue searching after they've finished their first search," said Bessason.

On Sept. 1, True North implemented a no re-entry policy to reduce what it called "heavy pedestrian flow" outside the building during games and events.

The change brought Winnipeg in line with an NHL standard that had been adopted by teams in other cities, including five of the seven Canadian teams in the league.

In 2015 metal detectors, known as magnetometers, were installed at the Winnipeg arena.

"It sends a message to our patrons and to those who come and enjoy hockey games and events at True North Sports and Entertainment at Bell MTS Place that we're committed to security protocols and measures that make sure patrons are safe when they are in our building," said Wozny.

In 1999, while working in the Winnipeg Police Service canine unit, Bessason started Canada's first municipal police-dog breeding program, which has since bred and sold more than 115 puppies to police services in Canada and the United States.

Daisy is one of the pups that came out of the highly sucessful program.

Bessason is now looking at starting the same type of program with his bomb dogs.

"True North's footprint's getting bigger, and just like we did with the police and building our program, we want to do the same things there, to look down the road for succession planning," said Bessason.

"Like the Manitoba Moose and the Jets — you're developing a program," said Bessason. "It's kind of like a draft. So we're going out finding the young prospects and developing them within the program."

Bessason said True North will keep only the best dogs so they can be trained to work at Jets games, concerts and other events. The pups that are not needed will be sold to organizations across Canada and the U.S.

"[At WPS] we sent dogs as far west as Utah [and] down into Florida. A lot of people have heard what's going on here," Bessason said.

"I was in Nashville this summer — just came back from Michigan. They know what we're doing and [there are] a lot of inquires into the training, and the dogs that we're producing as well."