The loss of a North End warehouse used by nearly 30 Winnipeg artists underscores a shortage of safe, affordable studio space in the city, artists say.

The loss of a North End warehouse used by nearly 30 Winnipeg artists underscores a shortage of safe, affordable studio space in the city, artists say.

"They lost space in a town that is running out of space," said Cliff Eyland, a Winnipeg artist who teaches at the University of Manitoba.

A massive fire broke out at the former mattress factory at 274 Jarvis Ave. in the early hours of Monday morning. It burned to the ground and everything inside — including decades of artwork and studio spaces for 27 artists — went up in smoke.

In the wake of the disaster, artists grieving their lost work are left searching for space in a market that Eyland and other artists described as dwindling, as rising rent across the city and in the Exchange District leaves few affordable options.

"For many people, this building on Jarvis, the old mattress factory, had become a kind of refuge," said Tom Lovatt, an artist who used the space.

"To have it totally gone, totally destroyed, means suddenly everybody is looking for studio space at once. And so this is going to put a lot more pressure on what remaining spaces there are that are affordable to artists," he said.

"I think in some senses, we're all faced with that now."

Years ago, Winnipeg artists could find an abundance of affordable studio spaces in the city's Exchange District, said Lilian Bonin, an artist who had a studio in the Jarvis Avenue building. But rent in the area has risen, she said, and many artists have been displaced.

She worked out of her home for years, she said, but felt her practice was elevated by working close to other artists at the Jarvis building.

Meeka Walsh, editor of Border Crossings Magazine, said artists are often displaced after taking up spaces many businesses wouldn't want and making them attractive. The magazine is helping run a fundraiser for artists from the Jarvis Avenue building online, which had brought in more than $52,000 by late Tuesday afternoon.

"I think there's a real issue," she said. "There should be some kind of either rent control or provisions made, so that artists can establish themselves and not always be nervous about … when will the next rent increase visit them."

Both Lovatt and Eyland said they previously had studio spaces in the Exchange District but left when rent got too high. In Eyland's case, that was roughly six months ago, he said, and the space remains empty.

He's noticed more crowded studio spaces, and said it's possible a lack of large workspaces could impact the type of work artists do — making it harder to make large-scale paintings or sculptures, for instance.

When he moved to Winnipeg in 1994, Eyland said the city was among the most affordable in the country for artists. It's still much cheaper than many cities, even as rents rise, he said.

"The landscape has become pretty dire lately. Rents are going up, and people are finding it hard to find studio spaces," Eyland said. "And yet, [Winnipeg] is still one of the cheapest places in Canada to have a studio."

Eyland said he's never seen a disaster like the loss of the Jarvis building in any other city's art scene, but rising rent is a problem across the country — and artists find a way to work anyway.

"I don't think artists actually whine a lot. I think they make do," he said. "I can say for sure that's what Winnipeg artists do. They figure stuff out and they get together and they do collective things … Here's hoping it'll work."

Lovatt said he wants to see some kind of protections for artists, possibly in the form subsidies for studio space, to protect the unique arts scene that's grown in the city and make it sustainable.

"I like to [say], Winnipeg has its own gravity field. Things that happen here don't always happen in other places in the country," he said.

"What we have here is really worth preserving, and you don't want to just throw it on the mercies of an economic system that really doesn't place a high value on the arts."

WATCH: Winnipeg artists decry a lack of studio space in city after a massive fire torches their artwork 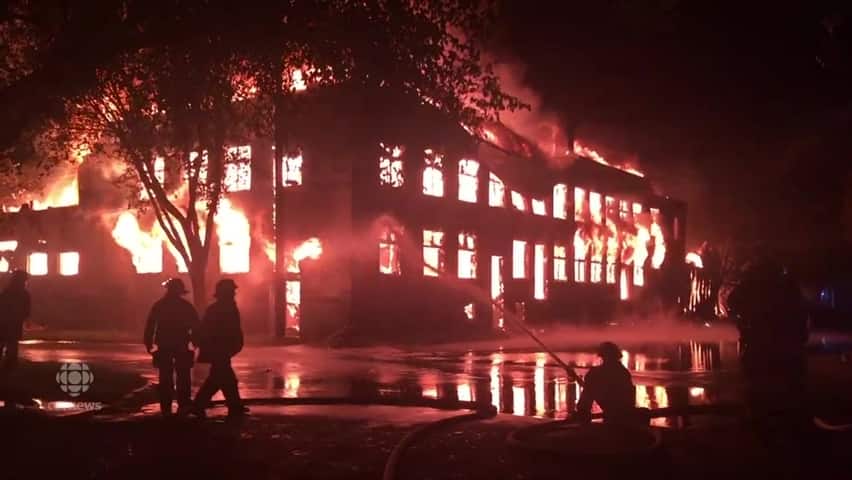