Demonstrators will keep showing up until there's justice, one attendee says

Upwards of 300 people huddled outside the Law Courts building in downtown Winnipeg Monday afternoon for the first of eight consecutive days of pop-up protests.

The Justice 4 Black Lives Winnipeg group will be gathering somewhere in the city, every afternoon at 3 p.m., to demand action.

This is the same group behind the massive Black Lives Matter protest at the Manitoba Legislature earlier this month, attended by thousands.

On Monday, the crowd chanted in unison for nearly an hour. "Black Lives Matter," they shouted. "No justice, no peace, no racist police."

Reena Jolly said she was thrilled to hear these voices, of different people and ethnicities, rising up as one.

"Until we get justice, there won't be peace. So as long as these protests keep happening, people keep showing up and we'll be there."

The Jolly siblings say they've both experienced racism. She said people have unexplainably yelled the N-word at her, and he said people who suspect him of being a criminal have followed him through stores.

"A lot of people think Canada is still not as bad as America, or that stuff doesn't really happen here, but it does," the 20-year-old said.

People at Monday's rally huddled on the grass and sidewalk along Kennedy Street, spilling on the streets, while they followed chants led through a megaphone.

The vast majority of people wore masks to protect themselves from COVID-19, and most people tried to keep some separation between themselves and others.

Monday's demonstration was dedicated to Ouwatoyin Salou, a 19-year-old black woman from Florida who was found dead earlier this month. She went missing shortly after she wrote on Twitter about her sexual assault.

Supporters held a moment of silence in her honour.

The group's marquee demand is the "complete abolition and defunding of the Winnipeg Police Service" — a concept gaining local recognition in recent weeks, especially after a video surfaced of police kicking a man they were trying to arrest.

More than 60,000 people have signed the petition

The group will be unveiling the location of each protest every morning on social media. They initially planned seven days of events, but an organizer told the crowd Monday they would add one more demonstration, next Monday.

The organizers declined to speak with the media. 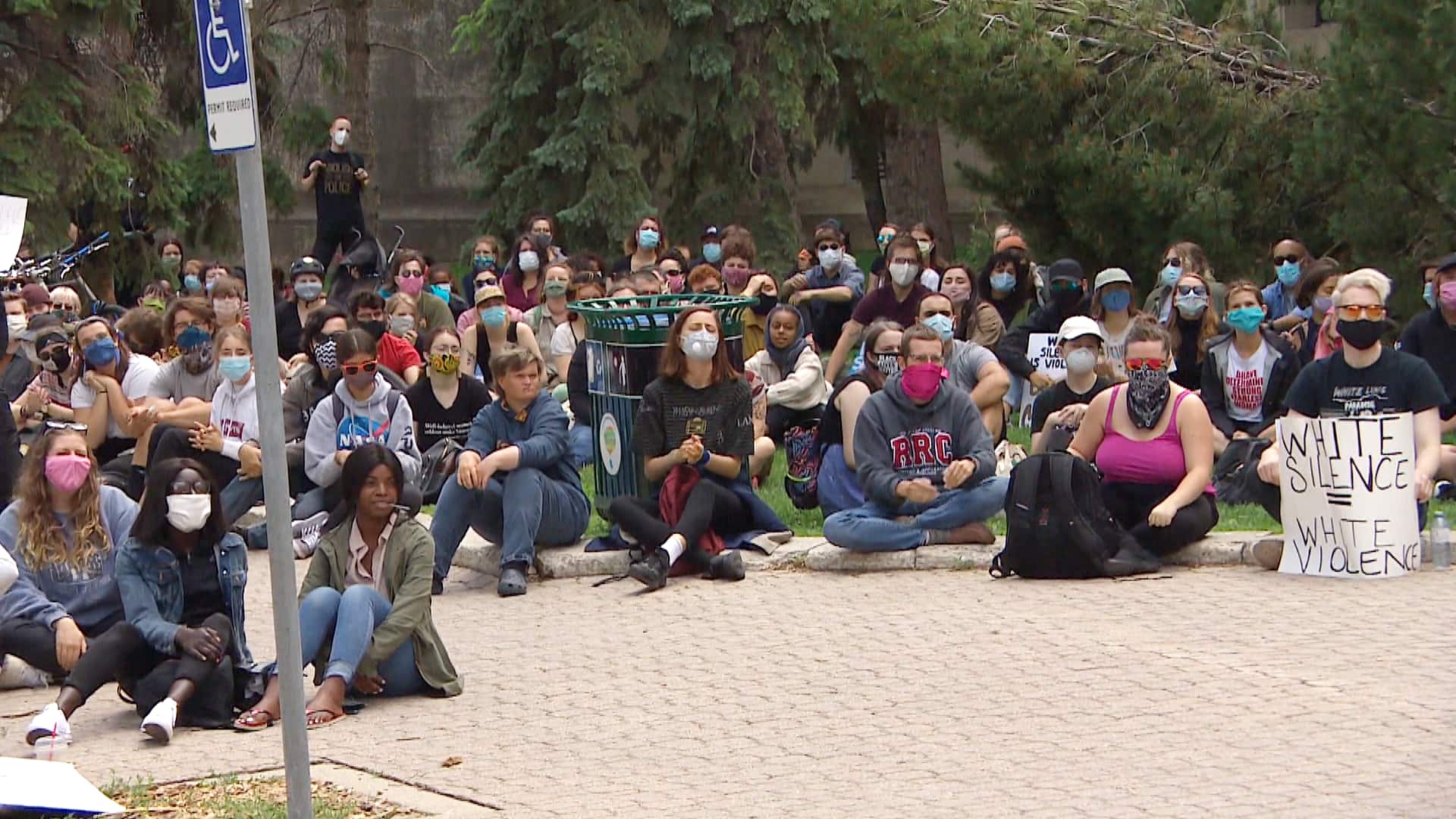 7 months agoVideo
1:48
A crowd gathered outside the Law Courts building in downtown Winnipeg Monday afternoon for the first of eight consecutive days of pop-up protests to end anti-Black racism and police brutality. 1:48