Winnipeg's Met School gets students thinking outside the classroom

When Sasha Zigic works out at the gym, she is both building on her health as well as her education — and she's part of a growing student body doing similar school work. 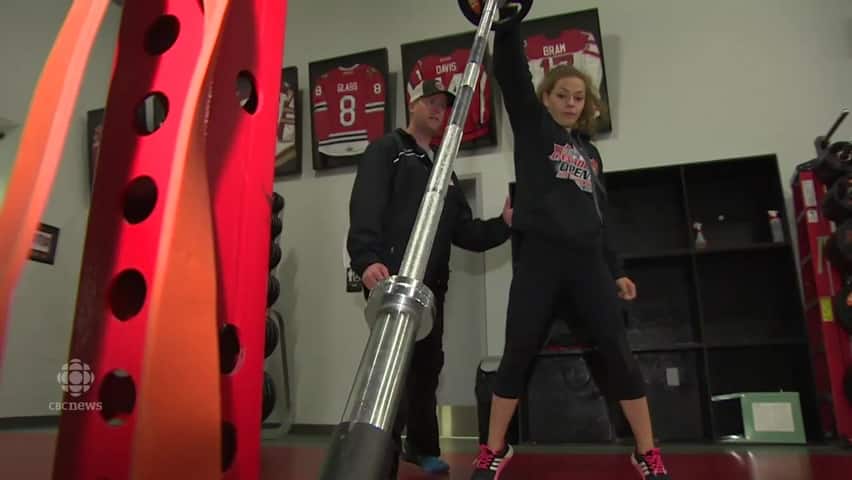 4 years ago
2:28
Seven Oaks School Division Met School is projecting to have over 20 high school grads this year and 30 the following year. 2:28

Students often work hard to get their school credits but some, like Sasha Zigic, are literally breaking a sweat.

When Zigic, 16, works out with NRG gym owner Scott Miller, she is both building on her health as well as her education — and she's part of a growing student body doing similar school work.

A judo athlete with a keen interest in athletics and personal training, Zigic has an eye to opening up her own gym one day.

She started high school at the Met School in Seven Oaks two years ago and, as part of her course credit, has been spending two days a week interning in workplaces like NRG gym to gain experience in her areas of interest.

Initially, when she started at the alternative high school, she thought she wanted to be a speech pathologist but quickly discovered she had other interests.

"When it came to that point in my schooling I was like, 'yeah, I'm not doing speech pathology … it's definitely going to have to be something in the athletic field.' So we looked at what do you want to do off of that," said Zigic.

The Met School is high school with a twist. Classes are limited to about 15 students and the entire school population doesn't exceed 120, which officials say allows them to focus on relationships. Students have the same teacher, which are called advisors, for all four years and students' interests play a large part in determining how they learn core material.

"The student has to be creative and think outside the box and it gives them those critical thinking skills that are really needed in the world that we're sending them out to once they graduate and I think people are really starting to see the value in that," said principal Nancy Janelle.

Students are still required to meet all provincial requirements in math and sciences and physical education, but the advisors tailor student projects toward their interests to encourage students to be more invested in their education.

"The hands on learning, the meaningful work and having students be more engaged in their work and still meeting curricular outcomes that every other student is meeting, but in a creative, engaging and fun way, I think students [and] parents are on board," said Janelle.

Amora Leblanc, another Grade 11 student, started off doing an internship at a bakery because originally that had been one of her bigger interests. She soon realized it wasn't what she wanted to do and through other placements discovered her love of animals could lead to a rewarding career.

"I decided to open my branch a bit to more of my interests and I tried animals and it turned out to be one of my real passions. It really got me to understand that," said Leblanc.

She has been volunteering and interning at Darcy's Arc Animal Rescue Center and said that she has had some rewarding experiences including vet clinics and animal blood testing that will help her build her resume after school.

"I want to go into the Red River College program, the animal health technology program, and I feel like this will give me some experience that they might actually be already teaching in that course," said Leblanc.

The Met School has partnerships with over 500 businesses throughout the city and past students have done placements and earned course credit for work in a range of technology, graphics, health and science industries with organizations like Health Sciences Centre, Cancer Care Manitoba, Red River College Pharmaceutical lab, the National Microbiology lab, Rainbow Stage and the Manitoba Museum.

Many grads have also gone onto university and college for post secondary schooling but Janelle said the program isn't just for high-achieving academic students.

"We have a lot of students … who are on the 90 per cent honor roll and they've come because they want to take their learning to the next level and do things they wouldn't be able to do in a traditional setting, but we also have a lot of kids who come who are feeling like they have no idea what they want to do with their life after they graduate," she said.

The internship experiences give students a chance to investigate careers, get out into the community and get real hands on experience, Janelle added.

The school on Jefferson Avenue has grown steadily from 45 students in 2009 to capping out this year at 120. Interest has grown so much that instead of having a 60-student wait list they've decided to open a second school inside Maples Collegiate. Three Grade 9 classes and one Grade 10 class will be housed in the new location.

The small student body and class sizes were another reason Zigic was so keen to skip out on a traditional high school experience.

"I'm a very anxious person and I get really nervous quickly so having that kind of relationship with the teacher and the students and having that close, smaller classrooms, I found [it] a lot more comfortable and easier for me to make the transition," she said.

On top of being mentored at the gym, working with kids and creating workout plans, Zigic's interest based project last year was a research project looking into the Pure Power Mouthguard which markets itself as more than protecting teeth. The mouthguard maker says its device also increases strength, flexibility and balance for athletes.

"You can't really do that in a regular high school setting. If I was like 'oh here English teacher, I want to learn about the Pure Power Mouthgaurd.' She would be like, go do it at home. But here you can bring it all in," said Zigic.

Zigic now has plans to continue her training and push her education to university where she wants to study for a degree in kinesiology.