And then there were 8: Incumbent Bowman faces more than half-dozen mayoral challengers

As of 4:30 p.m., incumbent mayoral candidate Brian Bowman and seven challengers have completed the nomination process and will appear on the election ballot on Oct. 24, pending any withdrawals on Wednesday, the deadline for dropping out of the race.

The period for filing nomination papers expired at 4:30 p.m. Tuesday

It's all but official: eight people are running for mayor in Winnipeg this fall.

When the doors to the city clerk's office closed at 4:30 p.m. on Tuesday, incumbent mayoral candidate Brian Bowman and seven challengers had completed the nomination process.

They will appear on the election ballot on Oct. 24, pending any withdrawals on Wednesday, the deadline for dropping out of the race.

A total of 10 candidates registered to run for mayor. Superstore clerk Chris Clacio and youth worker Desmond Thomas did not complete the nomination process.

Here are the candidates who have:

Political experience: Registered to run for Mayor of Winnipeg in 2010, but failed to submit valid nomination papers.

Portage and Main position: Not yet stated.

Best known: As the subject of an award-winning John Paskievich film called Special Ed, which chronicled Ackerman's efforts to save three inner-city properties, including Alphabet House, from demolition. That included a five-hour standoff with police in 2012.

Portage and Main position: Open it.

Best known: As Winnipeg's 43rd mayor — and the first Indigenous mayor in the city's history. Bowman was a political neophyte prior to his landslide victory over former NDP MP and MLA Judy Wasylycia-Leis, future Liberal MP Robert-Falcon Ouellette and other candidates in 2014.

Portage and Main position: Not opposed, but there are more important issues.

Best known: As a Point Douglas beat cop and an advocate for more action on Winnipeg's methamphetamine crisis.

Best known: As a mayoral candidate this year, Hayat has campaigned against the expansion of rapid transit.

Portage and Main position: None stated.

Best known: As a mayoral candidate this year, Machiraju has advocated for the construction of an inner ring road.

Political experience: Ran for council in Mynarski ward in 2010, losing to Ross Eadie.

Best known: As a mayoral candidate this year, Motkaluk was running second in voter support to Bowman at the end of August, according to a CBC-commissioned Probe Research online poll of 600 Winnipeg adults. It had an error margin of four per cent.

Political experience: Ran for the provincial Liberals in Southdale in 2007 and in Minto in 2011. Ran for the St. Charles council seat won by Shawn Dobson in 2014. Ran federally as a Green candidate in Winnipeg Centre in 2015. Ran as an independent in Minto in the 2016 provincial election.

Best known: As a candidate in multiple elections, as "the singing bus driver" who serenaded Sam Katz's executive policy committee and for convincing the City of Winnipeg to rename "Garbage Day" as "Recycling Day." 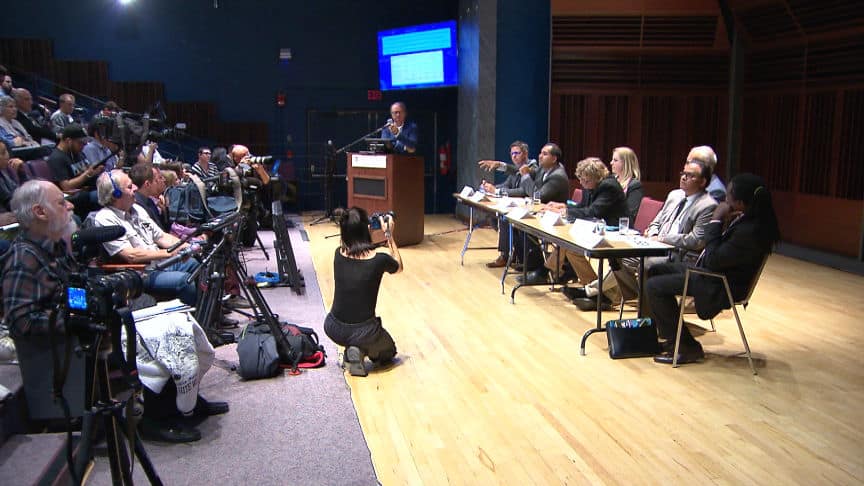 Mayoral candidates had three minutes to share their environmental platforms

2 years ago
20:29
For the first time in this election, mayoral candidate shared the stage. Seven out of eight took part in a forum on environmental policy at the University of Winnipeg Tuesday night. 20:29
CBC's Journalistic Standards and Practices|About CBC News