In a city that has one of the highest COVID-19 infection rates in Canada, Brigitte Turner hopes the takeout orders her restaurant serves aren't contributing to the rapid spread of the illness in Steinbach.

'They're going to comply because they have to, but they don't believe in it,' restaurant owner says

In a city that has one of the most COVID-19 cases per capita in Canada, Brigitte Turner hopes the takeout orders her restaurant serves aren't contributing to the rapid spread of the illness in Steinbach.

"We just pray that they're taking larger orders home to their families — not ordering for, you know, five or six people that are coming over to hang out," said Turner, who co-owns Bigg Smoak BBQ in the southern Manitoba city.

"We can hope, but I think our hope is dwindling with the numbers that are rising."

The city has become a hot spot among Canadian cities for spread of the coronavirus that causes COVID-19.

The Steinbach health district — which has a population of over 21,000 — had 197 active cases as of Tuesday, according to provincial data (though the province has recently said its active case data may be inaccurate due to a backlog).

That would work out to a rate of more than 900 cases for every 100,000 people, higher than that of any other Manitoba city, including Winnipeg. (By way of comparison, Toronto has a current active case rate of about 135 per 100,000, according to that city's latest data.)

Nine people in the Steinbach district have died of COVID-19, including four after an outbreak at Bethesda Place personal care home in August.

The worrying numbers in Steinbach come as the entire province begins a weeks-long partial shutdown Thursday, that will include a ban on socializing with people outside your own household.

Turner feels the coronavirus crept up on Steinbach, a city renowned for its strong sense of community, volunteerism and adherence to the Christian faith.

"I think it's more of the small-town notion of, 'It's not going to come here — that's big-city stuff,'" Turner said.

"We have a lot of community involvement with a lot of gatherings to do with sports and family things, and I think a lot of that just didn't take a back seat."

More and more people are taking COVID-19 seriously, but a small minority isn't, she said. Some people don't believe there's anything to worry about.

"They're going to comply because they have to, but they don't believe in it," she said.

"At this point, it's a guessing game why people don't want to believe it. The numbers are right there, the deaths are there, the infection rate is going up."

She's shooed away a few customers who refused to wear a face covering. She heard a patron try to explain to a friend that a death rate of one to two per cent from an illness is actually devastating.

She's watched as young women laughed as a big-box store employee urged them to wear a mask.

"We all need to take the politics out of what the government is asking us to do and just do it for ourselves" and for our community, she said.

Over the past week, a daily average of 31.2 out of every 100,000 residents of the Southern Health region (which includes Steinbach) were diagnosed with COVID-19. No other health region in Canada, aside from Winnipeg, comes close.

Still, some are skeptical of the virus's existence, or the threat it causes. A neighbouring political leader, Rural Municipality of La Broquerie Reeve Lewis Weiss, referred to a "plandemic" in a Winnipeg Free Press interview, implying the pandemic was orchestrated.

University student Alex Major wouldn't point fingers at a specific cause, but said Steinbach residents took a while to notice the pandemic's looming threat.

It's not like in August, he said, when a few restaurants voluntarily shut their doors for a day or two, after a few reported cases of COVID-19.

"It just took a while for us to catch up," he said.

One of those restaurants was Golden Fried Burgers and Fries. On Monday, all city restaurants were barred from serving dine-in customers, as the Southern Health region moved to the red, or critical, level on the province's pandemic response system — the level Winnipeg has been at since Nov. 2, and which the remainder of the province moves to Thursday.

"For so long, it was the idea that Winnipeg was going through it worse," co-owner Isaac Loewen said.

"At some point in time, that led to complacency or frustration, and I think that led to the measures we're taking now."

"It's that idea of country space — a little bit more air to breathe. But now I think that people are taking [it] a lot more seriously."

'Fear being pumped into the people'

Evangeline Loewen, who owns a flower shop on Steinbach's main drag, is following the public health orders as she must — but she wonders whether the tight lockdown restrictions go too far.

"A lot of people in this town will never, ever tell you their opinion; they're just quiet people," she said of her traditionally Mennonite home.

"Ninety-nine per cent of the people that walk in the store are not happy with what's going on."

Instead, she advocates for measures separating the most vulnerable in society from everybody else. Another near-lockdown may have disastrous effects on economic, physical and social well-being, she worries.

"We're not happy with the whole fear being pumped into the people."

She said she cares deeply for the elderly, the demographic most at risk of dying from the virus. She only questions whether the effects of a lockdown are more harmful than the virus.

She said she knows the widow of a COVID-19 victim who feels the same way.

"One more thing I do think is that people should actually look to God," she said.

"That's part of why a lot of us aren't as afraid, either, is because we do know there's a God. He made us, He's the one that can actually heal us." 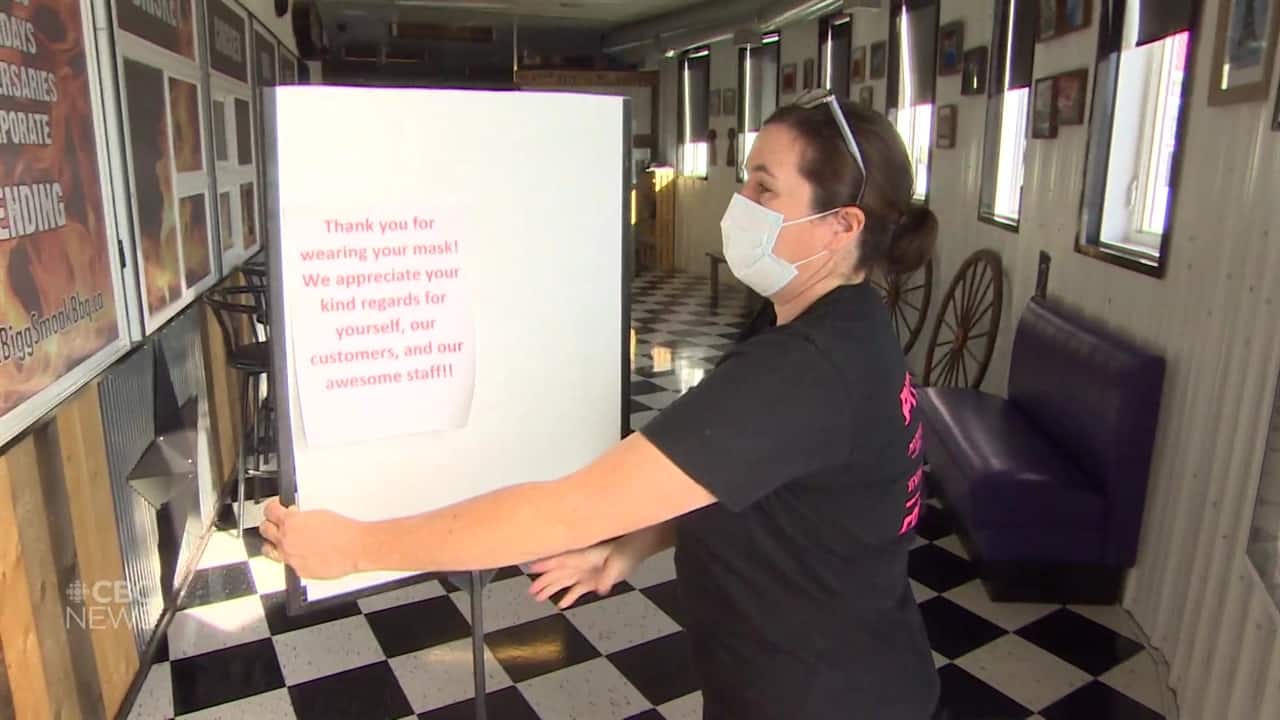 18 days agoVideo
2:27
While Winnipeg's been getting most of the attention the number of COVID-19 cases in Steinbach, Man. might be even more concerning. 2:27