Staff at Winnipeg's Welcome Place have been running off their feet for the past week, going back and forth to the Richardson International Airport — sometimes several times a day — to bring Syrian refugees to their new home.

Despite winter weather, refugees talk about warmth of people in Manitoba 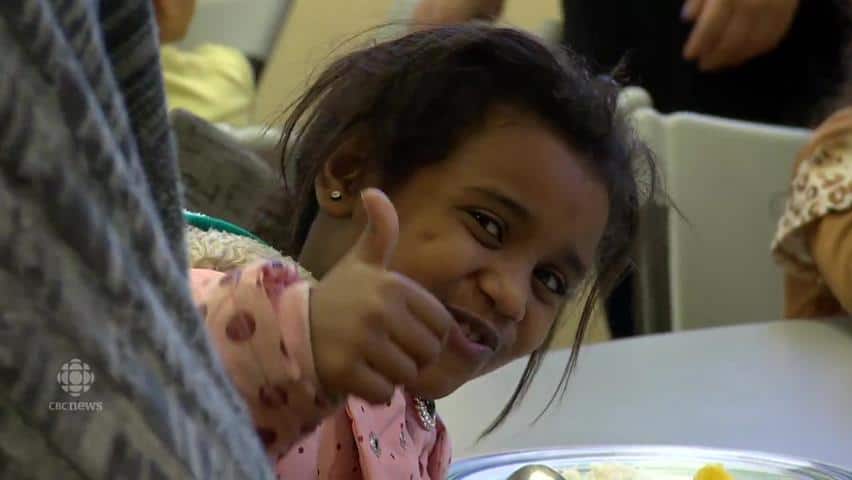 5 years agoVideo
2:07
A refugee-support program that specializes in help for young refugees and immigrants already has more than double its normal amount of students and is expecting about 30 more this week. 2:07

Staff at Winnipeg's Welcome Place have been running off their feet for the past week, going back and forth to the Richardson International Airport — sometimes several times a day — to bring Syrian refugees to their new home.

Some 130 government-sponsored refugees arrived in Winnipeg between Dec. 28 and Jan. 1, said Rita Chahal, executive director of the refugee resettlement centre.

"Our staff was incredible. People came to work on their time off, they came to work on weekends, they gave us holiday time, family time, to do what was necessary to welcome the new arrivals and to make them feel comfortable," she said.

Despite the winter weather, the newcomers are enjoying their new home, Chahal said.

"It's exciting for many of them. Snow is new, but they really have commented on the warmth of the people and the warm welcome that they received, so they talk about that warmth," she said.

Welcome Place has also had a lot of support from the community, Chahal said, including receiving tickets from the Manitoba Moose to take a number of the families to a hockey game.

"I think they're just really happy. We haven't had any complaints, let's put it that way."

The centre, which can accommodate up to about 120 people on a temporary basis, is full, but Chahal said Welcome Place is also using a secondary location.

Many other agencies in the province are also housing and helping to resettle the new arrivals.

Chahal said the number of arrivals is just going to keep rising as the months progress and the federal government works towards its goal of bringing 25,000 Syrian refugees to Canada.

It's expected that 2,000 will be in Manitoba by the end of February, and that number doesn't include privately sponsored families.

Meanwhile, a refugee-support program that specializes in help for young refugees and immigrants already has more than double its normal amount of students and is expecting about 30 more this week.

Normally, NEEDS Inc. has between 20 and 30 students enrolled in its school preparation program for newcomers. The program spends two weeks preparing kids for public school classes.

Right now, they have 59. Seven started on Monday, and another 24 will arrive on Wednesday, according to staff at the centre.

"When they're here they're just so excited and happy to be here, especially with other children from the same country or [who] speak the same languages," said program manager Kirby Borgardt. "When they come here, they're still pretty isolated until they really settle, and it takes some time to do that.

"It's definitely important to build that rapport and have that connection," said Borgardt. "Oftentimes, without that connection or sense of belonging, that's when you lose students."

15-year-old Hamam Alhariri arrived in Canada about a week ago and started the school prep program on Monday.

Before Alhariri arrived in Canada, he was able to attend school for six years in Syrian and two years in Jordan.

"I kind of feel a little bit sad going back a couple of years, but I have to deal with it, and I need to learn the language first," he said. "I want to learn English, and I want to continue my education."
For 13-year-old NEEDS Inc. student Ayham Albakar, it's been four years since he was in school.

"I miss my friends," he said on Monday. "Because of the war, I didn't get the chance to continue my education and learn a lot of things I was interested to learn."