'We are in grave peril': Manitoba doctors call for emergency funding to deal with COVID-19 spike

Manitoba has entered a new phase of heightened restrictions to stem the spread of COVID-19, but many doctors and infectious disease experts in the province say it's still not enough.

'It is clear that public health is overwhelmed,' more than 200 doctors say in open letter to premier

Manitoba has entered a new phase of heightened restrictions to stem the spread of COVID-19, but many doctors and infectious disease experts say the province still needs to do more.

For the second time in less than a week, doctors in the province have penned an open letter to Premier Brian Pallister, calling for stronger action from the province, including emergency funding to deal with the spike in cases.

"Over the last several weeks, we have watched our COVID pandemic spiral out of control with a test positivity rate of 8.9 per cent and mathematical modelling from jurisdictions around the world showing we are in grave peril," states the letter, signed by more than 200 doctors and dated Nov. 1.

"In 12 weeks, our numbers have become the worst in the country, the outbreak at Parkview Place had claimed 22 lives as of October 31, and our existing ICU beds are now full."

As of Sunday, there were 120 COVID-19 patients in hospital in Manitoba, including 18 in intensive care.

Manitoba reported six new COVID-related deaths that day, bringing the total to 75. Fifty-five of those deaths have been in the month of October.

Between Friday and Sunday, the province reported 1,141 new COVID-19 cases, and now has the highest number of cases per capita in Canada. 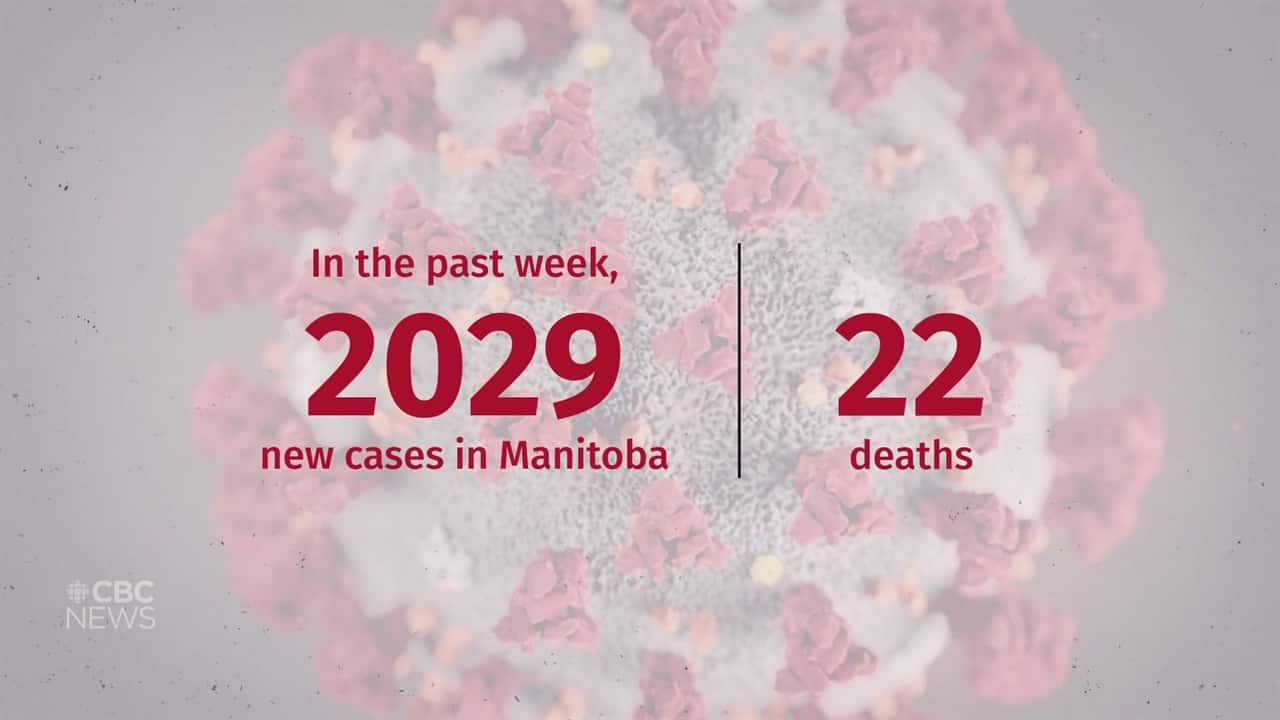 Doctors Manitoba organization pleads for you to stay home

1 month agoVideo
2:28
Doctors Manitoba represents more than 3000 physicians in the province. As COVID-19 spreads rapidly across Winnipeg, the hospitals and ICUS are full now. The organization says our system can't handle any more. 2:28

"We have the highest degree of concern about what is happening right now," Dr. Jillian Horton said in an interview with CBC News on Sunday.

"That needs to be followed with the most aggressive possible response at the highest levels of government," said Dr. Horton, a general internist in Winnipeg and one of those whose name is on the latest letter.

"We have no more margin for error. We do not have the kind of capacity that we need if things get really bad, really quickly.

"Based on what is happening in other countries and parts of world, we're really afraid that is about to happen here, and we're afraid of that for good reason."

She said the letter was prompted by an alarming sense the province's response has not been quick enough.

"These feelings have been brewing with people here for a really long time.… One of my colleagues said, 'It's been like watching a slow-moving train, but the only difference is I'm actually on that train,'" Horton said.

"We are upset, we're frustrated, we're incredibly concerned right now for the health of Manitobans, for our friends, for our colleagues, ourselves, our families. But we want to be here to serve in the way that can best turn this around."

"We are also concerned that Dr. Brent Roussin has neither the budget nor the resources to adequately protect our population from this virus," it says.

"It is clear that public health is overwhelmed, lacks the power to complete timely contact tracing, and is unable to provide timely results because testing capacity has been overwhelmed."

The letter goes on to outline seven steps the doctors believe the province needs to take in order to rein in the COVID-19 outbreak, including emergency funding "for contact tracking, public education, and other critical personnel needs" and to "increase our testing capacity and turnaround."

The province can't tackle COVID-19 by just moving resources from one spot to another, Horton said — there must be more spending.

"Until we have more resources and more people on the ground to do these things, we just are not going to make a dent in so much of this."

The doctors' letter also says the province's public health department is hampered by a communication strategy that suggests it lacks the resources to meaningfully educate the public, which in turn impacts people's ability to protect themselves.

Horton said flaws in that communication strategy include an apparent lack of cultural sensitivity and followup supports for people after they test positive.

The letter calls for rapid testing to be available in places where there have been confirmed or suspected outbreaks, and for regional health authorities to take over any privately run personal care homes that are not controlling outbreaks at their facilities.

It also reiterates the need for more stringent closures, questioning the logic behind the clause in the current restrictions that allows religious services and gyms to continue.

Under the new provincial restrictions that came into effect Monday, most gatherings in Winnipeg and the surrounding area are limited to five people.

However, faith gatherings are limited to 15 per cent of the building's capacity or 100 people, whichever is lower. Gyms and fitness centres are able to operate at 25 per cent capacity.

"We really would like the government to look very closely at houses of worship [and] religious gatherings," Horton said.

"We appreciate and value the importance of these events in these communities and the lives of Manitobans, but this is one area where we're concerned we are going to continue to see transmission."

Roussin told CBC on Monday that he is seeking a balance with the restrictions, because a complete shutdown like the one in April isn't sustainable. However, it's not out of the question, he said.

"If we saw the current trend continuing and we weren't satisfied that we were getting … the adherence, we could be looking at further restrictions in the short term," he said.

The letter from the doctors also calls for increased financial support for people whose incomes are going to drastically drop due to the latest health measures.

"We realize that these suggestions require enormous financial commitments. However, the virus makes not only the rules but determines the budget required to control it," the letter states.

"It is the fundamental duty of the government to protect its citizens from the physical, mental and economic impact of COVID-19. The only formula that has worked elsewhere in the world in decisive action by government, with compassionate and forward-thinking decisions that come with a high price tag.

"The price of failure is the highest price of all."

That said, Horton urges every single person to do their part to reduce the strain on the system — minimize exposures to others, wear masks and wash hands.

"We do believe that with aggressive efforts now we are still in deep trouble, but we can begin to mitigate some of this," she said.

"Take this seriously. We have to get this as right as we can in the coming weeks."

Echoing Horton's remarks, a number of Manitoba physicians also put out a "call to action" to the population at large on Monday, warning that hospital resources could be overwhelmed within days.

"Physicians are issuing a red alert to urge all Manitobans to act now to stop the spread of COVID-19," said the release from Doctors Manitoba, an association that represents over 3,000 doctors in the province.

"Our goal is to have open ICU beds at each of the three acute hospitals at all times, but over the last week we have been nearly full, at times with only one or two beds open across the entire city," ICU physician Dr. Kendiss Olafson says in the release.

The rates of infection, hospitalization and death being reported now will be the tip of the iceberg if nothing changes, and if people don't isolate as much as possible, the release states.

"Physicians know that staying home and limiting your contact with family and friends is difficult, especially during a time when we are worried about each other's well-being," said Dr. Cory Baillie, president of Doctors Manitoba.

"We know that limiting business activity and faith-based gatherings is a major sacrifice. We would not be calling on all Manitobans to step up like this if it wasn't absolutely necessary."

Read the letter to the premier from Manitoba doctors: