Winnipeg is known as a car city, but a series of mysterious wayfinding signs are encouraging people to ditch the gas guzzlers and use their own two feet to stroll through the city instead.

The signs have popped up across downtown, The Forks and Exchange District

Winnipeg is known as a car city, but a series of wayfinding signs of mysterious origin are encouraging people to ditch the gas guzzlers and use their own two feet to stroll through the city instead.

"They're a form of guerilla wayfinding.... It encourages people to gather their cars and to walk and to cycle," said Ryan Segal, community planner with Urban Systems. 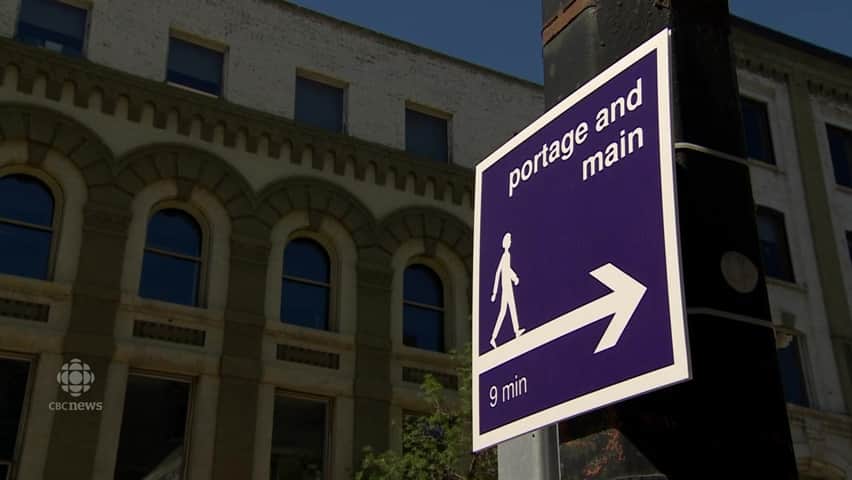 1 year agoVideo
2:00
Winnipeg is known as a car city, but a series of wayfinding signs of mysterious origin are encouraging people to ditch the gas guzzlers and use their own two feet to stroll through the city instead. 2:00

If you're walking around downtown Winnipeg, the Exchange District or The Forks you'll see the signs perched on poles. They display the closest distance to nearby landmarks such as Portage and Main or other tourist hotspots.

The signs are believed to have been designed and created from the website Walk Your City, which is focused on helping cities become more walkable. Anyone can sign up for an account and then begin to create signs of their own, but it's unclear who is responsible for posting them across Winnipeg.

Segal's thesis during his masters at the University of Manitoba studied the benefits of wayfinding systems for children in the Exchange District.

"It helps to make a city legible, [helps] people navigate it. I mean, there's people in Winnipeg who might not be comfortable downtown."

He said signs like these can be important for tourism and showcasing the city.

While Segal sees notable benefits to the community and businesses, Lindsay Somers, a community health consultant, sees the benefits for individuals.

"Walking is such a great way to be connected, to see the other people and architecture, nature and sights along the way," said Somers. "It actually prompts people to suggest the idea of a walk."

Somers is hopeful that initiatives like the signs will help people be more aware of the what their city has to offer.

If there is increased pedestrian (and cycling) traffic, Somers says, it will help to create a more vibrant and lively atmosphere around the city — similar to when major events such as Nuit Blanche are ongoing.

Somers hopes the signs expand out to the suburbs, too.

"It'll be great for different residential neighbourhoods to have a sign [that says] your grocery store is three kilometres away, or going to the library is a 10-minute walk," she said.

"For people to sort of re-frame how they get around from Point A to Point B. And to not just autopilot go into your car," she said.

With files from Tyler Crivea