A group of 18 families facing eviction from Manitoba Housing have been given a little more time to leave.

Province says it will await results of Sept. 7 meeting before giving tenants the boot

A group of 18 families facing eviction by Manitoba Housing have been given a little more time to leave.

The Manitoba government has confirmed it's allowing Portage la Prairie residents who have been living rent-free until at least Sept. 7 to leave the social housing village where they have been residing since 1996.

That's when the group will get the meeting they demanded with Indigenous and Northern Affairs Canada after protesting their eviction.

In a statement, a spokesperson for Manitoba Housing said the department provided tenants with a letter on Monday indicating a willingness to wait until those discussions have been held to determine when writs of possession will be enforced.

The writs can be executed at whatever time is deemed appropriate after this meeting takes place, the release said.

The families, who have been living rent-free in social housing since 1996, were given notices earlier this month by Manitoba sheriffs saying they would be evicted this week. However, the sheriffs never showed up, and there was concern residents would be forced out Monday.

The residents say they were forced from the Waterhen First Nation after an uprising in the community. Now, they say, they're owed a permanent new place to live that was promised to them by the federal and provincial governments.

The tenants say they stopped paying rent to protest a broken promise by the two levels of government to give them a new home.

Many vow to fight eviction

Alphonse Catcheway, 85, is among those facing eviction. He said that even though he has been paying his rent, he's being evicted because he's living in a two-bedroom unit.

He told CBC earlier this month he would leave peacefully when sheriffs arrive at his home, but others say they plan to fight the eviction and will have to be carried out of their homes. 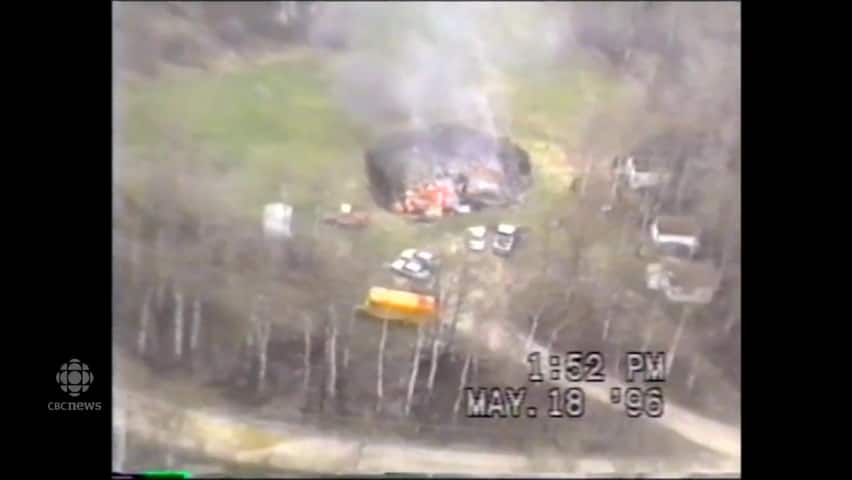 3 years agoVideo
1:30
RCMP officers took control of the Waterhen Reserve where Natives sought shelter. Protesters were demanding their own reserve, saying the band chief was corrupt. The CBC's Reg Sherren reports in this 1996 TV story. 1:30