A group of women and men are walking along the Red River, from its headwaters in Minnesota to the mouth at Lake Winnipeg, in honour of missing and murdered Indigenous women and girls.

A group of women and men are walking along the Red River, from its headwaters in Minnesota to the mouth at Lake Winnipeg, in honour of missing and murdered Indigenous women and girls.

The walkers, 11 women and four men, are carrying water from the headwaters of the river in Breckenridge, Minn.

The water is carried by a woman, who is supported by a man carrying an eagle feather staff with 134 ribbons.

130 of the ribbons carry the names of women whose bodies were found in the river over the past four decades.

Four of the ribbons are left blank, for the four women who were never identified.

"As we're walking, I ask everybody to be silent, and to focus on restoring health to our waterways … honouring those names of women who have been pulled out of the Red River," said Sharon Day, leader of the walk. She's led several others like it to raise awareness about water pollution.

The water walk movement began in 1998, she said,  when Grand Chief Bawdwaywidun Binaise of Midewiwin Three Fires Lodge in Wisconsin asked Day and others about what they would do for the water.  While Day attempted to save a spring in Minneapolis, Josephine Mandamin, who lived in Thunder Bay, began walking with a pail of water and didn't stop, trekking more than 10 000 kilometers to call attention to the need to preserve the Great Lakes and other waterways.

Mandamin inspired Day to do the same, and the two became friends. Mandamin passed away in February.

"I learned how to do this from her. I think about her a lot," said Day.

"In every Indigenous woman who's ever stood up for anybody, for themselves, I think about them… They are the warrior women. But Josephine, she was the head."

The walkers are from mostly from Minnesota, with some others from South Dakota, Wisconsin and Thunder Bay.

"We become sort of a family, and people join as they can," Day said.

Paul Eaves was one of the men among them.

Although he never met the women whose names he carries on his staff, he believes saying and carrying their names is like "a prayer to the spirit."

"That's the energy that echoes out into the world," he said.

"There's been way too many lives lost. Way too many."

Through walking, Eaves says he has learned his role in stopping violence against women.

The walkers will finish at the mouth of the river in Lake Winnipeg, and will pour their water there. 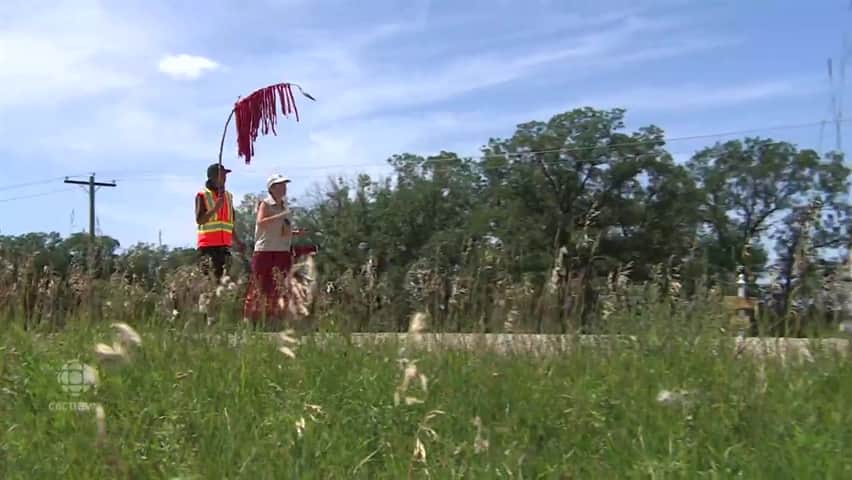 2 years ago
3:04
A group of people walk from the source of the Red River in Minnesota to Lake Winnipeg to honour missing and murdered Indigenous women and girls. 3:04