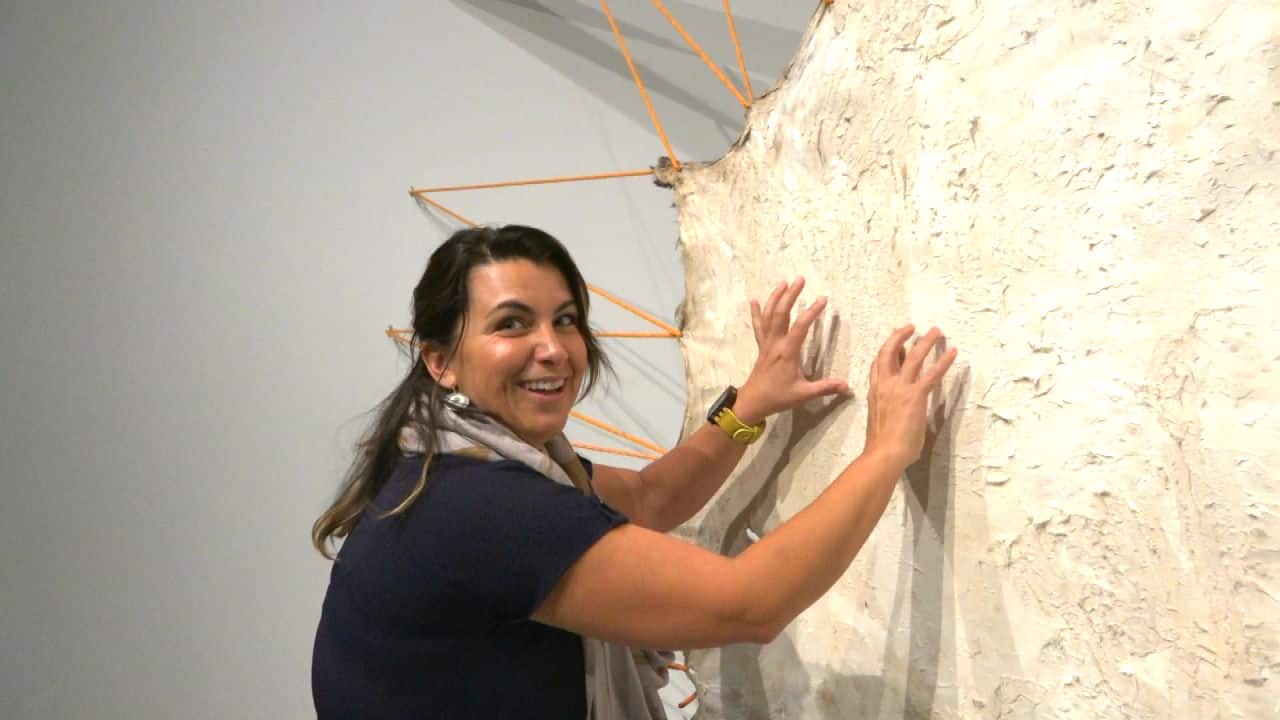 Insurgence/Resurgence fills 10,000 square feet of the WAG with Indigenous art

3 years agoVideo
2:56
CBC's Teghan Beaudette gets a preview of Insurgence/Resurgence at the Winnipeg Art Gallery courtesy of co-curators Julie Nagam and Jaimie Isaac. 2:56

On Friday, the Winnipeg Art Gallery will unveil Insurgence/Resurgence, the largest and most ambitious exhibition of contemporary Indigenous art in its history.

Co-curators Julie Nagam and Jaimie Isaac have selected work from 29 artists across Canada, including 12 new commissions and four debuts.

The exhibition is both indoors and out, with a massive mural by Kenneth Lavallee on the WAG's facade.

In Eckhardt Hall (essentially the WAG's entrance), massive clouds hang from the ceiling, a sculptural piece by Hannah Claus inspired by the concept of the sky world.

Even the stairs are a part of the sprawling exhibition, with Plains Cree written on each step, part of a multi-piece language-based work by Joi Arcand.

"We were really interested in reclaiming and taking up space, and Joi was really excited to think about how that would impact each person walking in and out of the gallery," said Nagam.

Isaac said for decades, Indigenous artists have been relegated to showing in museum spaces rather than contemporary art spaces.

"It took some really fantastic Indigenous curators and artists to really push those boundaries and assert their space within these kinds of institutions," said Isaac. "The political insurgency and the cultural resurgence you'll see in this show goes across the board, really thinking about what's happening in politics right now, what's happening with the environment, land politics and cultural and language politics."

"It's the first time we're sort of seeing leather and beading being done in sort of an S and M kind of theme," said Nagam. "She's playing with ideas of gender, two-spirited, queerness. She's thinking a lot about body and representation."

The WAG has planned months of programming around different parts of the exhibition. On opening weekend, that includes live inking from Earthline Tattoo Collective.

"[They're] creating and rethinking and trying to revive traditional tattoo methods by hand-stick and hand-poking," said Nagam. "We basically did everything different that people aren't used to having happen."

"This space is for you," said Isaac. "It's for everyone, and your interpretations of the artwork is as important as the curators or the artists making it."