Developing 'culture of consent' biggest challenge for Kinew in 2018

You might think Wab Kinew's attention was focused on rebuilding the party or positioning for the next election, but the NDP leader says his most challenging moments of 2018 were environmental.

Not environmental as in clean air or drinking water, but regarding the atmosphere in the workplace and specifically the political environment.

"It's definitely been a huge challenge to try and do what's right and create a culture of consent but then also to bring people along to understand why we're making the changes," Kinew said.

That culture of consent for Kinew means a workplace free of harassment or bullying, where staff can reach full potential and feel like they're supported.

In Kinew's opinion, greater strides for safe and respectful workplaces have been made in offices outside the political sphere — both corporately and in the not-for-profit sectors.

"For whatever reason politics is behind the eight ball. And so we've been doing a lot of work in the NDP to improve that," Kinew said during a year-end interview with CBC News.

Kinew faced questions about his own past in 2018, whether it be brushes with the law, accusations of domestic violence or rap lyrics he wrote tinged with misogyny and homophobia.

The NDP has also been the centre of scrutiny for revelations of inappropriate behaviour by some of its leading figures and maintaining a "toxic environment" during its time in office.

Kinew says those issues are not the reason why he chose creating a culture of consent as his most challenging moment of 2018.

Improving that culture, Kinew says, is a work in progress that requires building relationships and rigorously communicating with people about what the changes are and why they're being made.

As he sat for the year-end interview in his kitchen, the politician juggled third son Tobasonakwut in his arms and declared the boy "the best" thing about 2018.

Kinew said he sees very broad but looming threats to the prosperity of Manitobans on the horizon.

Both are technology-based and rapidly evolving.

"I think the biggest threat to prosperity, economically speaking, is that automation, artificial intelligence — technological developments like that, if they're not done right, may put a lot of Manitobans out of work and that will be hugely disruptive to our economy," Kinew said.

Robots and the digital manipulation of data, Kinew believes, could upend major sectors of Manitoba's economy. Industries such as transportation, manufacturing and finance could automate jobs away.

"We can't put the genie back in the bottle when it comes to technology. We've got to figure out how to make it work for us rather than us work for technology. That's basically the paradigm we've got to approach it with," he said.

CBC News asked Kinew if he knew someone who is struggling with addictions and how that informed a response to the current crisis with methamphetamine.

He acknowledged he'd fought addiction himself and knew others who are struggling with it, but singled out one particular friend — some he described as essentially a brother.

"He's like living in a story that you see in the news basically about meth addiction," Kinew said. "And the thing that I've been thinking about lately is that it's not really a meth crisis. What we have is an addiction crisis."

Kinew says his friend's battle with meth is a parallel to what's happening across the province.

"What we have in Manitoba is an addiction crisis. And so long as we don't address the root causes that's driving people to addiction — which is unresolved trauma in their own life —​ we're going to continue struggling with whatever new substance comes along," he said.

Kinew believes the provincial government has a role to play in helping people with their addiction battles.

"I don't think Manitobans expect governments to do everything for people who are struggling but we can do something and we can do more than what we're doing right now," he said.

Kinew was asked if there was something he admired in his political opponents — Premier Brian Pallister and Liberal Leader Dougald Lamont.

"Well, we all live within a kilometre of each other, so I guess we're all we're all neighbours to a certain extent. So regardless of whatever party affiliation we have, our kids and our neighbours are invested in one another's success. So if our province does well then all of our kids are going to do well." Kinew said.

Kinew acknowledged politics has come with some costs. Sleep, for one. The very public nature of the job is another.

After two years in the role as NDP leader, though, he says the fire is still burning for the job.

"I get to have a seat in the front bench of the legislature. And regardless of whether you're a First Nations person or you're non-Indigenous, I don't care what background you come from, not too many people have had a chance in the history of our province to do the job that I do. So I consider myself very lucky. Very fortunate." 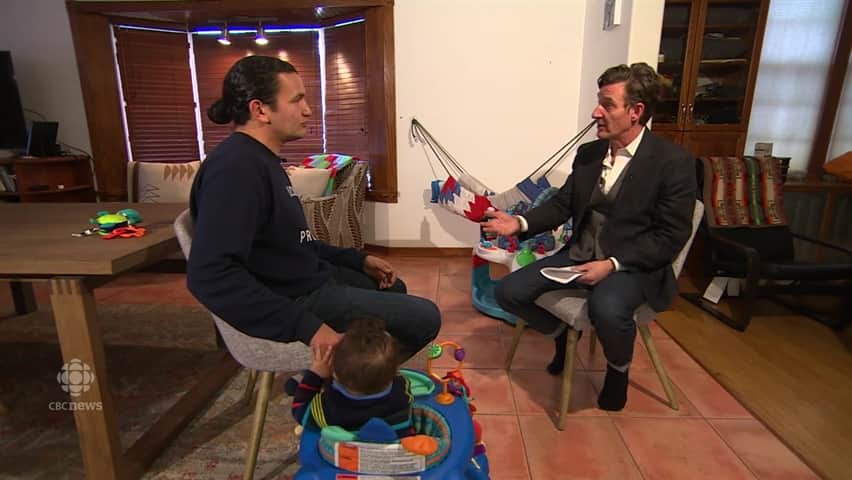 2 years ago
4:33
As 2018 draws to a close, CBC News had a chance to find out what type of year it was for the three provincial political leaders. 4:33