Wab Kinew is clear about his party's priority in the Manitoba election, circling back to the topic of health at every opportunity.

Wab Kinew is clear about his party's priority in the Manitoba election, circling back to the topic of health at every opportunity.

It's what the voters are most interested in on the doorstep and in the polls, the NDP leader told CBC Information Radio host Marcy Markusa on Friday.

"What I've heard over and over in this election, and this is even reflected in the polling that you've seen released this week, is the No. 1 issue Manitobans want us to get a handle on is health care," he said, adding he has been talking to emergency room doctors and nurses, who say there is a critical shortage of bed spaces.

The father of three, former journalist and past rapper, sat down with Markusa ahead of the Sept. 10 provincial election.

The other three leaders of Manitoba's main political parties also had one-on-ones this week. Progressive Conservative Leader Brian Pallister spoke to Markusa on Thursday, Green Party Leader James Beddome was in the studio on Tuesday and Liberal Party Leader Dougald Lamont was in on Wednesday.

On Friday, it was Kinew's turn to pitch his platform and reveal a bit about himself.

Kinew: Hopefully, it's my ability to listen to others.

K: I think, again, I always have to work on listening to others. It doesn't always come natural or easy.

M: Where are you most comfortable? Where do you feel like your true self?

K: My wife and I moved into a new home about two years ago and, since that time, it's that new place with our family. That's where I love to be."

Kinew has promised to reverse the recent closures of the emergency rooms at Concordia and Seven Oaks hospitals, hire as many as 500 new nurses, and ban mandatory overtime for nurses. Asked how quickly he wants to move on that, Kinew said he is making it a priority but not stomping on the gas pedal.

"For me, it's not about moving quickly … it's about doing it safely and responsibly," he said.

"Health care is in crisis and it's because the current government under Mr. Pallister has moved too fast with these closures. As a result of Seven Oaks and Concordia closing, now St. Boniface emergency room is turning away patients a few times a week."

The first thing to do is stabilize the situation by reopening the ERs at Concordia and Seven Oaks to create more bed spaces.

"But we're going to have to first identify the nurses and the health care aides to staff those beds. When we can do that safely, then we'll proceed with that," he said.

Asked if he can imagine a scenario in which the Concordia and Seven Oaks ERs would not reopen, Kinew said, "I don't want to rule anything out [but] we already have done our consultations and research into this project and we believe the best course of action right now is to reopen [them]."

Though it would seem to be a hefty expense to reverse those decisions and hire more staff, the NDP health care plan makes fiscal sense, Kinew said.

"We are paying tons of money in mandatory overtime, paying nurses double time right now. If we fix the staffing shortage, we'll get back top-paying nurses just regular time, which is much more sustainable financially," he said.

On the topic of fiscal responsibility, Kinew was asked how he would win back Manitobans to trust the NDP will spend wisely.

Nearly 17 consecutive years of NDP government in Manitoba came to an end in the 2016 election with the province's deficit hitting $932 million.

Since then, the deficit has shrunk dramatically and is projected to wind up at $360 million at the end of this fiscal year.

Kinew said the NDP's plan is clearly laid out and open for anyone to scrutinize.

"Right at the outset of the campaign, we put out a fully costed platform. And throughout the campaign, I've been sharing with Manitobans, who asked me a question similar to what you're asking me now, that I am balanced when it comes to the books," he said.

Pressed on the party's past record, Kinew said, "Well, I'm a new leader and over the past few years I've worked very hard to bring in a fresh new team that has a new approach.

"Our approach is balanced when it comes to the books but we have a strong emphasis on fixing health care."

Asked if the previous NDP administration under then-leader Greg Selinger overspent, Kinew said, "I think the message Manitobans sent in the last election was very clear."

The Progressive Conservative Party has targeted Kinew in a series of election ads dubbed "Wab Risk," saying he is a risk Manitoba cannot afford.

The campaign, which includes YouTube videos and targeted Facebook ads, asks whether Kinew is leadership-worthy, reminding voters of his past criminal convictions — for impaired driving and for assaulting a cab driver. He has received pardons for both offences.

He also was charged with assaulting a former romantic partner in 2003 but that charge was stayed.

Kinew has discussed some of those past troubles in his 2015 memoir, The Reason You Walk, and said on Friday the PC attack ads have given him the opportunity to show the public "who I am today."

"And in the face of very negative campaigning and attack ads … I would like to think I've shown the people of Manitoba that I can keep my cool, I can stay positive and I can continue to execute on the tasks that I need to accomplish each day," he said.

"So I'll bring those skills to the office of the premier, should I get the chance to serve."

In a recent interview, a political scientist said she wasn't sure if Manitobans are ready for an Indigenous leader.

Asked for his reaction, Kinew said, "I think Manitobans are ready for a leader who is going to build a province that works for all of us," and then went back to his talking points of improving health care. 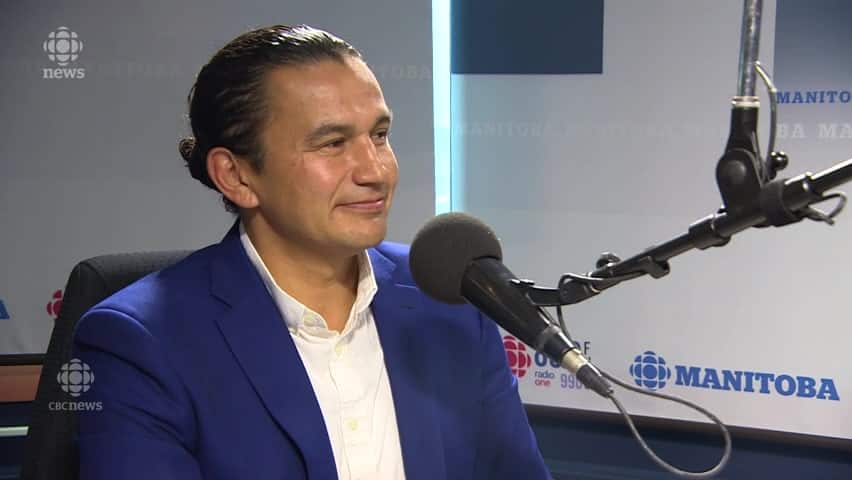 1 year ago
11:04
Manitobans head to the polls on Tuesday and the leaders of the province's four main political parties are live throughout the week on CBC Manitoba's Information Radio each morning in a bid to win over voters. Friday was NDP Party Leader Wab Kinew's turn. 11:04

He said he has faced incidents of racism on the campaign trail "but that's not my priority."

"I'm focused on providing [voters] with a strong alternative. We are just a few days out from the election and you have a two-horse race now," he said about his party and the PCs.

'You're choice now is, do you want Mr. Pallister for four more years, or do you want a leader, myself, and my team, who's going to provide a better approach on health care, on jobs and on keeping life affordable."