Some voters trying to determine if they are eligible to vote in October's federal election have encountered issues on the Elections Canada website, and a Manitoba professor worries it could leave individuals "disenchanted with the election process." 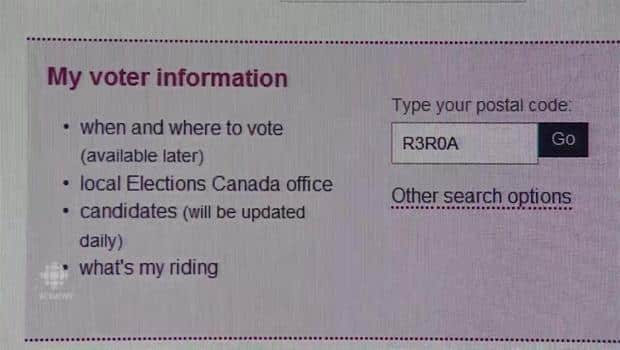 5 years agoVideo
1:56
Some voters trying to determine if they are eligible to vote in October's federal election have encountered issues on the Elections Canada website, and a Manitoba professor worries it could leave individuals "disenchanted with the election process." 1:56

Some voters trying to determine if they are eligible to vote in October's federal election have encountered issues on the Elections Canada website, and a Manitoba professor worries it could leave individuals "disenchanted with the election process."

Allison McCulloch, a professor of political science at Brandon University, said she and her husband have made several attempts online and over the phone to find out if they are registered to vote. Typically, it's as simple as plugging your postal code in on Elections Canada's website.

"I've put [my postal code] in 10 times ... made several phone calls and I still don't know," said McCulloch. "Who knows. I still could actually be properly registered — I can't even get that information."

McCulloch said she was led to a page on the site that said Elections Canada could not confirm whether she was eligible to vote. The website offered a phone number, but it also didn't help answer her questions.

"An automated message [played] that said the office is open, but, quote, 'Not set up to take your call,'" said McCulloch.

She worries that if she — as a professor of politics — can't figure out the system, she can only imagine how frustrated the issue could be to elderly voters or Canadians who don't have command of French or English, the official languages.

"These kind of repeated attempts to find out this information would leave most people incredibly frustrated and disenchanted with the election process," said McCulloch.

John Enright, a spokesman with Elections Canada, said the agency had prepared to get things up and running next month, but the election was called several weeks sooner than anticipated.

"We were actually going to open our offices on Sept. 1 to give us a 10-day or so breathing window to lead in," said Enright. "The reality is the writ of election was issued earlier and that election period is extended quite a bit."

Enright said the department apologizes "wholeheartedly" for the delays, and promises they are bringing more staff online as quickly as possible.

"It's not like we are starting from absolute scratch," he said. "We have done all the preparation we can."

Advance polls will be held over Thanksgiving Day weekend.