The time-lapse video of thousands of red-shirted Winnipeggers coming together at Portage and Main on Canada Day to form a giant maple leaf has gone viral. 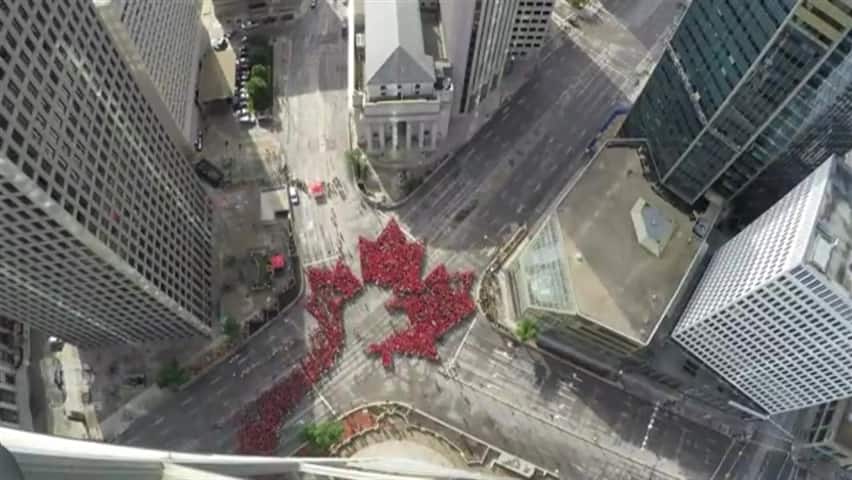 3 years ago
1:05
The time-lapse video of hundreds of red-shirted Winnipeggers coming together at Portage and Main to form a giant maple leaf has gone viral. 1:05

The time-lapse video of thousands of red-shirted Winnipeggers coming together at Portage and Main on Canada Day to form a giant maple leaf has gone viral.

"It's really great, and I think the greatest thing about it is, it puts Canada's 150th on the map, it puts Winnipeg on the map," said Winnipeg photographer Dan Harper, who shot the video.

The event was part of Canada 150 celebrations hosted by the Downtown Winnipeg Biz, which estimates 3,600 people participated. The event shut down the historic intersection for a few hours while the photo-op was set up.

Harper has been shooting the living flag on Canada Day for the last six years at various iconic locations, including The Forks and the Manitoba legislature. This year the Biz decided to use the iconic Portage and Main intersection as the backdrop.

"It's a really neat thing also for tourism, just showing people how awesome Winnipeg is and how awesome the people are," said Harper.

The video, taken from the roof of 201 Portage Ave. was widely shared on social media garnering hundreds of thousands of views on various sites.

The BBC posted the video to one of its Facebook pages, BBC Three, with a simple caption of 'This is awesome.' It has since been viewed there more than 14 million times.

"This was the first time that anything [I've photographed] has gone this broad-ranging," said Harper, who used a GoPro to take the time-lapse video while waiting for the maple leaf to take shape and snap the official photo for the Downtown Biz.

He credits the people on the ground that day for doing all the work.

"I think the biggest thing was actually creating the maple leaf on the ground so people could fit into it," he said. "To see [people] come together and then split apart like you see in the time-lapse [video] is incredible."

Harper also took a series of photos that were later stitched together with computer software to form one giant picture, called a gigapan. Gigapans are like panoramas but with billions of pixels, creating a large photo capable of showing incredible detail.

"You can actually zoom right in like a Google map, and then you can also take a snapshot or tag somebody in it," said Harper.

Harper said making the picture available for people to see themselves was important.

"It's kind of the sharing aspect and the social aspect of doing something like that," he said.