The man responsible for beheading fellow passenger Timothy McLean on a Greyhound bus has been given the OK to be transferred to a group home in Winnipeg. Vince Li, who had untreated schizophrenia, was found not criminally responsible (NCR) for stabbing McLean, 22, and eating parts of his body in 2008.

Li, in Manitoba psychiatric ward for gruesome 2008 killing of Timothy McLean, wants to live in the community 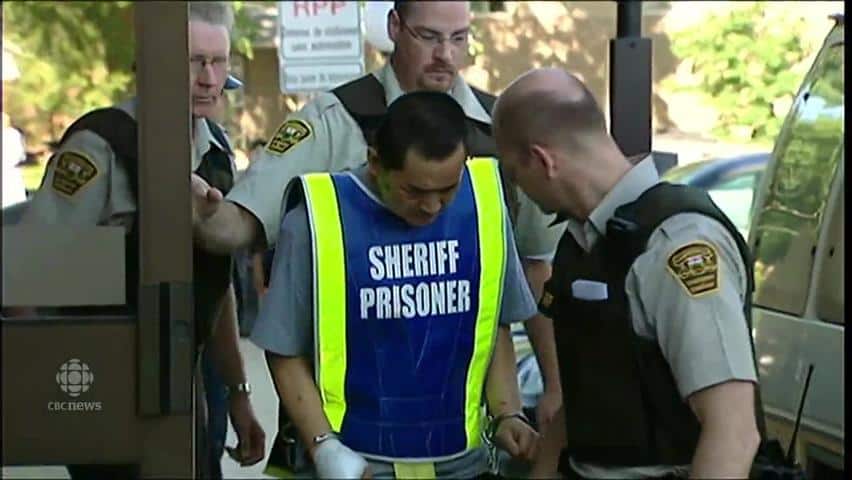 5 years ago
1:56
The man responsible for beheading fellow passenger Timothy McLean on a Greyhound bus wants to be transferred to a group home in Winnipeg. Vince Li, who had untreated schizophrenia, was found not criminally responsible (NCR) for stabbing McLean, 22, and eating parts of his body in 2008. 1:56

The man responsible for beheading fellow passenger Timothy McLean on a Winnipeg-bound Greyhound bus has been given the OK to be transferred to a group home in the city — a potential move that has stirred emotions from outrage and fears of a mob mentality, to compassion and understanding for the mentally ill.

Vince Li, who had untreated schizophrenia, was found not criminally responsible (NCR) for stabbing and beheading McLean, 22, and eating parts of his body in 2008.

Li had spent the last seven years in the Selkirk Mental Health Centre, but was moved to the Health Sciences Centre locked psychiatric ward after a February decision by the Criminal Code Review Board to give him more freedom.

Part of that decision allows his treatment team to move him to a level 5 group home in the community, with 24/7 staff and a curfew.

Why are we picking on someone with mental illness who had no choice?- George Penner

McLean's mother, Carol de Delley, confirmed she received a phone call recently from the Crown attorney, informing her that the application has been made.

In an email, the board also confirmed it: "The board, after considering the updated assessment report and the submissions of all parties, approved an increase in privileges that had been requested under the conditions communicated to you."

Ginny Kirk of Winnipeg is outraged. She met McLean briefly when they were both working at the Red River Exhibition in Winnipeg, and is the organizer of a "Justice for Tim McLean" rally at the Manitoba Legislature for Saturday, from 2-4 p.m. CT.

"I believe he [Li] should still be in a psych health unit, totally supervised and to face the consequences of his actions," Kirk said.

"If he is well enough to be out on day passes, or, as they're proposing, to go to a group home, then I believe he's well enough to go to trial and face the consequences same as any other person who's done the heinous crime."

Kirk has created online petitions calling on the provincial and federal governments to designate Li a high-risk offender and keep him in a locked facility with no day passes. She has also started the Facebook group "Justice for Tim McLean."

Kirk was shocked and horrified when she realized McLean was the victim on the Greyhound bus.

"And then when I found out what was really going on with Vince Li, where is the justice? This is ridiculous. As time has gone on, it's proven more and more there is no justice," she said.

Li is subject to annual reviews by a provincial Criminal Code Review Board.

At his most recent review in February, Dr. Steven Kremer, a psychiatrist, told the board that Li has had no hallucinations in more than a year, he takes his medication and has had "profound improvement" in his mental status.

In the last five years, Kremer said, Li has successfully managed every freedom he has been granted — from escorted walks on hospital grounds, to unescorted day trips.

Now, the board has given the hospital the authority to transfer Li to a group home under condition that he:

Level 5 group homes provide accommodation, care and supervision to adults with developmental disabilities, mental disorders or cognitive impairment related to aging. The timing of the move and the group home's location will not be made public.

"The only thing notification will do is raise ungrounded fears and vigilantism," said Debra Parkes, associate dean of research and graduate studies at the University of Manitoba's law faculty.

"If we were to go that route,  that would place it analogous to sex offenders being placed in the community, and that is a very different kind of process – one that a person has been found criminally responsible. The only times you have that kind of notification is when there is a determination that the person presents a risk whereas here you have a determination that they don't present a risk."

Parkes is worried about vigilante justice — and not just against Li.

"Frankly, I'd suggest not only is his safety at risk but potentially other Asian men who might be perceived to be him by other members of the public."

Although NCR cases often generate a lot of attention, a Statistics Canada study from 2005-2012 found 1,908 adult cases with a final decision of NCR for at least one charge (although that doesn't take into account superior court data, which involves about one per cent of cases). The rate of NCR cases is less than 10 per 10,000 adult criminal court cases.

Frankly, I'd suggest not only is his safety at risk but potentially other Asian men who might be perceived to be him by other members of the public.- Debra Parkes, University of Manitoba law faculty

Meanwhile, the first research to look in depth at NCR cases in Canada, the National Trajectory Project, finds people with an NCR verdict are less likely to reoffend than inmates released from prison.

About 17 per cent of NCRs reoffended after three years, compared to prison recidivism as high as 70 per cent for mentally ill offenders. The exception is Quebec, where NCR recidivism was twice as high (22 per cent) compared to Ontario or B.C.

Two years ago, the federal Conservatives announced the Not Criminally Responsible Reform Act — legislation meant to tighten the rules on NCR releases.

However, it misses the point because review boards are already "risk adverse," and the whole system is created to build in safeguards for both the patient and the public, Parkes said, adding it's also not retroactive to Li's case.

"In fact, there was a critique that review boards were too risk-adverse, and what the research shows is that someone found NCR does more time in custody than someone that is convicted and sent to prison," she said.

"The Crown couldn't find anybody to suggest that Mr. Li was a risk and you know the Crown is also risk-adverse in these situations. They are not agreeable to anything that would put public safety at risk and that is rightly so."

There are already threats online by people who believe Li should be punished for his actions.

George Penner hopes that won't happen, despite his own experiences with a mentally ill individual who became violent.

"Vigilante justice is not justice. The people who say things that they're out to get him, if he's released, that's like going back to mob justice that we read about in westerns," he said.

Penner's first wife and youngest son were shot to death in 1980 by a neighbour who went off his medications. The neighbour was later found not guilty by reason of insanity, which is what NCR was called before 1992.

Penner has worked hard to come to terms with his loss, which has required conscious decisions not to be bitter, angry or wanting to seek revenge. He said his Christian faith has been instrumental in that process.

"What I see happening with Vince Li is mob mentality for the most part, and people are responding to their feelings and not to rational thought," Penner said, urging compassion for Li and other mentally ill patients. "That doesn't mean that people shouldn't be held responsible for certain behaviours. Nor does it mean there aren't consequences which will follow and have already followed a person like Vince Li, but that doesn't mean we need to treat them as criminals for the rest of their lives.

"We are less vicious in terms of vigilante justice when it comes to all kinds of incidents we see happening on a daily basis because people are drunk. Why are we picking on someone with mental illness who had no choice? We don't pick on drunks. We let that happen again and again and again because they're still driving."

One of Li's friends, Tom Castor, also wants to calm any fears about him living in the community.

"When Vince is well, he is a humble, kind and gentle man. For 24 hours in 2008, he lost touch with reality and his life changed forever," Castor wrote in an email exchange with CBC News.

"His recovery meant having to face the reality of what he had done. I have seen his remorse. All of my experience tells me it is genuine. But as a father, I can only imagine how Tim's family must feel.

"This is tragic at so many levels," Castor wrote. "As a society, we are much better at justice than mercy. Vince doesn't just need mercy. He needs grace. He has been given it by God. But grace from society will be much harder to come by."

Indeed, Kirk expects hundreds of people at the rally in Winnipeg, and hopes provincial and federal politicians will listen to their concerns.

""People are telling me they're concerned he'll [Li] drop his meds again and he'll do it again," she said, adding she doesn't trust the mental-health system to manage Li in the community.