If you've attended a Winnipeg Jets game at the MTS Centre, you've probably seen him — the 94-year-old veteran saluting the national anthem, wearing his veteran's cap every single game. 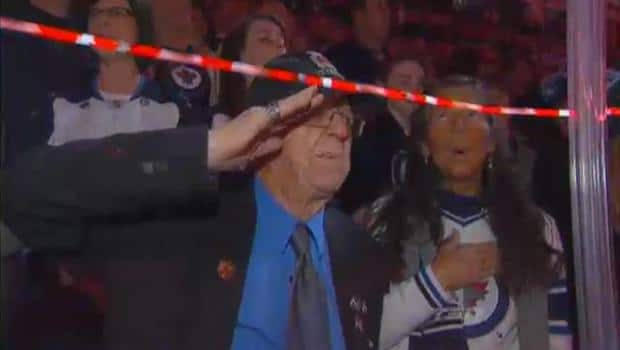 8 years ago
1:45
Veteran Len Kropioski, 94, drives to Winnipeg from Kenora for every single Winnipeg Jets home game. He's become a familiar face to many other fans. CBC's Alana Cole reports. 1:45

If you’ve attended a Winnipeg Jets game at the MTS Centre, you’ve probably seen him — the 94-year-old veteran saluting the national anthem, wearing his veteran’s cap every single game.

Len Kropioski has become a fixture on the big screen at the end of the national anthem for every Winnipeg Jets home game with his salute of the anthem followed by a thumbs up for the Jets.

That means an over two hour drive in from Kenora, where Kropioski lives.

"My nephew always says, ‘We are going whether you’re going or not,’" he said Sunday, before the team hit the ice against the Tampa Bay Lightning.

"We haven’t missed a game here."

Kropioski has rink-side seats but getting to them means running a gauntlet of well-wishers, people offering hugs and fans of the fan.

Even Mark Chipman, the part-owner of the team, knows him.

"I hope I can do that. I hope I get to watch hockey games until I’m 95 with that kind of enthusiasm," said Chipman.

"It’s uplifting. It makes it all, I don’t know, worthwhile I guess."