Unvaccinated boy not allowed at school over measles scare

A 10-year-old Manitoba boy is being kept home from school because his mother refuses to vaccinate him against measles. 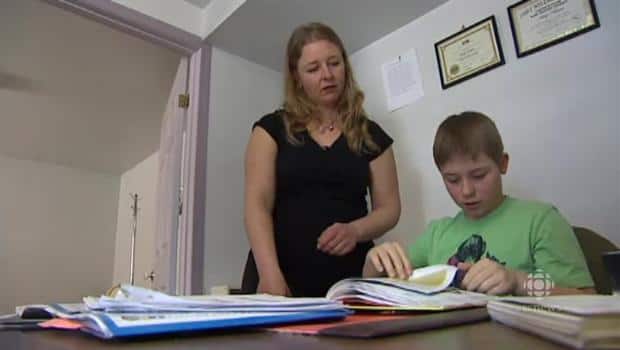 Unvaccinated boy not allowed at school over measles scare

7 years ago
1:57
A 10-year-old Manitoba boy is being kept home from school because his mother refuses to vaccinate him against measles. 1:57

A 10-year-old Manitoba boy is being kept home from school because his mother refuses to vaccinate him against measles.

Aidan Walsh is a Grade 5 student at Shevchenko School in Vita, Man., where parents were told a student may have a case of measles.

But Aidan’s mom Kim never had him vaccinated against measles because she believes he is safe with homeopathic remedies.

The province disagrees — and is enforcing a policy that says any child who hasn’t been vaccinated and could be at risk, has to stay home.

British Columbia is currently dealing with an outbreak of measles, while Manitoba and other provinces have had a handful of cases.

So far in Manitoba, there have been four reported cases of measles, and after the first two, the province’s public health officials sent a letter to parents of school-age children.

The letter told parents if there’s a risk of exposure to measles, an unvaccinated student could be asked to stay home for up to three weeks to prevent infection and ensure the child’s safety.

“It’s a bit of a scare tactic, you know. ‘If they don’t get the needle, he could get meningitis!’” said Kim.

Dr. Tim Hilderman is the medical director of Manitoba’s immunization program. He said the policy isn’t about instilling fear, it’s about saving lives — including Aidan’s.

According to provincial data, 79 per cent of children age 11 were vaccinated against measles in 2012.

Hilderman said Aidan could return to school immediately if he had the vaccine — even though it takes two to three weeks for it to kick in.

Hilderman said that’s because everyone else immunized at the school would already be safe.

“In that interim period before the immunity is full, you are not exposed in that setting because everybody else in that setting for the most part is not susceptible,” he said.

But Kim isn’t budging on the issue.

“No way, no how. No,” said the massage therapist.

That means Aidan will have to stay home for two to three weeks and try to get through his course work with help from his mom.

It could be several more weeks if another case of measles is reported at the school.

In the meantime, Kim will do her best to keep him up to date on his course work.

The province issued a statement on the situation late Thursday, saying, "Vaccination is voluntary in Manitoba as is the case in other Canadian jurisdictions. Public health officials in Manitoba do encourage vaccination as it is medically considered the best line of defence among any number of communicable diseases."

The statement also said, "Vaccination is something that is an individual or parental decision."