Resident doctors at the University of Manitoba spent the day showing CBC's Rick Mercer how to suture, deal with a code blue, make a cast and conduct a neurological exam. The episode airs tonight on the Rick Mercer Report. 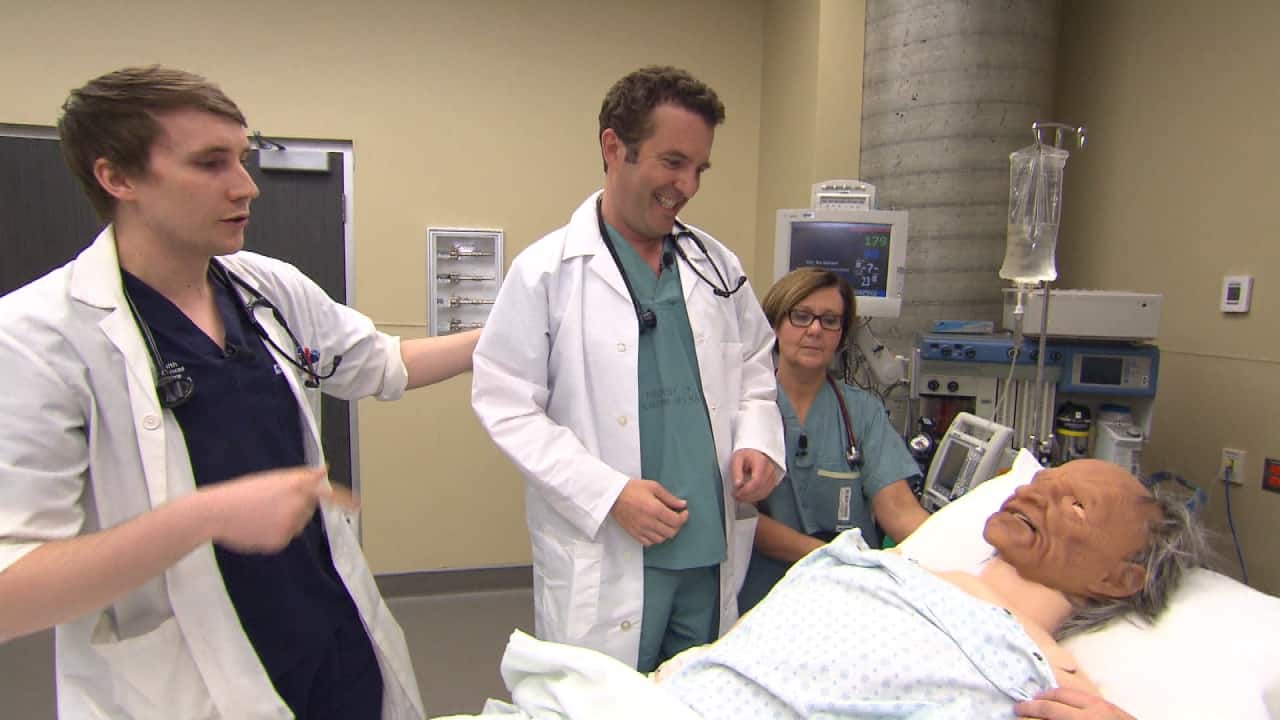 5 years agoVideo
6:59
Rick Mercer stopped by the University of Manitoba’s Faculty of Health Sciences to get a taste of life as a doctor in residence. 6:59

When Dr. Leslie Anderson sent an email to the Rick Mercer Report months ago, asking if he would come spend a day with residents at the University of Manitoba, she wasn't sure what would happen.

"I sent them an email asking if Rick has ever saved a life or seen a real human colon," said Anderson, the co-president of the Professional Association of Residents and Interns of Manitoba. "I said, 'Does he want to?'"

Mercer ended up filming a segment of Tuesday's episode with Anderson and other resident doctors at the university last week.

"I was over the moon with excitement," Anderson said.

Resident doctors spent the day in the university's simulation lab, showing Mercer how to suture, deal with a code blue, make a cast and conduct a neurological exam.

"He managed to suture his glove to the beef tongue," Anderson said with a laugh. "I have to say, the cast that he made, he made some innovative improvements to it that might catch on — he added a pen holder and a cup holder."

Anderson invited Mercer to the university for Resident Awareness Week, which runs Feb. 15-19.

"We want people to understand that residents are recently graduated doctors who are doing training in the specialty of their choice," she said, adding that she's in pathology, which focuses on diagnosis.

Patients often ask residents when they will get to see their doctor without realizing that residents are doctors, Anderson said.

"We work as a team, and residents do have the authority to make decisions about patient care. Our decisions are just overseen," she said.

Anderson, a long-time fan of the Rick Mercer Report, said he was gracious and friendly but asked her some tough questions in an interview for the show, such as how patient care is affected if residents are working shifts that are 24 hours long.

"The answers [weren't] always easy to give," she said.

Mercer may have received a day of training but if you're in trouble, Anderson suggests avoiding any medical help from Mercer.

"He's very distractible," she said with a laugh. "It was hard to keep him on track."

The episode of the Rick Mercer Report airs tonight at 8 p.m. on CBC TV.