More than a dozen unions, representing 110,000 government workers, nurses, teachers and others across the public sector, said the government's plan undermines collective bargaining rights and is unconstitutional.

"The Charter of Rights and Freedoms ensures that free and fair collective bargaining can take place through the right of association ... and we believe this Public Services Sustainability Act infringes on that right," Kevin Rebeck, president of the Manitoba Federation of Labour, said.

The act was passed by the legislature in the spring. It hasn't yet officially become law, but Rebeck said it has already had an impact on contract talks. Employers in recent months have refused to discuss any wage increases, he said.

​The legislation would impose a two-year wage freeze across the public sector as each collective agreement expires. That would be followed by a 0.75 per cent pay increase in the third year and one per cent in the fourth.

The unions' statement of claim asks the Court of Queen's Bench for an injunction against the bill and a declaration that the wage freeze is unconstitutional.

Premier Brian Pallister has said the restraint is needed as part of his plan to end almost a decade of consecutive deficits started by the former NDP government. He has urged public-sector workers to join him as part of an "all hands on deck" approach to balance the budget by 2024 as he promised during last year's election campaign.

"This legal challenge to a bill that is not yet law is an unfortunate distraction from the real priorities of most Manitobans," Olivia Billson, a press secretary with the provincial cabinet, wrote in an emailed statement Tuesday.

The government is interested in continuing its discussions with labour leaders but any further comment would be "premature pending further legal review," she added.

Previous court rulings have upheld the ability of governments to impose collective agreement provisions, but only under certain circumstances.

In 2007, the Supreme Court of Canada overturned a British Columbia law which gutted parts of collective agreements for health-care workers. The high court ruled the government interfered in the workers' right to bargaining.

The government was not prevented from legislating labour provisions but, in essentially replacing negotiated contracts, it had a duty to consult the unions before it acted, the high court ruled.

Manitoba government representatives have met four times in recent months with public-sector union leaders to discuss the wage freeze. Rebeck said the hearings were nothing close to consultation.

"We've brought forward good ideas and wanted to engage in a dialogue ... but we haven't received any feedback on our proposals, we haven't met with a decision-maker and we've been frustrated by a process that hasn't been meaningful at all." 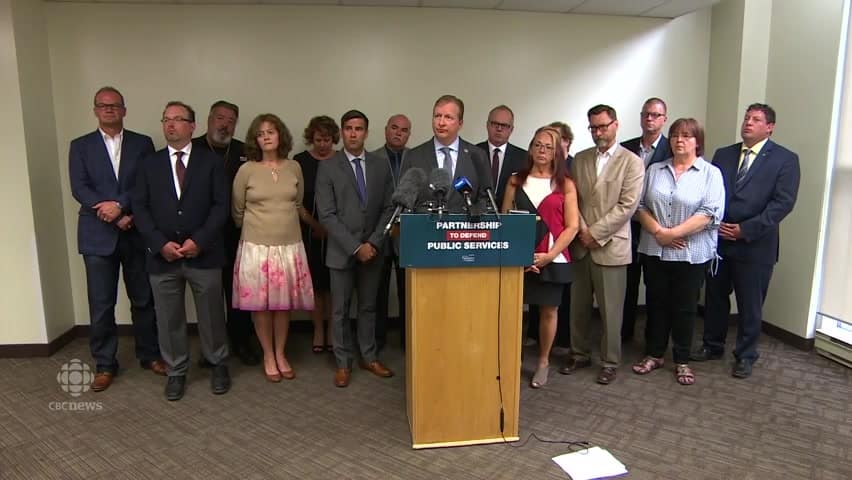