Shoplifting has become such a problem at Winnipeg-area grocery stores that a union representing retail workers is calling for changes to improve safety and reduce theft.

Shoplifting has become such a problem at Winnipeg-area grocery stores that a union representing retail workers is calling for changes to improve safety and reduce theft.

Employees are advised not to intervene in thefts, said Jeff Traeger, president of the United Food and Commercial Workers Local 832, so he thinks more police in stores are needed to solve the problem.

"It's gone too far" for "trying to address the root causes to be a good short-term solution," Traeger said. "Right now [the solution] means police in stores."

UFCW also represents the security guards working at the stores, who Traeger said are "visual deterrents" but have no authority to actually stop anybody engaged in a theft.

The union represents 8,000 employees in Manitoba who work at Red River Co-op and the stores underneath the Loblaw brand, including the Real Canadian Superstore, Shoppers Drug Mart, Extra Foods and No Frills.

Unlike Liquor Marts, where people have been swiping from shelves, at grocery stores thieves have been accessing back rooms, Traeger said.

"We now have found shoplifters that walk into the employee-only areas and are stealing from that area and going out a fire exit or a back door," he said.

Loblaw officials said they do occasionally use company-paid Winnipeg police officers but did not say whether that is something they would do more frequently.

Bronwyn Dobchuk-Land, an assistant professor of criminology at the University of Winnipeg, said adding police isn't the right way to approach the problem.

"The idea of putting police in stores sounds good, but extending the idea to the scale it needs to be viable.... It's not surprising to hear this from a union, but it is disappointing," she said.

Dobchuk-Land said the root causes of crime include poverty and homelessness caused by austerity and public investment in policing doesn't make sense based on evidence.

"We're in the midst of a social crisis, a crisis of inequality, a crisis where people don't have enough to eat and are so beaten down by being overly policed that they're participating in vengeful acts of theft," she said.

Even if stores are paying for police, more security won't solve the problem, she said.

"It's not effective and it's likely to lead to increased tensions, increased racial profiling, regarding a problem that is fundamentally about poverty and inequality," Dobchuk-Land said.

Traeger said the most brazen theft he's been told about is a shoplifter who carried out multiple large-screen televisions in front of staff.

"There have been instances in grocery stores with people exhibiting behaviours of someone who's under the influence of drugs or alcohol," he said.

Traeger believes there has been little action taken because the solution to the problem is much more costly than theft.

"Our focus is really entirely on making sure that the members that we represent get home from work safe every day, and that more importantly, they can work without fear," he said.

"Our members, especially cashiers that work at the front, are in harm's way.... They're frankly scared to even walk across the parking lot, scared to go in the back room."

Workers are frustrated, angry and disappointed that the situation has escalated to this level, Traeger said.

In February, he sent a letter to Loblaw and Red River Co-op, suggesting changes, including having cashiers work near one another, not isolating employees and improving lighting around stores.

Loblaw officials wrote in an email to CBC they understand the concern, and the potential risk to employees and customers takes precedence over damage to their bottom line.

"We have a number of measures in place to detect and prevent theft and other types of crimes in our stores. These measures include trained security staff, CCTV video technology and sophisticated anti-theft technology," the email says.

Red River Co-op did not immediately respond to a request for comment. 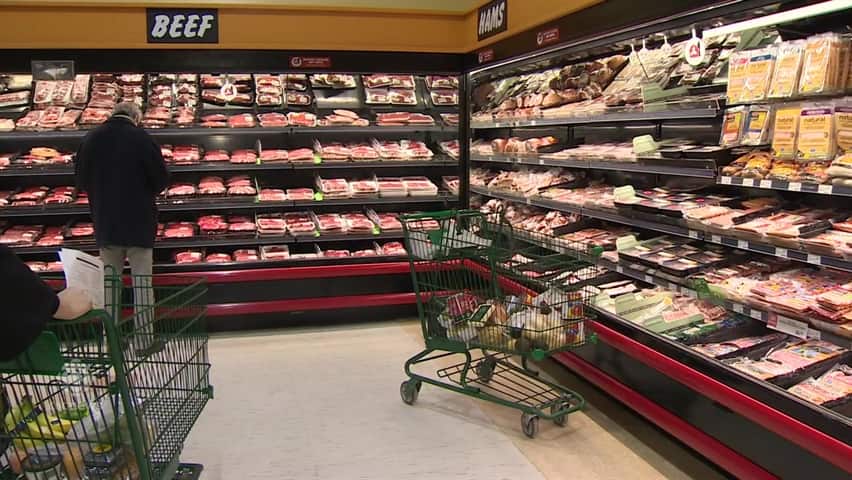 1 year agoVideo
2:15
Shoplifting has become such a problem at Winnipeg-area grocery stores that a union representing retail workers is calling for changes to improve safety and reduce theft. 2:15
CBC's Journalistic Standards and Practices|About CBC News
now