UFO sightings in Manitoba date back to 1792

A new report suggests UFO sightings in Manitoba are older than the province itself.

Just over 2,000 reports of unidentified flying objects in Manitoba over the past 200 years 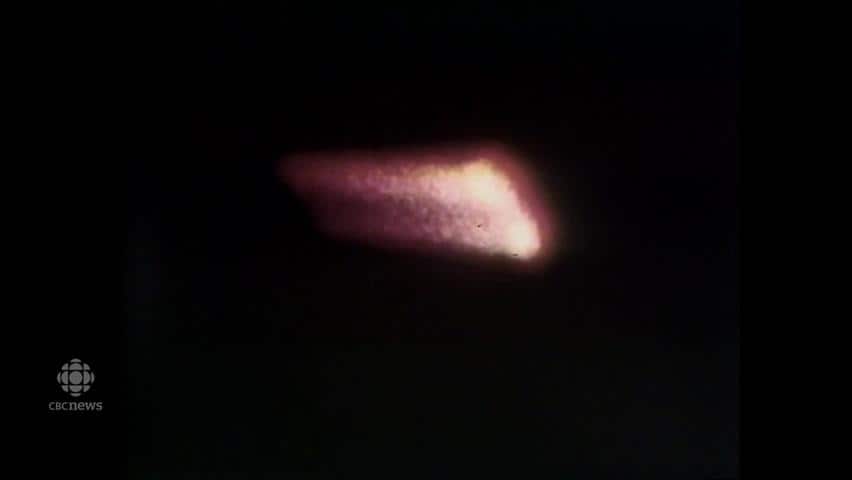 6 years agoVideo
7:37
This CBC-TV feature report from March 1983 looks at some of Manitoba's well-known UFO sightings, including "Charlie Redstar" in Carman. 7:37

A new report suggests UFO sightings in Manitoba are older than the province itself.

Ufology Research, based in Winnipeg, says there have been just over 2,000 reports of unidentified flying objects in Manitoba over the past 200 years.

Chris Rutkowski has been researching the phenomenon for 25 years, compiling an annual Canadian survey of sightings.

He says records from the government, the RCMP and the United States show Manitoba has a long history of sightings.

"It's not a recent phenomenon," he said. "It's not a phenomenon that's a product of television and movies that are going on right now. These things go back quite a number of years. People have been fascinated with things in the sky and wondering, 'Are we alone in the universe?"'

The earliest documented encounter came in 1792 from two explorers, David Thompson and Andrew Davy, who were in northern Manitoba where they said they saw several bizarre meteors crash into the ice.

Thompson's diary details how the two were surprised one night by a brilliant "meteor of globular form" that "appeared" larger than the moon."

"It struck the river ice, with a sound like a mass of jelly, was dashed into innumerable luminous pieces and instantly expired," the diary says. "The next morning we went to see what marks this meteor had made on the ice, but could not discover that a single particle was marked."

Rutkowski says other sightings were reported by police, pilots and average people, who saw everything from unusual lights in the sky and flying saucers to silver-suited aliens.

The witness reports, which have common themes and descriptions, suggest "we are being visited," Rutkowski said.

"That doesn't mean that aliens are invading Canada in any way, but it simply means there are unusual reports of things in the sky," he said. "It certainly says that we probably are not alone in the universe and that there probably are some sort of alien civilizations out there somewhere but there is no proof of that."

The latest report on Manitoba sightings found most occurred during the summer months, between 10 p.m. and midnight.

Here are some of the other sightings outlined in the report:

May 20, 1967: Stefan Michalak was near Falcon Lake at 12:15 p.m. when he saw one of two disc-shaped objects land on a large flat rock. He hid while he sketched what he saw. He eventually approached and heard two human-like voices. He was hit by hot gas, which set his clothes on fire. His ailments later included weight loss, peculiar burn marks on his chest and stomach, charred hair, an odd rash and recurrent dizziness. Some radiation was found at the site.

April 10, 1975: Bob and Elaine Diemert were walking from their farmhouse to their private airfield in Carman and saw a big red light coming at them. It had a dome on top and was pulsing. The Diemerts continued to see saucer-shaped objects a few more times. Then, starting May 7, 1975, nightly sightings began that lasted for months. People gathered at the couple's field for UFO-watching parties and to spot "Charlie Redstar" as it skimmed over trees on the horizon before soaring overhead.

March 4, 1977: Mr. S was driving eastward towards his farm near Sundown when he saw a vibrating and shimmering oval source of light about five metres directly ahead of him. It made no noise and did not look to be solid. He continued driving and came upon three "people" standing on the road before him. He said they were about five feet tall and shaped like bowling pins. He also said they had bulbous heads, a narrow neck and a flared body "like a skirt." No features were visible. He couldn't brake and drove right over them. He said he felt no impact and they seemed to "disappear" when they touched the front bumper.

October 9, 1989: A family was visiting the Fort Whyte Nature Centre at 2:50 p.m. when they saw a white boomerang-shaped object hanging in the air over Winnipeg. The children were told to get into the car, so they wouldn't see the frightening craft. As the adults watched, the object slowly rotated and showed a bulge on its underside.

Nov. 1, 1992: Karen, a nurse living in Winnipeg, was wakened at about 2:00 a.m. by a loud thump on her door. She got up and found two "little people" about 3 1/2 feet tall in the living room. They had large round eyes, but no other features. They wore long white gowns or robes. They "told" her through telepathy that they wanted to take her for a ride into space. Karen said she next was in a large hangar-like room that contained a cigar-shaped craft. She and the two beings got in. She saw a control room with chairs, screens and buttons. The creatures pushed the buttons and she soon saw many stars on the screens. Suddenly, she found herself back in her room.

Feb. 25, 2012: It was about 7 p.m when two witnesses in Winnipeg observed a flat, disc-shaped object with red lights around its perimeter. It was flying along horizontally, but turned on its side and darted towards their vehicle. The craft vanished before their eyes when it was within five metres of them.