Reclaiming their voices: Therapeutic choir gives people with Parkinson's something to sing about

A therapeutic choir called U-Tunes that helps people with Parkinson's disease strengthen their voices opens a second location on Thursday.

Sandra Breen has always loved music but started losing her voice when she was diagnosed with Parkinson's disease in 2012.

"It was quite scary, and still is in some instances," Breen said.

But with the help of a therapeutic choir, she's gotten some of her voice back.

"This has really helped and I'm much more comfortable trying to sing … with other people around who have problems also," she said.

Every week, she goes to U-Tunes — a therapeutic choir at Winnipeg's Whyte Ridge Baptist Church — with her husband and caregiver, Tom.

"He doesn't sing very well and he's learned to sing better than I think I have," she said with a laugh.

"I'm shocked," said Tom. "I always thought I was a good singer," he joked.

WATCH | The U-Tunes choir in session: 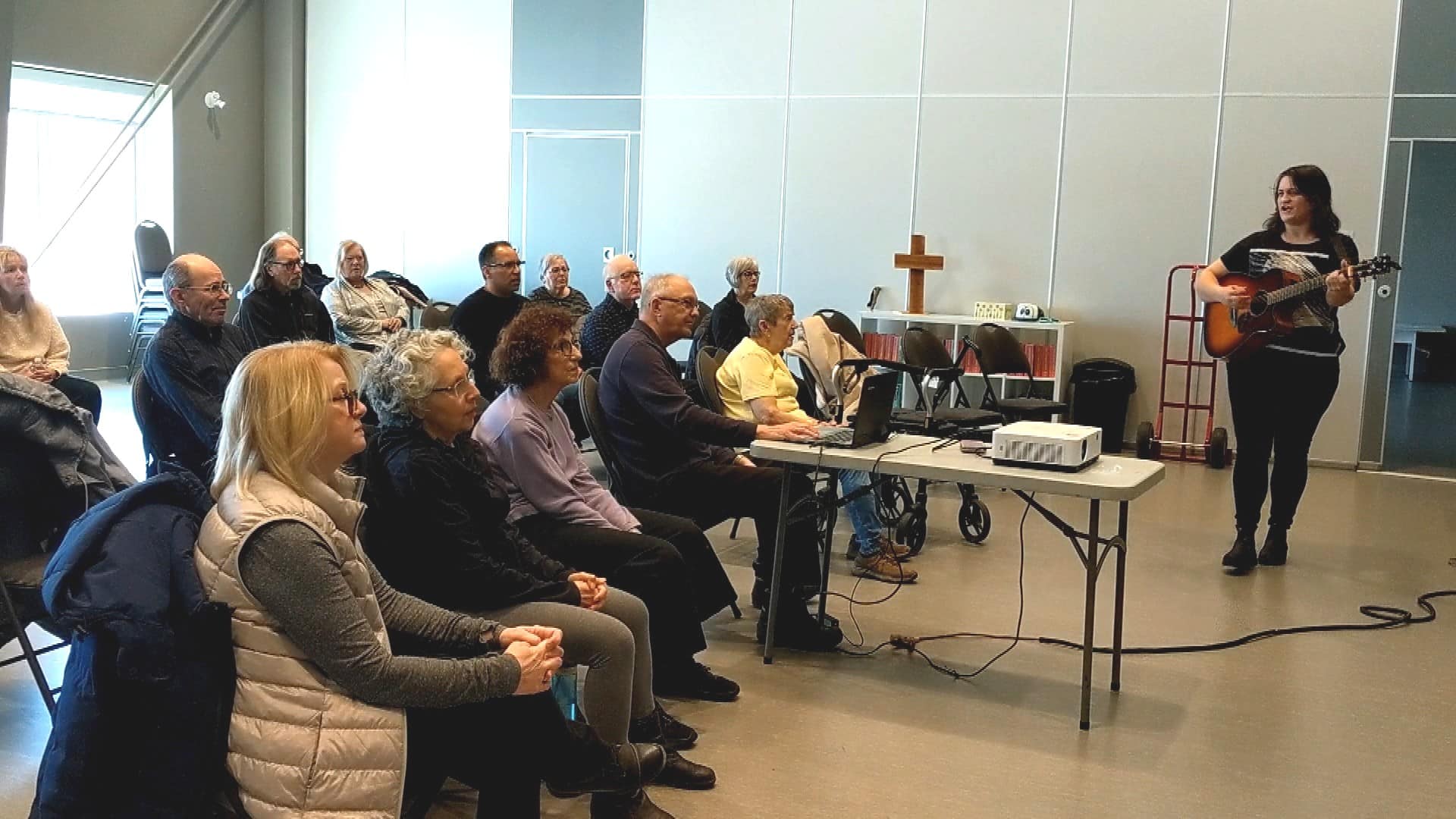 U-Turn Parkinson's is the charity that runs U-Tunes, along with boxing, yoga, and strength and balance classes for Manitobans with the disease.

Now the program's reach has expanded to north Winnipeg, with U-Turn Parkinson's offering its boxing and singing classes at Concordia Village, on Molson Street near Concordia Avenue, as of Thursday.

Anthem for those with Parkinson's

Winnipeg musician Heitha Forsyth, who performs as Sol James, is the choir director and program manager at U-Turn Parkinson's.

The choir sings a song Forsyth wrote specifically for people with Parkinson's, titled I Won't Let Nothing Make a Lesser Person Out of Me.

Forsyth originally wrote it as part of an assignment for her education in music therapy, inspired by the people she met who live with Parkinson's disease.

"It turned into an anthem that we use in our group," Forsyth said.

"I wanted to write a song that really reflected the effort and passion of the people who live with Parkinson's, and how they choose to live every day meeting their disease head-on."

Sandra Breen said she was moved when she first heard Forsyth's song about a year ago.

"It was very emotional that she would think enough of … what she was doing here to write a song," Breen said. "She seemed to understand what was going through all of our minds, and she put it to words."

Forsyth is the reason most of the participants in U-Tunes return to the weekly choir, Breen says.

Tom, her husband of 50 years, is another reason she keeps coming back to U-Tunes.

"One of the benefits of coming here is there isn't any kind of peer pressure," said Tom.

Parkinson's disease is a neurodegenerative disease, with symptoms that can include tremors, stiffness, impaired balance and rigid muscles, according to the organization Parkinson Canada.

Forsyth uses music and the act of singing to increase the stamina and strength of the muscles involved with speech and swallowing. U-Tunes involves singing warm-ups, physical movements and repertoire singing.

"This is kind of a full-body workout, but you don't realize it," Forsyth said.

Charles Norris has performed in choirs for many years, but thought he would have to quit singing when he was diagnosed with Parkinson's three years ago and his voice weakened.

"It felt like I was losing something, all right — losing a part of my life," Norris said.

Norris has been in U-Tunes for almost two years.

"I've been very happy with seeing my voice come back and this choir has been really, really good," Norris said. "I can speak much louder and sing better, too."

"The fact that they keep coming back and more and more people keep showing up, that just makes me feel really good and that I'm on the right track and I'm doing something right," said Forsyth.

Danelle Cloutier is an associate producer and audio technician in current affairs at CBC Manitoba. She has a background in audio engineering and journalism.