A Manitoba athlete didn't make the podium in the Olympic men's triathlon in Rio, but his family and friends back home cheered him on as if he had won the gold medal. 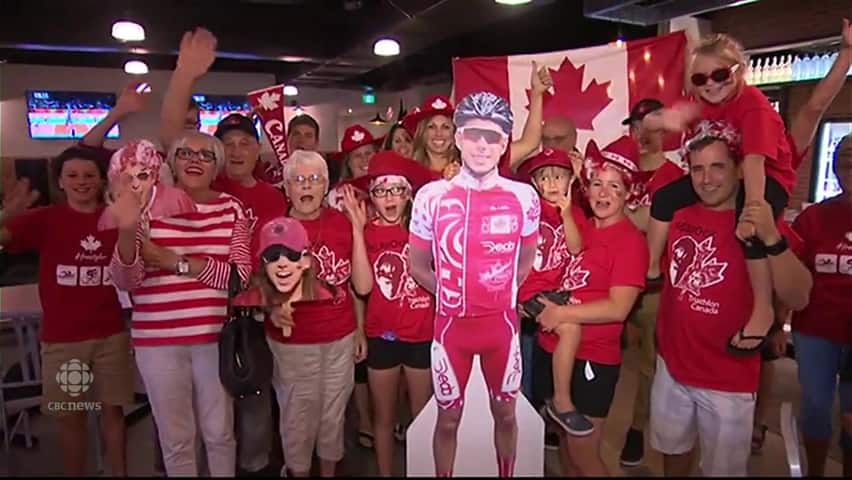 4 years agoVideo
1:33
Some of Tyler Mislawchuk relatives and friends gathered at the Frantz Inn in Steinbach, Man., to watch him compete in the Olympic men's triathlon. 1:33

A Manitoba athlete didn't make the podium in the Olympic men's triathlon in Rio, but his family and friends back home cheered him on as if he had won the gold medal.

Tyler Mislawchuk, 21, from Oak Bluff, Man., was 15th in the men's triathlon final on Thursday morning with a time of 1:47:50, two minutes and 49 seconds behind the winner.

Mislawchuk's immediate family went to Rio to see him compete, but some of his relatives and friends donned red and white T-shirts as they gathered at the Frantz Inn in Steinbach to watch the triathlon on big-screen TVs.

"It's extraordinary, all the hard work he puts in — his international travel, he's never home, he sacrifices so much — and it's just amazing to see what he's accomplished," said Chera Arabsky, one of Mislawchuk's first cousins.

"He makes us look lazy, or feel lazy," she added with a laugh.

Jim Leddy, Mislawchuk's grandfather, said it was emotional watching him in the Olympics.

"We only see him maybe two weeks a year, [when] he's back home again, but he's done a great job. I'm very very proud of him and all the athletes," he said.

"We've got a deeper understanding now of what the athletes go through," he added. "He went through a broken jaw, three broken ribs when he ran in the Pan Am [Games]…. We're very proud of him."

Leddy said his grandson picked up his love of sports as a student in Vincent Massey Collegiate's sports program, and he admired Canadian Olympic gold medallist Simon Whitfield.

Mislawchuk, a first-time Olympian, was the youngest competitor in the triathlon in Rio.

He had two World Triathlon Series 10th place finishes this season, in Abu Dhabi and Yokohama. He was also 10th at last summer's Pan Am Games.

Sarah-Anne Brault, who is from Quebec City but lived and trained in Manitoba from age eight to 18, will compete in the women's triathlon final on Saturday.