One of Winnipeg's busiest train crossings also one of Canada's riskiest

A CBC News investigation looks at a list of high-risk rail crossings developed by Transport Canada in 2014. One of Winnipeg's busiest train crossings also one of Canada's riskiest

Heather Daymond knows first-hand how dangerous that crossing can be. But what she and the other 30,000 drivers who cross the tracks daily don't know is that of the approximately 17,000 public crossings in the country, this south Winnipeg location was considered to be in the top two per cent of crossings in terms of risk factors in 2014.

"The sound of that train hitting the van is one that never leaves you," she said, referring to her December 2014 collision. "It spun me 180 degrees and then set me down."

Daymond's van was caught in traffic on the tracks when the crossing arms came down, stranding her in the path of an oncoming train.

The train struck the rear of her van and she was miraculously uninjured. She questioned why the approach to the crossing can't be fixed so it doesn't continue to strand motorists like her on the tracks.

"If it's going to put safety at risk for residents of Winnipeg or anyone, then why is it here?" she said. "Why can't this change?" 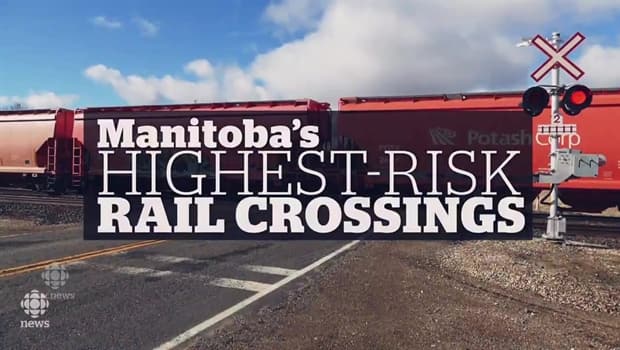 5 years agoVideo
1:09
One of Winnipeg's busiest street-level rail crossings, at Waverley Street and Taylor Avenue, was also assessed by the federal government as being among Canada's riskiest, according to federal data obtained by CBC News. 1:09

Transport Canada generated a list of 500 highest risk rail crossings as part of a 2014 analysis of its crossing improvement programs, 83 of which were located in Manitoba based on the assessments. However, a Canada-wide CBC News analysis has found that in many cases local governments are not always aware of these high risk locations.

Crossing safety in Canada is the shared responsibility of road authorities, municipalities, rail companies and Transport Canada, but the federal data was found to not routinely be made public or shared.

The list was generated in 2014 by Transport Canada in part by a risk assessment computer model called GradeX, which was developed to assist with targeting improvements to higher-risk crossings. The GradeX system is only made available internally to Transport Canada staff.

In order to assess risk factors, the model evaluates factors such as volume or road rail traffic, train speeds, number of tracks and warning devices present. The federal agency explained that changes made to crossings or other new variables after 2014 are not reflected in the ranking, and that a reassessment today would not necessarily yield the same results.

Officials did not accept interview requests Tuesday, but they further explained their ranking system in a written statement.

"Risk factors do not necessarily mean a crossing is unsafe," according to the statement sent out by the media relations department. "When you compare two different crossings against these risk factors, you may deem one crossing to be higher risk than the other. These characteristics are not compliance related. That is to say a crossing that is deemed as a higher risk is not unsafe.

Two years after Daymond's accident, the City of Winnipeg approved a $153 million underpass for the crossing, citing traffic snarls, safety concerns and long delays. The city found there were approximately 30,000 vehicles and 35 to 40 trains moving through the intersection daily.

Two of the other Winnipeg crossings on the federal list are still at street level.

CBC contacted the City of Winnipeg and they asked us to forward the Transport Canada 2014 risk rankings for their review.

New grade crossing regulations require municipalities to send remediation plans to Transport Canada at the end of 2016 and the city said they are on track to meet the deadline.

Manitoba Highways is listed as the road authority on 16 high-risk crossings, but a provincial spokesperson from Manitoba Infrastructure and Transportation told CBC they do not have a "specific list."

"Generally speaking, Manitoba works with Transport Canada to identify crossings where risk to motorists could be reduced by grade crossing improvements," the emailed statement said in part.

Three of those crossings are in the City of Winnipeg. The crossing at Waverley and Taylor ranks 309th on the list of 500, according to the 2014 analysis.

Transport Canada told CBC in an emailed statement that they regularly communicate with municipalities through its national association.

'Get it out there' urges TSB

"There's no point in keeping valuable safety information secret. Get it out there," urged Dan Holbrook, western regional manager with the Transportation Safety Board (TSB), adding he had only recently become aware of the system.

The TSB investigates train crashes after they happen and issues recommendations to improve crossing safety. Holbrook said investigators always issue public advisories if they find problems at a specific crossing.

"I think if critical safety information is in the public domain, it's a benefit to everybody," he said. "We at the safety board are of the view that more needs to be done.

"There's risk at public crossings that we should all take seriously and … we should all get together to try and improve each of these installations," he said. "Certainly, Transport Canada's got to get the message out there and ensure that every road authority is prepared to come to the table and do what needs to be done, do their part."

With files from Katie Nicholson and Vera Lynn Kubinec