A Manitoba town is doing some big thinking when it comes to housing its seniors.

New Niverville, Man., facility will keep seniors in the area 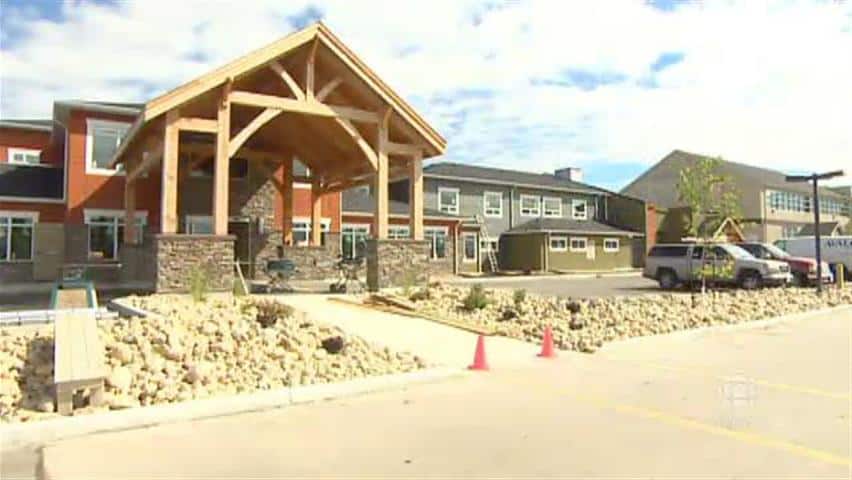 8 years ago
2:06
Manitoba town of Niverville will soon be cutting the ribbon on its brand-new personal care home — a $13.8-million, 80-bed facility built entirely without any government money. 2:06

A Manitoba town is doing some big thinking when it comes to housing its seniors.

Niverville will soon be cutting the ribbon on its new personal care home — a $13.8-million, 80-bed facility built without any government money.

The Heritage Life Personal Care Home will include the country's first special-care unit tailored for aggressive Alzheimer's and dementia patients. Though it doesn't open until next month, there's already a waiting list to get in.

The town of 4,700 people and its surrounding community, located about 30 kilometres south of Winnipeg, was in a catch-22 situation in which it didn't have enough seniors aged 75 or older to warrant a provincially funded care home.

But the reason it didn't have people 75 and older was because it didn't have a personal care home. Without such a facility, all of its seniors were being forced to move elsewhere.

"People in the community, being so close to Winnipeg and other surrounding areas, said, 'If there isn't going to be a personal care home, we're not going to live here until 75; we'd have to leave,'" said Gordon Daman, a former mayor of Niverville who is now vice-president of the board that is overseeing the new home.

Resident Wally Pauls said his wife has Parkinson's disease and is receiving around-the-clock care at a care home in Grunthal, a community about 35 kilometres away, because no such facility currently exists in Niverville.

As a result, Pauls said he and his wife of 60 years have been living apart for the last four years, and he's been driving to Grunthal and back four to five times a week just to see her.

To get the home built, residents in the community chipped in while contractors agreed to drop their rates by 25 per cent.

"This isn't just about Niverville, this is about the region. We have seen such stellar support from our community," Daman said. "There was such pent-up demand to be able to see our elders remain in the community."

The organizing group started the process by first buying an old facility in St. Adolphe to obtain a licence and be able to build the facility in Niverville.

In the end, the project's cost works out to $150,000 for each personal care bed, as opposed to the $400,000 per bed typical cost when the province builds a personal care home.

To keep it operating, the province will provide $3 million a year in grants.

"It is a provincially supported and provincially monitored facility," said Daman. "The standards are set by the province, but it is privately owned."

"It's been humbling, it's been gratifying, and the community has been absolutely blessed by this," he said.