Manitoba Liquor and Lotteries is moving its headquarters into the Medical Arts Building in downtown Winnipeg, quashing rumours that the Crown corporation was considering space in a complex being planned by True North Sports and Entertainment. 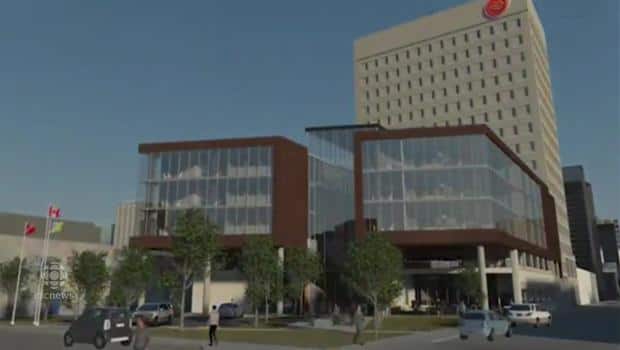 5 years agoVideo
1:54
Manitoba Liquor and Lotteries is moving its headquarters into the Medical Arts Building in downtown Winnipeg, quashing rumours that the Crown corporation was considering space in a complex being planned by True North Sports and Entertainment. 1:54

Manitoba Liquor and Lotteries is moving its headquarters into the Medical Arts Building in downtown Winnipeg, quashing rumours that the Crown corporation was considering space in a complex being planned by True North Sports and Entertainment.

The location of the Crown corporation's new home base was unveiled on Tuesday by Premier Greg Selinger and Ron Lemieux, the minister responsible for Manitoba Liquor and Lotteries Corp.

The purchase price of the 15-storey building, attached parkade and surface parking lot at 233 Kennedy St. was $7.9 million and officials estimate it will cost $66 million to renovate and expand it to accommodate about 400 employees who will be moving in.

"More people, more activity, more vibrancy, more excitement, with a redefined purpose as the Sports and Hospitality District — that's exactly what we want, and I think this facility and this investment will be a part of that story," he said.

"There's 16,000 people living downtown right now and we've got programs in place that we're partnering with the city on that are creating even more opportunities for people to live and work downtown, and that is going to be the future."

About 40 tenants who are currently in the building were notified Tuesday morning. Manitoba Liquor and Lotteries said less than 50 per cent of the space is currently occupied, and it won't ask tenants to move out.

The plan is to redevelop the first five floors, expanding them north into the surface parking lot. The main and second floors will house businesses, while the second to fifth floors will house Manitoba Liquor and Lotteries offices as well as a daycare.

The top 10 floors will remain as offices for current and new tenants, according to officials.

The Crown corporation was formed following the merger of the Manitoba Liquor Control Commission and the Manitoba Lotteries Corp., which was announced in 2012 and took a year to complete.

Officials said having all its employees under one roof will "strengthen its workplace culture and generate cost savings by eliminating travel for staff between multiple sites," the corporation stated in a news release.

There had been speculation the Crown corporation was considering space at True North Square, a massive office and residential complex planned by True North Sports and Entertainment, owner of the Winnipeg Jets.

That project, tentatively set to begin in 2017, will be located adjacent to the convention centre.

True North confirmed on Tuesday that it had submitted "a fairly comprehensive bid" for the Liquor and Lotteries headquarters project.

In a statement, True North said it will continue to work with Manitoba Liquor and Lotteries and the provincial government "to advance any and all opportunities we may have together within the SHED for the development and expansion of True North Square and downtown Winnipeg.

"We will continue to move forward with our development planning for True North Square. We are in advanced discussions with office and retail tenants and have also already identified our hotel developer and investor partner," the company added.

A True North spokesperson would not say which hotel is getting involved in the project.

Manitoba Liquor and Lotteries officials said nine properties had submitted bids, but the Kennedy Street building was chosen because it provided the best value.

Officials said they cannot talk about the other bids, nor could they say whether True North Square was even considered as an option.

When asked by reporters if not selecting True North Square was a missed opportunity, Selinger said no.

"Everybody made their best bid to the corporation. Liquor and Lotteries Corporation picked the proposal they thought would be the best value for Manitobans," Selinger said.

"We think it will complement other private decisions that are being made about investing downtown and add to that critical mass of people working and living in the downtown area, which is good for everybody."

The corporation plans to sell its current office on Empress Street and lease its office on Buffalo Place, officials said.

With files from the CBC's Nelly Gonzalez