Children sometimes throw a rock in a pond and watch the ripples. B.C.-based Tolko Industries just threw a boulder into the Saskatchewan River next to The Pas, and the waves are crashing over its banks and into the town.

If you want to catch the mood in The Pas, stake out the front of the Canada Post building.

People from all over the region come to grab their mail and news — good or bad — is passed along.

The news is bad these days, after Tolko Industries announced it's pulling out of town of about 5,500, shutting the biggest employer behind it. All 332 employees at the local forest products mill will lose their jobs and the town will lose countless spinoffs.

Lyle Kelly checked his post box in the community and stopped to reminisce about the town's better days.

Kelly moved to the Pas, located about 624 kilometres northwest of Winnipeg, more than three decades ago. He sold off the family cattle and dairy business in the south (he broke even on the sale), borrowed a couple of thousand dollars and got into the appliance repair business.

His love of this northern town is obvious.The fishing is fantastic and he made a good living until he retired last year. And Kelly really likes the people.

"There are a lot of people here that you can count on," he said. "You couldn't ask for better neighbours. We never locked our houses for many years."

Kelly admits times have changed and the doors get locked now, but the quality of his friends and neighbours is still high. However, the mill closure has made him sad for what might be coming, and he thinks it has already hit his own wallet.

Kelly isn't just worried about his own situation, but what might happen to hundreds of others in the town.

"It's actually scary, and I think a lot people — young people, who've bought into big homes here and work at the mill — it's going to hurt them a lot," Kelly said.

Selling off a lifetime

Harley Bon is feeling the bad economic tides. He has a good job with the town and was born and raised in The Pas (and loves it), but he feels the future is too insecure.

Bon has the rewards of a life of hard work tucked into his pin-neat garage and it's clear he loves his toys. 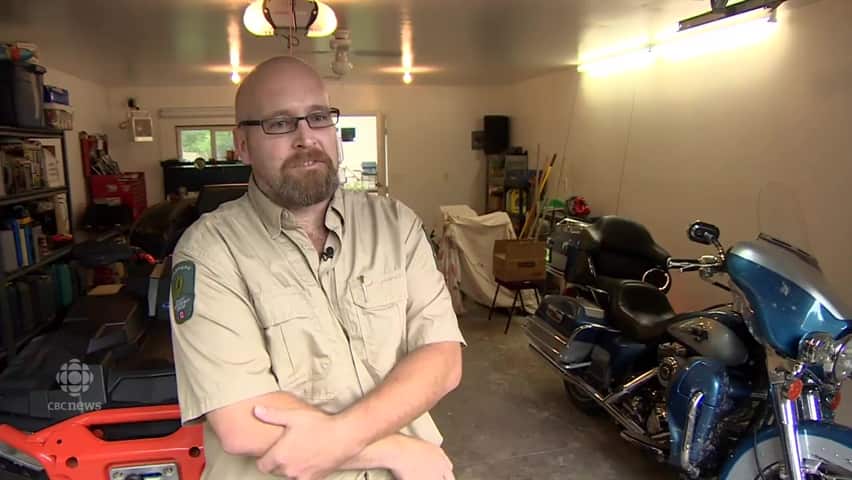 5 years ago
1:11
Harley Bon says he loves The Pas but he has trouble seeing a future for himself in the town now that Tolko Industries is closing the mill. 1:11But the Harley Davidson motorbike, his truck and maybe even his tricked-out ATV are for sale. The house is, too. They're all posted on The Pas Buy and Sell on Facebook.

"Who's to say what's going to come down the road? I don't know, but I want to be prepared and I want to be ready," Bon said. "I don't want to be stuck. That's where it's at."

Bon said it's an financial reality he has to face, better sooner than later, if things get worse.

Bon said he can rely on his town job for now, but he'll move if he has to, hopefully within Manitoba, but he'll go west if the money is right.

Tough time to be mayor

Mayor Jim Scott said he started hearing about the potential mill closure Monday morning by text message. Within a short time it had been confirmed, and he later got a "courtesy call" from the company.

Scott has been talking to the province about what kind of help the town can get.

He's keeping up a brave front, and he talks about overcoming these challenges, hoping business incentives will keep the best and brightest from leaving for the oilfields or elsewhere.

He hopes local companies will snap up some of the cream of the laid-off mill workers.

Scott will get his share of criticism from townsfolk, but he also gets some grudging respect for being on the hot seat.

The Pas has been near here before

This is a scene residents of The Pas have seen before. The mill has suffered shutdowns, weathered trade disputes with the United States and received concessions from workers and government cash.

Some locals believe this time it's for real and the Buy and Sell might be the barometer of northern communities in financial crises.

There's easy access to a glorious back country stocked with fish and game, great trails and lots of places to snowmobile. Enjoying those opportunities requires expensive toys, and mill wages can hover near six figures.

That kind of income can't be counted on anymore and now the for sale listings are starting to grow for tricked-out snow machines and deluxe fishing rigs.

Premier Brian Pallister made it clear Wednesday that a financial miracle for The Pas isn't on the table from his government.