A 17-year-old boy has been charged with a number of offences after allegedly dumping a 22-month-old girl in a recycling bin outside a Winnipeg house in the 500 block of Pritchard Avenue on New Year's Day. 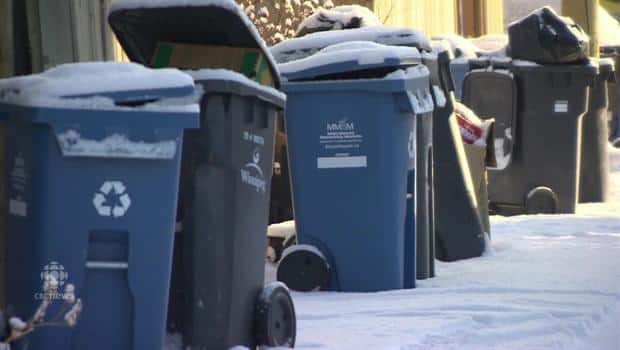 6 years agoVideo
2:03
A 17-year-old has been charged with a number of offences after allegedly dumping a 22-month-old girl in a recycling bin outside a Winnipeg house in the 500 block of Pritchard Avenue on New Year's Day. 2:03

A 17-year-old boy has been charged with a number of offences after allegedly dumping a 22-month-old girl in a recycling bin outside a Winnipeg house on New Year's Day.

"As soon as I looked down that baby looked up at me and she stopped crying. She held out her arms. There was a lot of things going through my head. And so I picked up this baby and she was just cold. I couldn't believe she was only in a diaper [and pants].

"I picked up this baby and I yelled back out there to call the cops. I just found a baby in a garbage can."

Keno said he broke down in tears when he found the child.

"My heart just dropped," said Keno. "No baby should ever go through something like that. Like that is just horrible," said Keno. "Just broke down in tears ... I couldn't handle that."

According to Winnipeg police, the suspect was socializing at a home near the 500 block of Pritchard Avenue when an altercation broke out, and another person at the party was chased away and went down the street.

The 17-year-old then took the child — who was "not adequately dressed for the weather," police said — and ran from the home.

Once outside, he fell, allegedly landing on top of the child and causing her to suffer a number of injuries before tossing her in the recycling bin.

Police believe the toddler was in the recycling bin for around 15 minutes. The temperature was around –13 C  (–24 with wind chill) at the time of the incident.

The 17-year-old is reported to have then returned to the party, where according to police, he got into a physical altercation with a 13-year-old girl.

"You have family, you have friends, you're enjoying a good time and then something like this, you know beyond comprehension certainly. I think we've all hosted parties and had children present, would never in a million years could believe something like this could ever occur," said Const. Eric Hofley, a police spokesman.

The mother of the toddler told CBC's Kiran Dhillon that she was busy dealing with a fight when her daughter went missing.

She said her brother was the one who ran off with her 22-month-old daughter. She doesn't know what could have motivated him to take her and leave her in the recycling bin, but said he had been drinking excessively at the time of the incident.

The mother said her daughter is now recovering in the care of Child and Family Services in Winnipeg and hopes to get her back soon.

She also said she was thankful to Keno for saving her daughter's life.

Keno, who said he had originally been chased out of the party, heard the toddler's cries and found her in the recycling bin.

Autumn Wozny, Keno's sister-in-law, said there is no excuse for what was done to the child.

"You might have been under the influence, but that gives you no right to do that to an innocent child," said Wozny.

Wozny said she was shocked to see the condition the child was in.

"She was cold, she was so beaten up that her little left eye couldn't open," said Wozny. "She hardly had a pulse, she was beaten up so bad."

The girl was transported to hospital with life-threatening injuries, but police report she is now in stable condition.

The 17-year-old, who cannot be named under the law, was arrested and turned over to the Child Abuse Unit.

He has been charged with a number of offences, including: