'This is love for Tina': Crowd marches for change in honour of Tina Fontaine in Winnipeg

A child's cry cut through a moment of silence as more than 1,000 people huddled in the cold at The Forks in Winnipeg to reflect on the life of Tina Fontaine, one day after a jury found the man accused of killing the Indigenous teen not guilty.

More than 1,000 people gather to support family after man found not guilty in teen's death

A child's cry cut through a moment of silence as more than 1,000 people huddled in the cold in Winnipeg to quietly reflect on the life of Tina Fontaine, one day after a jury found the man accused of killing the Indigenous teen not guilty.

The group gathered at the courts in downtown Winnipeg on Friday morning to march in honour of Fontaine, whose 72-pound body was pulled from the Red River on Aug. 17, 2014, wrapped in a duvet cover weighed down by rocks.

"My son and my husband, we did what we could to bring justice to my baby girl," Thelma Favel, Fontaine's great-aunt who spent more than a decade raising her, told the crowd through tears.

"We just want this violence to stop. Make it safer for younger children in this world. Tina I know is here beside me right now and is looking upon you guys and is appreciating everything you are doing," Favel said.

"I can't express how much gratitude I have for each and every one of you." 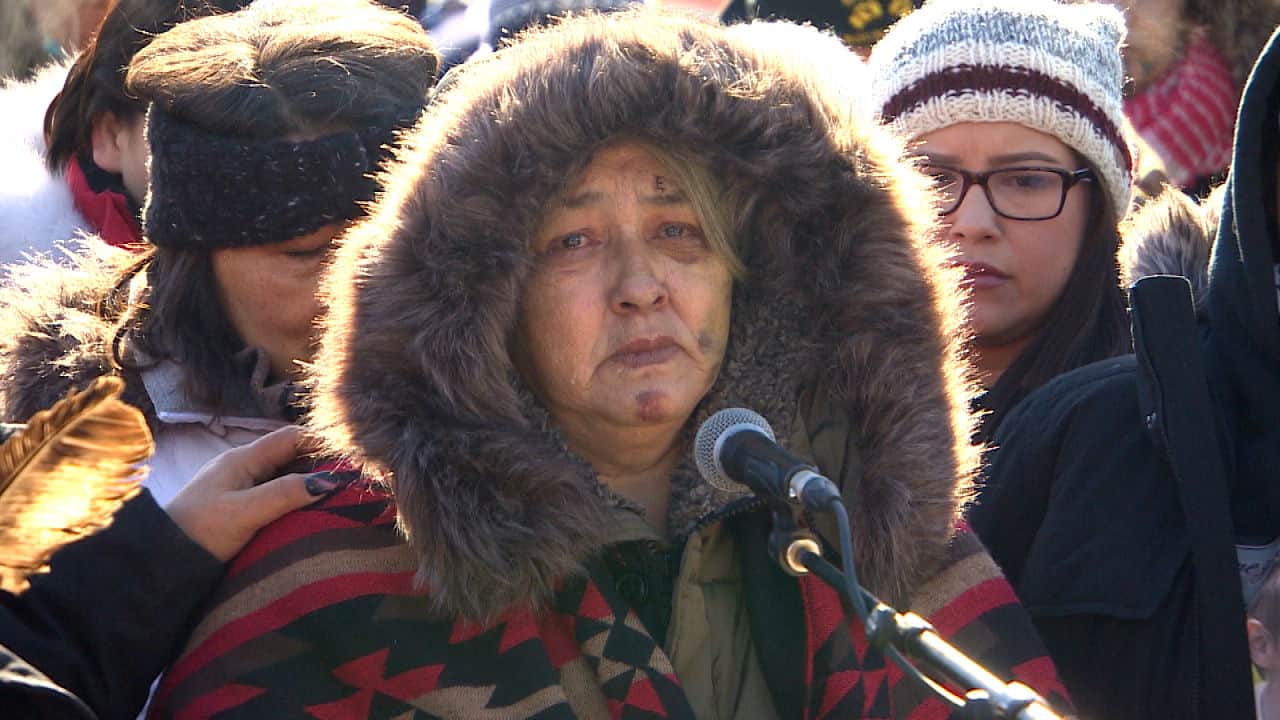 'My heart is just overflowing with love and gratitude for each and everyone of you.' : Thelma Favel

3 years agoVideo
1:40
Thelma Favel gets emotional as she thanks the hundreds of people who took part in the march to hounour Tina Fontaine. 1:40

A jury acquitted Raymond Cormier, 56, of second-degree murder on Thursday after 11 hours of deliberation.

The verdict was met with despair and anger by family and Indigenous leaders.

"Everybody right now across this country should be ashamed of themselves for the injustice that just occurred here."

That message of accountability was present in the many speeches at the march Friday, but so too were calls for unity.

In a prayer, march co-organizer Thelma Morrisseau said this was a day of "love and peace and unity for our daughter, our granddaughter, our niece, our little sister that we have lost." 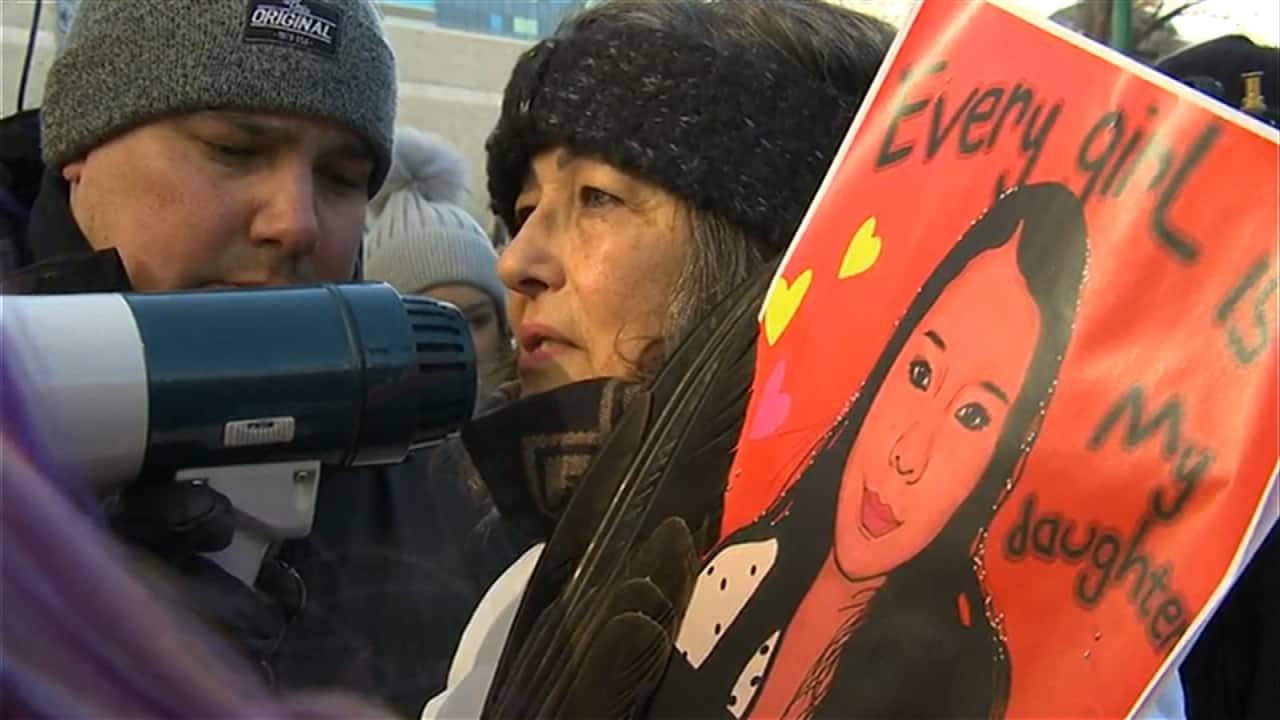 A call for peace

Sounds of drumming, traditional song and shouts of "we want justice" echoed through downtown during the nearly three-hour long event, which wound past the Canadian Museum for Human Rights and ended at Oodena Circle, the sacred site at the confluence of the Red and Assiniboine rivers at The Forks.

​"I want you all to look around you — this is love for Tina," said University of Winnipeg professor Niigaan Sinclair as the crowd at Oodena Circle cheered.

Not two weeks ago, Sinclair stood in the same spot and spoke out against injustices facing Indigenous people after Saskatchewan farmer Gerald Stanley was acquitted in the shooting death of Colton Boushie.

Sinclair said Indigenous women are disproportionately affected by violence and Canadians need to empower them.

Zoey Travese, 10, of Shoal Lake First Nation, attended the march with her mother and family.

As an Indigenous girl not much younger than Tina was, Traverse says her mother often warns her to be careful and not to "dilly dally" on her walk to and from school.

Dakota Wapash held a sign that read "No Justice, No Reconciliation" as he walked to The Forks.

He said he participated because he wanted to take a stand and "to let the people know that we're not going to put up with it anymore."

"I feel like the system has failed all of us," he said, adding it felt fulfilling to stand up for the rights of Indigenous people at the march. "Proud to be here… I just want to see changes."

Watch three views on why the march is important: 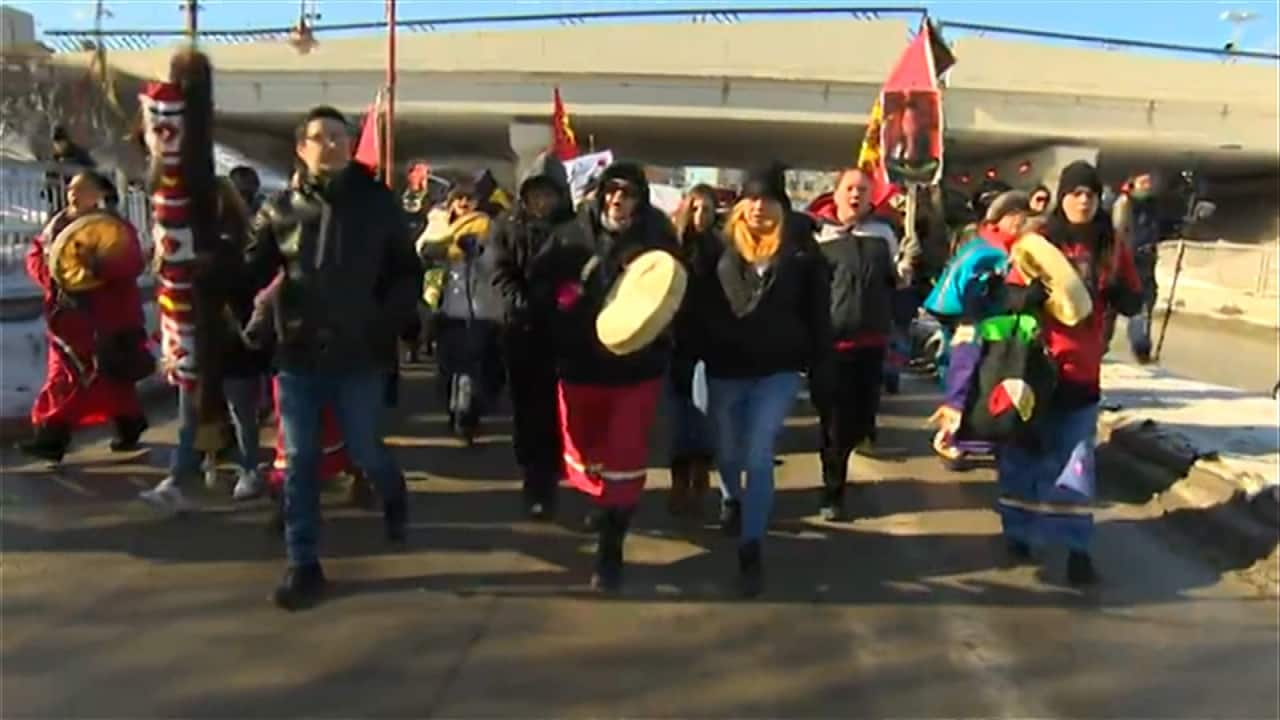 ​3 views on why the march is important

3 years agoVideo
0:58
Marchers call for better representation on the justice system and ask how this affects reconciliation. 0:58

Tina's body was found eight days after she was reported missing in August 2014. Originally from Sagkeeng First Nation, she had only been in Winnipeg for six weeks before she was found dead. During that time she came into contact with paramedics, police, security officers and staff at the Children's Hospital and Child and Family Services.

Tina, who jurors learned was sexually exploited during her time in Winnipeg, was in the care of CFS when she ran away and never returned. The department had been keeping her in a hotel in Winnipeg, a former emergency overflow housing practice the Manitoba government ended after Fontaine's death.

Travis Bighetty, born in Pukatawagan Cree Nation in northern Manitoba, says he was in court when the Cormier verdict was read Thursday.

As a social worker and a volunteer with the North End watch group Bear Clan Patrol, Bighetty says he felt in that moment he had failed Tina and that as an Indigenous man the system has failed him.

"I feel connected, and I feel I've failed as a social worker but I am not going to fail as an Indigenous man."

Leah Gazan, a social justice advocate and Indigenous studies instructor at the University of Winnipeg, said she was in Toronto when she heard the verdict and broke into tears.

"We have a justice system right now that's clearly different, depending on who you are, between Indigenous and non-Indigenous Canadians," she said.

"Our kids are not disposable. We need to take an active stance so they get a clear message that their lives matter and that people are watching and that they're loved."

Gazan believes reconciliation is a long way off "in the absence of justice."

"We need to go beyond conversations and rhetoric," she said. "There needs to be swift action, certainly, looking at the justice system and how it is stacked against Indigenous people and the systems that are supposed to protect our kids but are leaving them vulnerable."

Bighetty said what has to happen now is that Indigenous people, including those involved in the child and family system, not be treated as "wards of the state."

"It needs to change from us being in the background to us not being at the front but walking together."

"Tina's death should serve as a call to action for all of us," Pallister said in a statement. "In our sadness, we must be motivated to make a difference."

Meanwhile Sheila North, grand chief of Manitoba Keewatinowi Okimakanak, who has criticized how the inquiry into missing and murdered Indigenous women and girls has been managed, said she remains cautiously optimistic it will serve a positive purpose.

"At moments like this I think we're reminded that we are all human beings," she said. 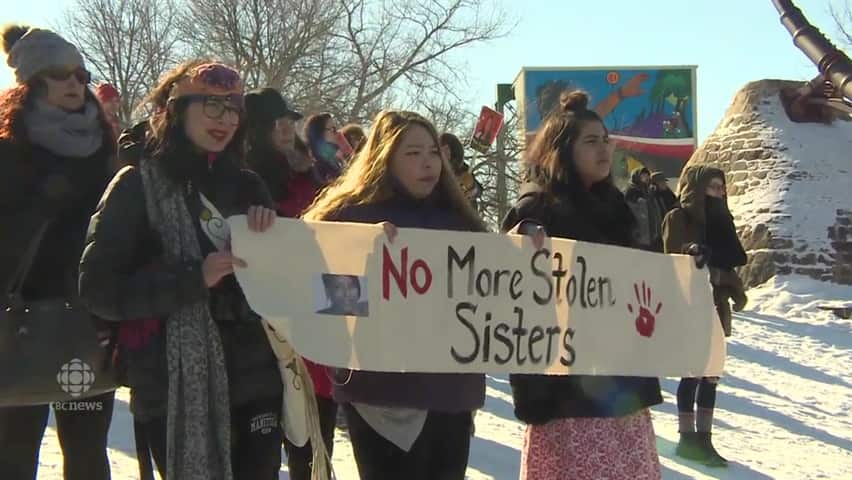 March for change in honour of Tina Fontaine

3 years agoVideo
2:03
A child's cry cut through a moment of silence as more than 1,000 people huddled in the cold in Winnipeg to quietly reflect on the life of Tina Fontaine, one day after a jury found the man accused of killing the Indigenous teen not guilty. 2:03

Live blog of the march

With files from Shane Gibson, Jillian Taylor and the Canadian Press