The mother of a one-year old with a rare chronic condition says her child has suffered from not being able to access the health care she needs in Winnipeg because of precautions and clinic closures due to COVID-19.

Hallie Thiessen, 1, has been to the ER more than a dozen times in past month because her clinics are closed

The mother of a one-year-old with a rare chronic condition says her child has suffered from not being able to access the health care she needs in Winnipeg because of precautions and clinic closures due to COVID-19.

Cari Thiessen said she's taken 19-month-old Hallie to the Children's Hospital emergency department at the Health Sciences Centre about 12 times this past month, often to be sent home to try and manage her daughter's pain, bleeding and surgical wound care.

The clinics that used to provide ongoing care and support to Hallie and her family were closed by the province because of the pandemic.

WATCH | Cari Thiessen describes the fight to get support for her chronically ill daughter during COVID-19: 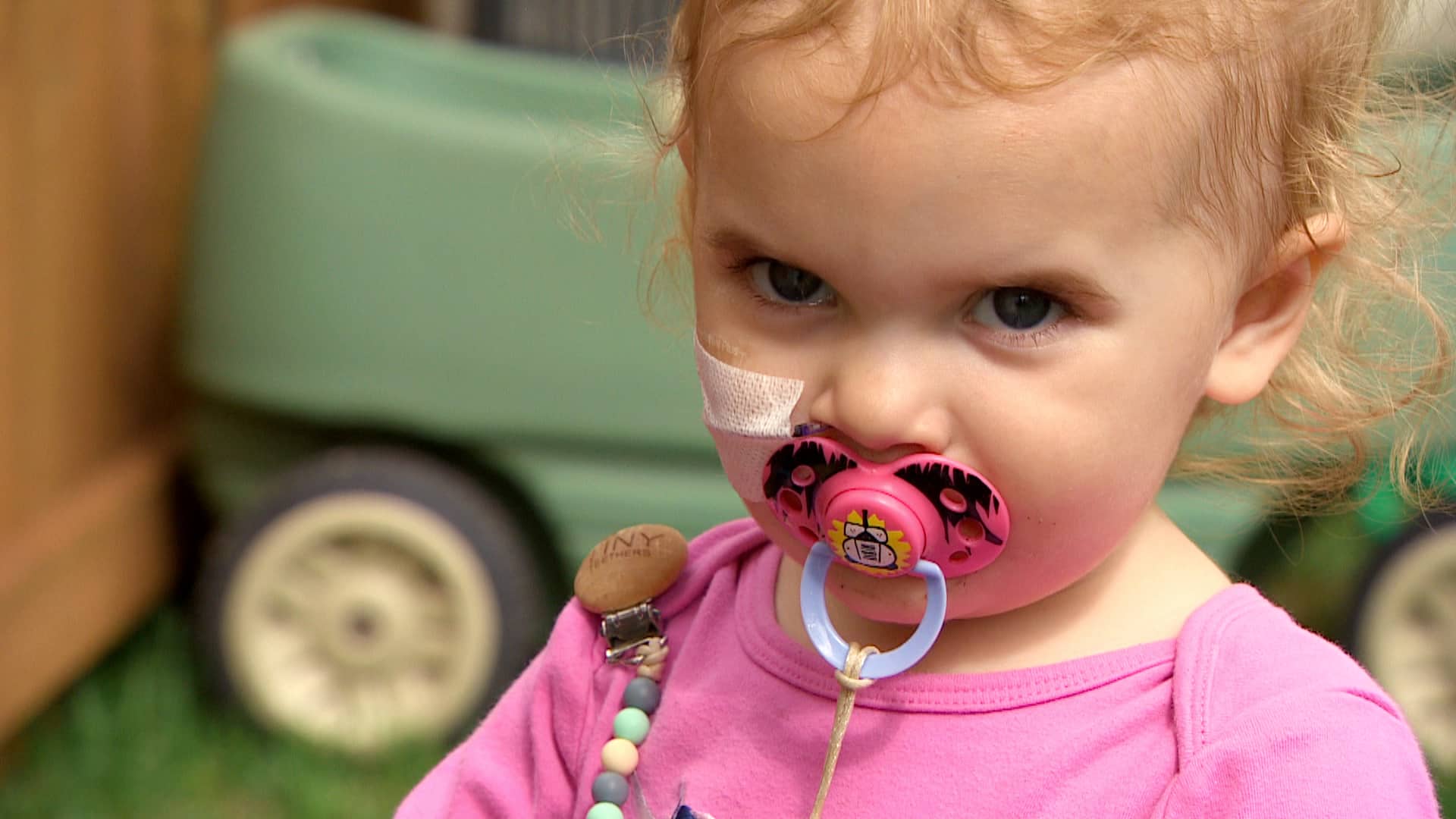 "We've got this amazing, amazing team that we work with at [HSC] children's and the government seems to have just tied their hands. And they keep making all of these public statements about how they're here for us. She hasn't even contracted COVID and yet, somehow, it has made her health so much worse."

Hallie has a rare condition called eosinophilic gastrointestinal disease, which causes constant pain and inflammation throughout her digestive tract, as well as constipation. Food makes her condition worse, so she can't eat and is on a strict formula diet.

She's had three urgent abdominal surgeries in the past month because of her disease and has suffered unexpected complications.

Her ileostomy, which lets bodily waste pass into a bag from the intestines through a surgically-created opening called a stoma on her abdomen, was performed in late April to alleviate some of her bowel problems. Days after the operation and hours after discharge home, the site wouldn't stop bleeding.

"It was like Groundhog Day where we just kept doing the same thing over and over, going to the ER and her bag would be filled with blood continuously. Like there was never a time where it would stop," said Thiessen.

The bleeding baffled hospital staff too, she said, and though some visits prompted tests and interventions, she was usually sent home to monitor her daughter.

"Whereas in the past, we've been admitted for things far less severe than active bleeding from a new surgical site," she said, adding she and her husband Jonathan felt completely helpless to handle their daughter's complications at home.

Hallie was finally recently admitted to the HSC children's ward where she can be seen by her medical teams. Still, Thiessen said it's been incredibly frustrating to watch as the province reopens the economy, because clinics still aren't on that list, and Hallie will need them when she's home.

"Hair salons are opening, people are starting to be able to go clothes shopping, parks are opening … and yet, I still don't have access to her doctors."

'Things just continued to go down'

The pandemic precautions, which included closures of clinics and postponement of non-emergent procedures due to COVID-19, had unfortunate timing for Hallie.

She was scheduled for an urgent scope to investigate what was going on with her GI tract on March 20, but two days before, it was cancelled.

"That scope was so instrumental as far as what we were going to do with treatment … and figuring out if something else was going on," said Thiessen.

"Her poor doctor felt so bad, she called and she was just apologizing over and over. Things just continued to go down and down from there."

Hallie cried often, couldn't sleep, and was constipated over the following weeks.

"Prior to COVID, we had pretty easy access to our GI clinic and a hotline you can call and you can talk to your GI nurses," said Thiessen, adding they'd also put her through to the doctors if necessary. Eventually, doctors scheduled Hallie for an urgent scope and ileostomy, which was done on April 20.

Weeks of bleeding and trips to the ER followed. Each time, the family would be sent home to monitor her blood loss, care for her swollen and inflamed ostomy site and even apply packing to her wound.

"Which was incredibly difficult. It would take two of us to pin her down and then plus I had a nurse friend come and she was doing the packing and Hallie would just scream and scream and scream because clearly it was very painful for her," said Thiessen.

Everything reached a head one night in early May.

"She was literally just lying in a pool of blood. Her jammies, her bedding, everything was soaked in blood. Her ostomy bag had filled with blood and burst and so blood was just running everywhere. Most terrifying moment of my life and I'm still dealing with flashbacks," said Thiessen.

Hallie went for an emergency cauterization of the wound. The bleeding didn't stop and the site didn't heal, so Hallie went in for a new ileostomy on a different part of her body on May 20.

"The lack of access has definitely been the biggest issue for us for sure. Because either way she might've needed this ileostomy but now we haven't had the support that we should've had given that everything is just, like, closed."

At a press conference Wednesday, Chief Nursing Officer Lanette Siragusa said clinical leaders are working together to determine when the ambulatory and community clinics will reopen.

"I expect we'll be hearing information on that very soon," she said.

"I know they're quite anxious to be able to open up and make sure that people have the ability to access the services, and it might also be virtual services, if that's reasonable given the situation."

The order of what's opening makes no sense to Thiessen.

"I can get my nails done and I can get a tattoo but I still can't see my ostomy nurse in person."

A spokesperson for Shared Health Services wrote that privacy laws prevent them from speaking about individual cases, but "we recognize the concern and sense of urgency families feel when they have a loved one in need of care."

"Despite COVID-19 presenting many operational challenges for the health system, we have continued to make every effort to ensure the continuity of care for our patients while ensuring all steps are taken to protect patients and staff from this virus," wrote the spokesperson, in a statement.

"We encourage patients and families to reach out to our patient relations team if they have any concerns with their care or the care of a loved one. They can be reached at 204.787.2704 or online at pro@hsc.mb.ca."

'Their lives matter just as much'

Cari Thiessen understands the precautions are in place so people don't get sick, but disagrees with that happening at the cost of those who already are sick.

"The kids like my daughter Hallie, their lives matter just as much as the lives of the people who are healthy and we're trying to protect," she said.

She said she's seen her daughter's caregivers cry in frustration for not being able to do more due to the precautions, and other families like hers return to the ER again and again for non-emergent issues.

"It just does not make sense to me that we are trying to protect a population from getting sick by taking away health care from the chronically ill," she said. "If the government had done things differently, this would've gone a whole lot smoother."

Living with chronic illness during COVID-19

9 months ago
2:56
The mother of a one-year-old with a rare chronic condition says her child has suffered from not being able to access the health care she needs in Winnipeg because of precautions and clinic closures due to COVID-19. 2:56
CBC's Journalistic Standards and Practices|About CBC News