It's not a wonderful play, but it'll still fill you with a least a little holiday cheer

It's a Wonderful Life: The Radio Play runs at the Royal Manitoba Theatre Centre's John Hirsch Mainstage until Dec. 15.

Novelty of Royal MTC's radio play take on It’s a Wonderful Life wears thin, but it's still a wonderful story

The films of the American director Frank Capra were sometimes dismissed as "Capra-corn" by his critics, for their unabashed sentimentality.

Oddly, though, the greatest failing in the stage version of his best-known movie, now running at the Royal Manitoba Theatre Centre, is that if anything, it could be more corny.

Philip Grecian's stage adaptation of It's a Wonderful Life (which MTC produced in 2009 — recent memory, as professional theatres go) keeps the storyline of Capra's 1946 movie, a holiday classic that more than one poll has crowned the greatest Christmas movie of all time.

But there's a twist — rather than just presenting the story straight, Grecian turns it into a radio play within a play.

So we become the live studio audience at CMTC, a radio station presenting a dramatized version of the classic movie in 1947 — complete with little commercial spots for local businesses (Sals has never sounded so good), live music (gracefully performed by pianist Danny Carroll) and sound effects.

Actor Fletcher Tweed (played here by Wade Bogert-O'Brien) takes on the role of our hero, George Bailey, in the radio play we see performed onstage.

As in the film familiar to so many, George is a dreamer stuck in tiny Bedford Falls — but also a community builder beloved by his neighbours.

When George falls on hard times and begins to wish he'd never been born, his guardian angel, Clarence (performed here by local fave Robb Paterson, who directed the 2009 MTC production) appears to show him what a George Bailey-less Bedford Falls would look like, setting up one of the most jubilant endings in cinematic history.

The fact it is such a familiar story makes the concept of the staged radio play admirable, even inspired — though it's one that works with mixed, and diminishing, results. 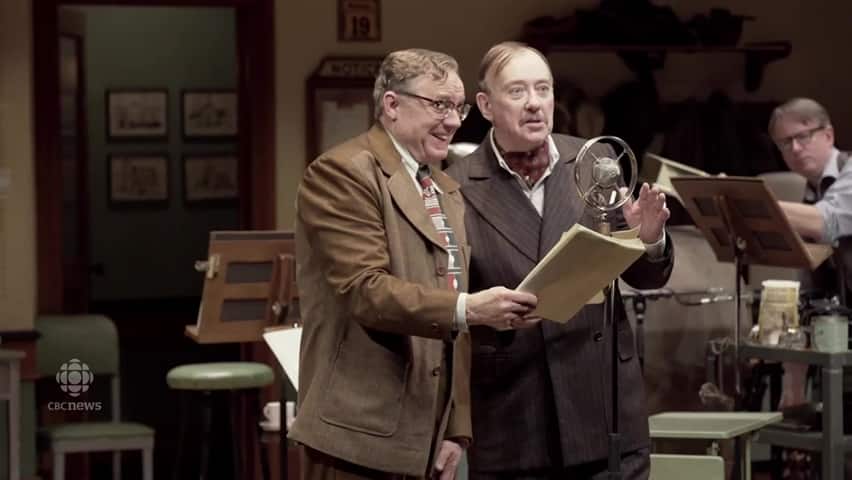 Royal MTC's It's a Wonderful Life

On the plus side, there's tremendous fun in seeing some of the trappings of the golden age of radio, most notably the live sound effects. They're provided by Toronto musician and sound designer John Gzowski (if the family name sounds familiar, yes, his dad used to work for CBC), who dazzles in the role of the radio play's Foley artist/sound man.

He employs old-school theatrical wizardry, turning stalks of celery into the sound of cracking ice, a metal sheet into rumbling thunder, or a sewing machine into a rumbling old jalopy. The script apparently calls for four Foley artists — Gzowski, doing the work on his own, is almost balletic as he dashes from one weirdly ingenious sound contraption to the next.

Steven Schipper's efficient production has a marvellously authentic look to it too, thanks to Michael Gianfrancesco's impeccable period costumes and his handsomely lived-in radio-studio set.

The production has a top-notch cast of 12, which includes an impressive list of local actors showing off their vocal talents in a range of roles — Eric Blais, Toby Hughes, Kevin Klassen, Jennifer Lyon, Tracy Penner, Ray Strachan and Jon Ted Wynne, in addition to Paterson.

They back up a charming Amanda Lisman as George's wife, Mary, and Bogert-O'Brien, who plays a charismatic George Bailey.

And here's where It's a Wonderful Life: The Radio Play fell apart for me in 2009, and did again this time.

Capra's movie is shamelessly sentimental, but it's a wonderful story. Here, though, the conceit of the radio play, and the effect of watching actors stepping in and out of character, highlights an essential artificiality to this adaptation that robs the story of some of its heartwarming sentiment.

On top of that, the novelty of the radio play stretches thin long before the end of its 2½-hour (with intermission) running time.

But there's a reason people watch It's a Wonderful Life every year, and why it's back again at RMTC — it's a holiday classic. So perhaps ultimately, the question is — will it fill you with holiday cheer?

To a point, yes — it's near impossible not to feel a little lump in your throat by the time we get to that famous line, "No man is a failure who has friends."

Wringing a bit of holiday cheer out of an adaptation of the greatest Christmas movie ever is a pretty modest ambition, but this one achieves it.

Wonderful? No, not really. But it'll win enough friends that it's not a failure, either.

It's a Wonderful Life: The Radio Play runs at the Royal Manitoba Theatre Centre's John Hirsch Mainstage until Dec. 15.

Joff Schmidt is a copy editor for CBC Manitoba. Since 2005, he's also been CBC Manitoba's theatre critic on radio and online. He majored in theatre at the U of M, and performed in many university and Fringe festival productions along the way (ranging from terrible to pretty good, according to the reviews). Find him on Twitter @JoffSchmidt.