Empire of the Son shines with a meditative, graceful exploration of father-son relationship

When it comes to our relationships with our parents, many of us probably check off the "it’s complicated" box. Certainly Tetsuro Shigematsu would in describing his relationship with his late father — a relationship his acclaimed solo show Empire of the Son unpacks with style and substance.

When it comes to our relationships with our parents, I suspect many of us check off the "it's complicated" box.

Certainly Tetsuro Shigematsu would in describing his relationship with his late father, Akira — a relationship his acclaimed 2015 solo show Empire of the Son aims to unpack.

Making its Winnipeg debut as the first show in Prairie Theatre Exchange's new Leap Series — focused on smaller, intimate and more experimental work — Empire is a meditative and thoughtful look at the often fraught parent-child relationship.

Akira Shigematsu was a public broadcaster — working first for the BBC, and later for the CBC's shortwave radio service.

Ironically for a man whose career involved talking to strangers across the world, he comes across here as stiff, formal and taciturn outside the radio studio — including with Tetsuro, who maintains he never had a proper conversation with his father until he began conducting interviews with him near the end of Akira's life.

That seems a natural fit for Tetsuro, who would follow his father into public broadcasting — CBC Radio One listeners will likely remember him as the host of the national afternoon show The Roundup.

Here, he draws on those interviews he conducted with his dad — sometimes even playing clips from them — to give us the highlights of his father's life.

It's one highlighted by remarkable moments — Akira had tea with the Queen, was in the room with Marilyn Monroe serenaded JFK, and was in Hiroshima when the atomic bomb was dropped.

Also remarkable — though more quietly so — are his attempts to be a good father to Tetsuro, misguided as they may sometimes be (including an attempt to send a young Tetsuro on a character-building mission to one of three cities of his choosing — Kolkata, the Bronx in New York City, or Winnipeg).

As he presents us with fragments from Akira's life, it seems we join Tetsuro on a shared mission — gradually piecing together who Akira Shigematsu was as a man.

It's a story told here with stylish flair, too. Shigematsu is a talented writer, and the monologue has an often poetic quality. 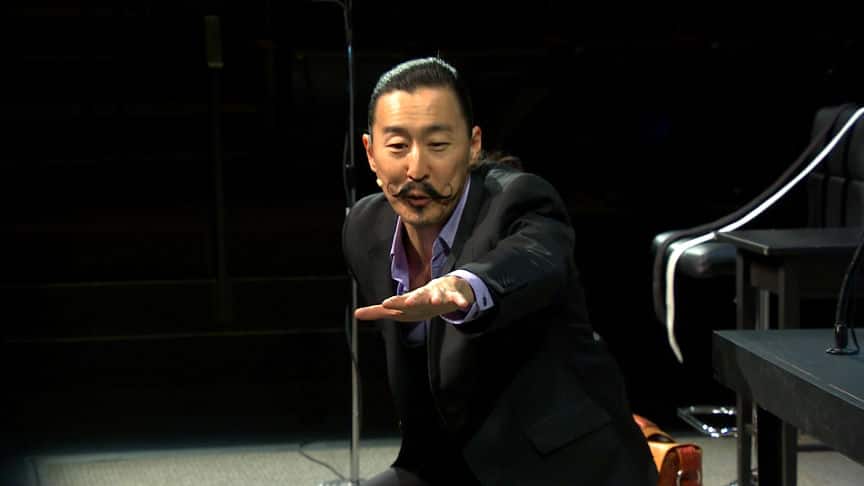 2 years agoVideo
4:21
CBC's Marjorie Dowhos spoke to the star of Empire of the Son and former CBC radio broadcaster, Tetsuro Shigematsu ahead of the show's debut in Winnipeg. The play is part of Prairie Theatre Exchange's new Leap Series. 4:21

He also employs a unique blend of puppetry and video storytelling — using a camera onstage to film close-up images of miniatures which are then projected, taking us to the bombing of Hiroshima, for example, or into Shigematsu's childhood home. The cinematic images created are often strikingly beautiful.

As a storyteller, Shigematsu has an unvarnished and amiable style, and he offers plenty of laughs here to lighten what could quickly become a sombre piece.

It's not explosive theatre, and the theme of exploring the child-parent relationship, while certainly relatable, is familiar territory.

But Shigematsu covers it with unflinching honesty, grace and an effective and affecting blend of style and substance.

Empire of the Son runs at Prairie Theatre Exchange until Dec. 9.

Joff Schmidt is a copy editor for CBC Manitoba. Since 2005, he's also been CBC Manitoba's theatre critic on radio and online. He majored in theatre at the U of M, and performed in many university and Fringe festival productions along the way (ranging from terrible to pretty good, according to the reviews). Find him on Twitter @JoffSchmidt.