​RCMP have made an arrest in the killing of 11-year-old Teresa Robinson. The condition of her body initially led investigators to believe she had been killed by a wild animal, but investigators later determined it was a homicide. 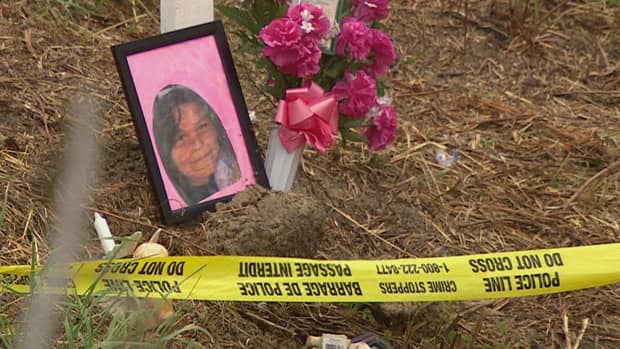 Arrest made in killing of 11-year-old First Nation girl

RCMP have made an arrest in the killing of 11-year-old Teresa Robinson.

Robinson's body was found on Garden Hill First Nation, Man., in May 2015.

The condition of her body initially led investigators to believe she had been killed by a wild animal, but investigators later determined it was a homicide.

RCMP announced on Thursday they arrested a male in Garden Hill in connection with the case, but they did not provide further details.

"While we understand that this arrest will generate a lot of questions, we are not in a position to provide further information at this time as there are a number of investigative steps currently being undertaken," Sgt. Bert Paquet said in a news release.

RCMP said further information about the arrest would be provided on Friday.

Robinson was last seen alive leaving a birthday party in the community around 9 p.m. on May 5. A search started on May 7, but RCMP weren't notified until May 8.

After her partial remains were discovered, a search was launched to recover the rest. Crews spent weeks combing the woods and dragging the river in the community.

Classes were cancelled so the school could be used as a base for more than 700 volunteers who signed up to search.

In February, RCMP launched a massive collection of DNA from men in the remote northern Manitoba community.

They requested voluntary DNA samples from men between the ages of 15 and 66 and hoped to collect 2,000 samples. RCMP never revealed how many samples were actually collected.

"Your loss is tremendous and our hearts and prayers are with you at this time. While the circumstances are very difficult, I hope that this new information may help bring some closure for the family and the community," said MKO Grand Chief Sheila North Wilson.