People who have been living in tents on the lawn of a West Broadway church don’t know where they will go after they were asked to leave the site by Wednesday afternoon.

People who have been living in tents on the lawn of a West Broadway church say they don't know where they will go after being asked to leave the site by Wednesday afternoon.

"That's the big question. Wherever it is convenient and safe,' said Terry Johnsen, who has been staying on the grounds of All Saints' Anglican Church on Colony Street and Broadway for about a month, when the first tents moved in.

The tent city started with a few tents popping up overnight. Then campers began leaving the tents on the church grounds during the day.

Then more tents showed up.

At one point, there were close to 40 people camped out on the site, and garbage began piling up. The church had to rent an outhouse. Community groups and volunteers brought in food and water and cleaned up discarded needles.

The parish struggled with how to deal with the situation, not wanting to turn away those in need, but recognizing the situation could not become permanent.

A wedding this week prompted the church to ask the campers to leave, and stay away until after the ceremony. The church's board decided Tuesday they wouldn't allow them to return, at least not for more than the night.

As of late afternoon Wednesday, just one tent remained standing on the church's grounds.

"People are upset, and I feel bad about that. I can't offer them more than what we've been able to offer them," said Brent Neumann, rector of All Saints' Church.

"We can't stop them from coming and setting up a tent, we can't do that. We don't have the capacity to police it or do anything with it … but we can ask them to move along," said Neumann.

People sad to leave, but not surprised

Many people in the camp said they avoid staying in shelters, because of concerns about safety, crowding and the prevalence of bedbugs. Some said they didn't like having to abide by the strict rules at shelters.

Johnsen said his sister was planning to come with a truck to help him move his belongings, and the rest would be up to fate.

"Wherever you go, get dropped off, that's where you sleep. And if it's good, you don't get woke up about 10 times the first night, you got a place for a while," he said.

He says he will probably come back to the church lawn at some point, though it would just be for a night, if needed.

"I got a small little tent. I don't need nothing permanent because it gets stolen or taken every day anyways," he said.

Others in the camp said they were sad to go, but knew their time there would come to an end.

"I appreciate the church letting us stay. I'm not upset," said Kathy Moose.

"I feel sad too because the people, we were getting along."

Johnsen said the main reason people stayed at the church so long is because it was safe, mostly.

"In daylight hours, everything is safe, nighttime is a different story," he said.

Johnsen said he's worried about the youth from the camp and where they might end up.

'We just chose not to see them'

Travis Bighetty, co-ordinator for the West Broadway Bear Clan, says the volunteer patrol group has been keeping an eye on the people living in the tent city and has been checking in with them twice a week.

He said people living on the church grounds have been in the neighbourhood for years and will find other areas to set up, like they've done in the past.

"There's nothing new about the situation with tent city, it's just now it's out in the open where everyone can see," said Bighetty.

He said the homeless are very good at hiding in plain sight, taking up shelter where they can, for as long as they can.

"We just chose not to see them."

"They are going to be separate now, that sense of safety and security that they had from watching out for one another is going to go away," he said.

Bighetty said many of the church's campers will now set up near the Assiniboine River, where they can be sheltered from view by the trees, or they will move to other areas of the city.

He says having the camp pop up just steps away from the Manitoba Legislature grounds near a busy street corner has, at the very least, brought attention to the issue.

"Tent city has shown that there's a homeless epidemic in Winnipeg, also a meth epidemic. It's not going to go away on its own," he said. 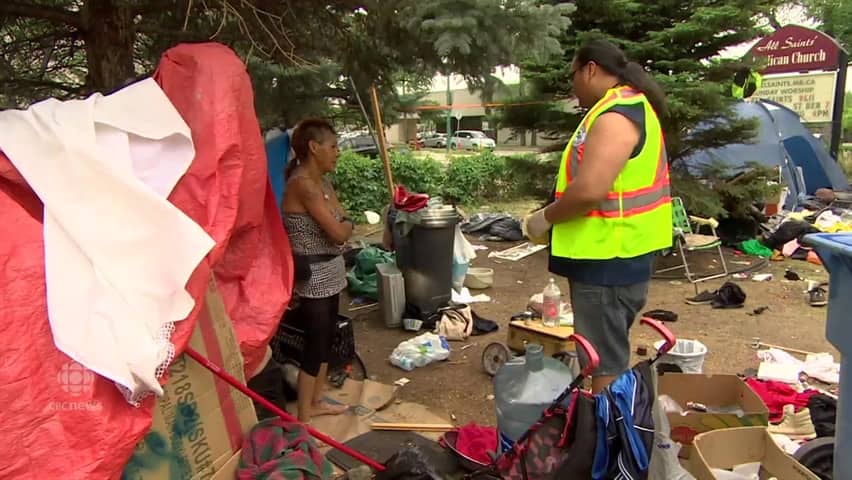