Hundreds of Manitoba teachers and supporters gathered at the legislature Friday, rallying for changes to funding for the province’s schools.

Hundreds of Manitoba teachers and supporters gathered at the legislature Friday, rallying for changes to funding for the province's schools.

"If you really want to invest in Manitoba and in our future, invest in education," said Michelle Jean-Paul, principal at James Nisbet Community School in Winnipeg.

The Manitoba Teachers' Society, which organized the rally, is calling for increased, stable funding for education. Throughout the event, participants chanted loudly, "kids not cuts."

In a Friday release, the society said the province's 0.5 per cent boost in the budget this year was effectively a cut, because it's below the rate of inflation. It's the second year in a row education funding increases have failed to keep up with inflation.

"Through their actions, this government is speaking very, very loudly that education is not a priority," said society president Norm Gould.

On Thursday, Education Minister Ian Wishart said Manitoba spends the second-most in the country per-student on students in the kindergarten to Grade 12 system.

"We are part of a process that is funding students very well in Manitoba and we are looking as a government to be in a sustainable, long-term situation," he said.

He also pointed to a literacy and numeracy program he said is hoped to be rolled out "very shortly."

Jean-Paul said she's seen students' needs become more diverse and complex at her school, with more demand for programs teaching English and more need for schools to serve as a community hub for local families.

"The world is getting bigger in a lot of ways, and so for families to find a place to connect, the school is that place that most have in common," she said.

At her school, she said she sees strain on the system in terms of staffing. Her school division, Seven Oaks, has been creative in finding "ways to do more with less," she said, but she's concerned that could overload teachers.

"To ensure that our students aren't suffering from the cuts that are being made, the reductions or the lack of increases, teachers are taking on more and more," she said.

"Inevitably that's going to lead to teacher burnout, which, again, has a negative impact on our system and is going to end up costing taxpayers more as teachers are going to take stress leaves, medical leaves, et cetera."

The Winnipeg rally will be followed by another rally in Thompson scheduled for June 9. 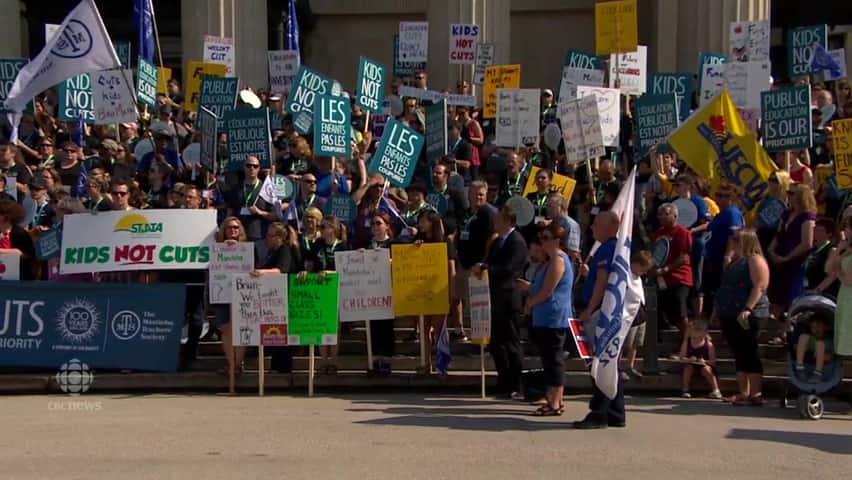 3 years agoVideo
3:22
Hundreds of Manitoba teachers and supporters gathered at the legislature Friday, rallying for changes to funding for the province's schools. 3:22

With files from Marjorie Dowhos and Cameron MacLean