'How Canadian is that?' Syrian refugee learns to play sledge hockey

A Syrian refugee who lost his leg before coming to Canada last fall with his family has developed a passion for a Canadian sport.

A Syrian refugee who lost his leg before coming to Canada last fall with his family has developed a passion for a Canadian sport.

Omar Al Ziab, 15, was walking home from school in 2011 when a military vehicle ran him over, crushing his right leg and leaving his other leg badly injured.

"They told me, 'You can play, just try,' and I tried. When I played [sledge hockey] the first time it was so awesome and it's fun," said Al Ziab.

"My friends tell me, 'Oh you are now a Canadian,'" said Al Ziab.

The teen was introduced to the sport by his sponsors when they put him in contact with Bill Muloin at the Society for Manitobans with Disabilities (SMD). They took Al Ziab to watch a practice and he was immediately interested in trying it out.

Muloin, who runs the camp, was thrilled.

"How Canadian is that? We are an adapted game of ice hockey no doubt about it, but it's still a Canadian game. For us to give him that flavour, just shortly after getting here, I like to think of that as a feather in our cap," Muloin said.

After getting him fitted for a sledge, they got him enrolled in SMD's sledge hockey camp. A group of 29 participants, ranging in age from 6 to 21, came together for the first time last week to learn and play the sport.

"Canada is the best," he said. "I feel happy. It's really nice. And I don't feel cold because on the sledge you don't stop.

Muloin said despite it being Al Ziab's first time on a hockey rink, he picked up the sport right away.

Muloin said that while many of the camp participants have varying physical disabilities, Al Ziab came to camp without any experience with hockey at all and speaks very little English. Yet that hasn't slowed him down.

Al Ziab says he made new friends, and learned more than just a new skill at the camp. 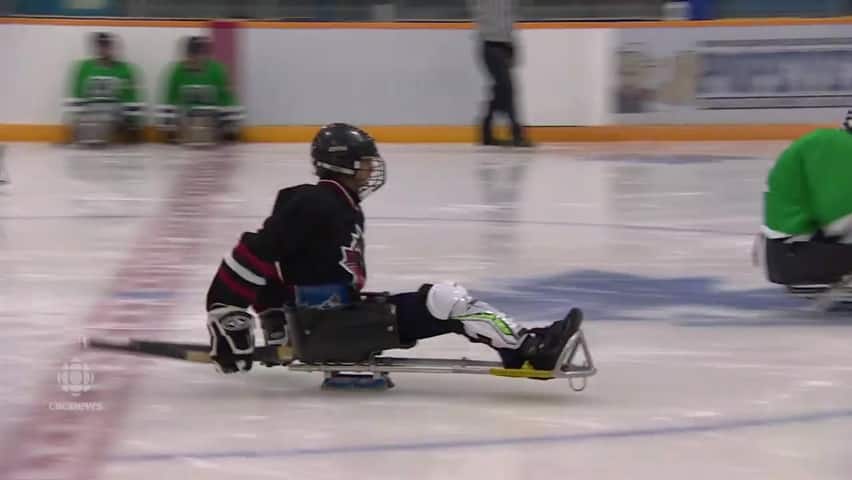 'How Canadian is that?' Syrian refugee learns to play sledge hockey

4 years agoVideo
1:49
A Syrian refugee who lost his leg before coming to Canada last fall with his family has developed a passion for a Canadian sport. 1:49

"I learned lots. I learned about hockey. And with my group I learned English more, because when you talk with more people speaking English, you learn more," he said.

Kamal Al Ziab, the teen's father, came to the final day of the sledge hockey camp with his wife and other children to watch his son play.

"It's a beautiful game, and Omar is interested in it. I hope one day he may become a professional in it. I hope he and all the other children in [the camp] will reach their full potential," he said in Arabic through translator Laila Chebib.

"[Canada] is his country [now]. And hopefully he will live here and make us proud," he said.

Omar is now enrolled to play in the SMD's winter league at the MTS Iceplex starting in September.

The Al Ziab family was joined at the camp by their sponsors from Refuge Winnipeg. The Syrian family has a network of people helping them adjust to their new lives in Winnipeg. They also brought along another young Syrian refugee, who is just beginning his life in Canada.

Ibrahim Sarhan, 13, arrived here a month ago. Like Omar, he sustained severe injuries to his leg after an artillery shell hit his home in 2013. Doctors here are working with him to see what can be done to repair some of the damage. Sarhan lost his mother and siblings in the bombing, and is now in Winnipeg with his father.

Sarhan was brought to the sledge hockey game in hopes that Al Ziab could help him adjust to life in Canada and to show him that in spite of his injuries, there are still sports he can enjoy.

"I'm very happy with [Omar] because he's from Syria, and I'm from Syria," said Sarhan.

Sarhan says he may even follow in Al Ziab's footsteps and take up sledge hockey one day. Friday was Sarhan's first time ever seeing a hockey rink in person.

"It feels very good because I've seen a new thing," he said.