CBC tagged along as six-year-old Naz Ali, a Syrian who recently settled with her family in Winnipeg, got ready for her first day of Grade 1.

Shler Ali tucks chicken breast into pita bread with sliced cucumbers into her daughter's lunch for her first day of school.

"I'm so excited for sure, but also a little bit nervous," Shler Ali admits as she puts her daughter's lunch into the Frozen-themed backpack.

Wednesday marks the first day of Grade 1 for her six-year-old, Naz Ali. But Naz is unlike many students heading back to school.

Naz was only 18 months old when her mother and father, Karwan Kahil, fled to Iraq from Syria in 2012. They spent four years in Iraq before settling in Winnipeg on June 6.

The six-year-old attended a British school in Iraq for several terms but this will be her first full year of school in Canada.

CBC tagged along with Naz's family as the little girl got ready for her first day at Princess Margaret School in East Kildonan.

Despite their extraordinary journey, the family's back-to-school worries are the same as most Winnipeggers.

"I worry about her. Will she be ok? Will she have her lunch?" Shler says.

In Syria, Shler worked as a technical and communications engineer at Damascus University, while Kahil was a geologist working for the oil and gas industry. Both are Kurdish, an ethnic minority in Syria.

"We came here, believe me, for Naz," Kahil says. "Canada, I think, is the future for her."

Shler adds that Naz is "everything in our life."

"She is our strength, she is the reason we took our journey, we wanted her to be safe," says Shler.

When the family fled the bombings in Syria for Iraq, they placed Naz in an English daycare and eventually a British-run school where she wore a stiff grey-and-red uniform and had formal mid-term and end-of-term exams.

"She was just five years old and we had to study, we had to do a lot for the exam," says Shler. "Here, I think they teach them by playing, they don't have that stress on kids which is right." 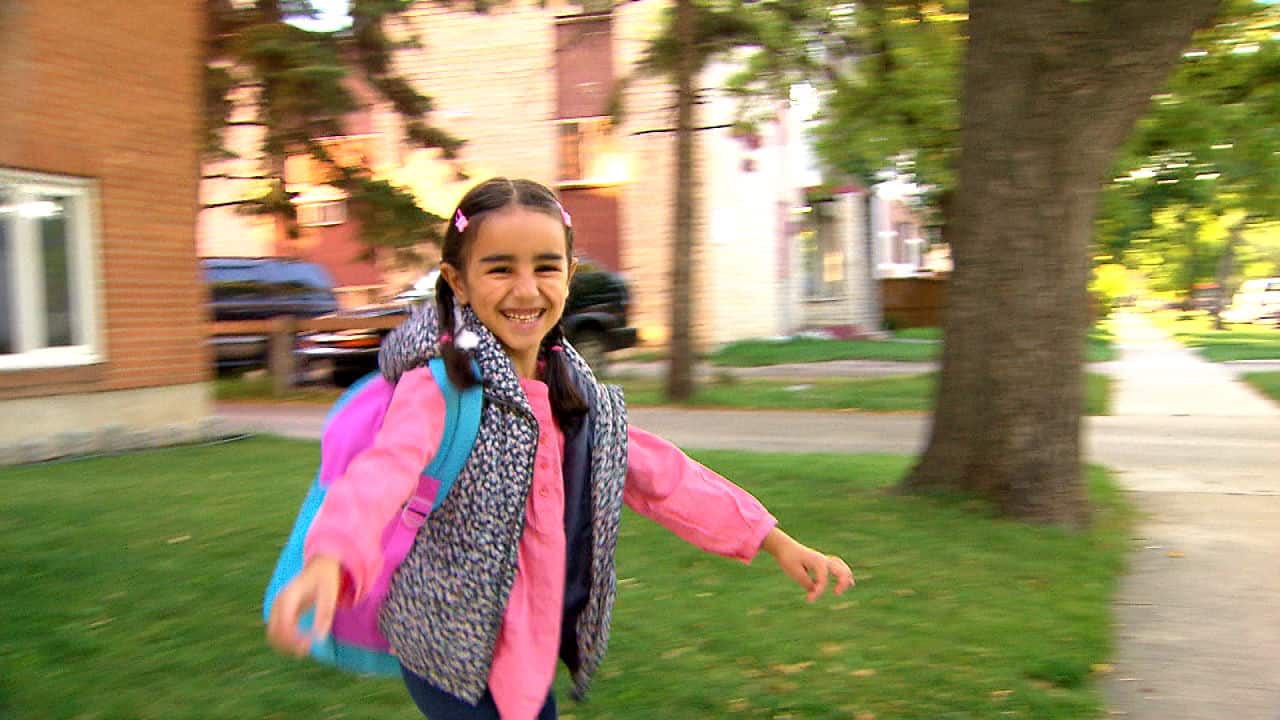 4 years agoVideo
1:17
Excitement and nerves for Syrian family heading back to school. 1:17

As Naz gets ready for school, she shows off the pink cotton blouse and leggings she picked out as her first-day outfit. "I liked my uniform, but this is better," she says.

Thanks to the English school and daycare in Iraq, Naz is already fluent in English. She speaks Kurdish in the home and also knows a bit of Arabic.

Shler, who is also fluent in English, has been working as a translator to help other newcomers settle in while they look for more formal work. The family was privately sponsored by Winnipeg's Douglas Mennonite Church.

As the time comes to leave for school, Naz eagerly puts on her back pack and walks out of the family's apartment in East Kildonan. She tugs at her parents' hands as they walk to school.

In the crowded playground, Naz quickly finds the spot where she is supposed to stand and wait to meet her teacher.

When the buzzer rings, Naz skips through the door, waving back at her parents.

Her daughter is happy, says Shler, to see her friends and also make new ones — including a boy who is also from Syria.