A suspicious package that shut down some downtown Winnipeg streets and caused the evacuation of a hotel has been secured by police. 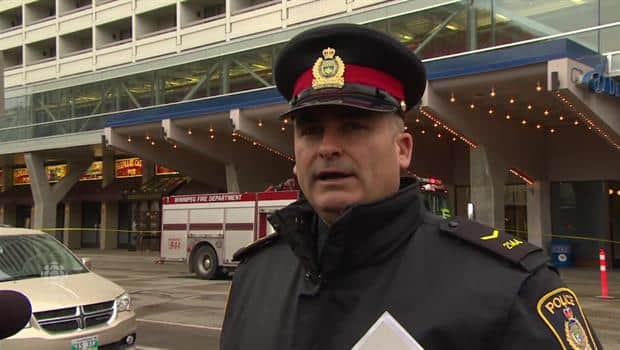 6 years ago
1:58
A suspicious package that shut down some downtown Winnipeg streets and caused the evacuation of a hotel has been secured by police. 1:58

A suspicious package that shut down some downtown Winnipeg streets and caused the evacuation of a hotel has been secured by police.

Streets in the area, which have been blocked since about 8 a.m. Tuesday, reopened at about 1 p.m. And guests of the Delta Winnipeg Hotel are now allowed to return to their rooms.

A package, possibly wrapped in tape with wires sticking out, was spotted by a hotel employee in a parkade attached to the hotel, on St. Mary Avenue.

The hotel worker thought it was suspicious and immediately called police.

All streets within a couple of blocks were taped off as police swept into the area and called in the bomb unit.

Before officers could say for certain it did not contain explosives, the police bomb squad first had to dismantle it by blowing up two water bombs nearby.

“If we're dealing with any type of electronic or potential explosive device, the detonation of this water bomb would likely detonate that particular item,” said Const. Jason Michalyshen.

The package was discovered around 7:30 in the morning and the Delta Hotel immediately evacuated its 400 guests and employees, who were told to go next door to the Winnipeg Convention Centre.

Lucio Ferrara was sound asleep in his room when the alarm sounded and a message came over the loud speakers.

“It just said everyone evacuate the building, go to the Convention Centre and the message just repeated,” said Ferrara.

Colleen Dell left her room in such a hurry she didn't even change out of her pajamas. But she and her dog Annabelle seem to be taking it all in stride.

“She's a therapy dog with St. Johns Ambulance, so when she came into the room and saw all the people she was like, ‘This is awesome,’” said Dell, who is visiting from Saskatchewan.

“She thinks she’s there to work. We left the bandana upstairs but she still got to meet lots of people so she was happy about that.”

The area was shutdown for about six hours, but even after people were allowed back into the hotel, parts of the parking garage remained closed.

There is no word yet on the nature of the package but police said the "suspicious item seized will be further examined."

Police are now looking for surveillance videos and contacting possible witnesses to determine how the package ended up in the parkade.