An inmate at Stony Mountain Institution in Manitoba has died from COVID-19, the Correctional Service of Canada announced Monday.

An inmate at Stony Mountain Institution in Manitoba has died from COVID-19, the Correctional Service of Canada announced Monday.

Officials have not released the name or age of the inmate, who died in hospital on Dec. 27. A coroner will conduct a review of the circumstances surrounding the death, the CSC said in a news release.

This marks the first COVID-19 death of an inmate linked to an outbreak at a Manitoba correctional facility, and the third federally sentenced inmate in Canada to die due to the virus since the start of the pandemic.

Earlier this month, the CSC announced the death of another inmate, Melvis Owen, on Dec. 15. The cause of Owen's death has not been released, but it is not currently listed as being related to COVID-19.

The service is reviewing the facts and surrounding circumstances of Owen's death, and a decision regarding the launch of National Board of Investigation will be made in the coming weeks, a spokesperson said.

There have been nine outbreaks in Manitoba correctional facilities, leading to 834 total infections — 144 staff and 690 "non-staff," according to data obtained by CBC News.

The first inmate at Stony Mountain Institution tested positive for COVID-19 on Nov. 10, and an outbreak was declared by Nov. 14. That outbreak has since grown to 316 total inmate infections and 33 staff infections as of Dec. 24.

Justin Kelsch, a correctional officer at the prison and head of the local branch of the Union of Canadian Correctional Officers, says the outbreak numbers are high, but notes that Stony Mountain Institution is also the largest federal correctional facility in the country.

According to Correctional Services Canada, there are currently 744 inmates in Stony Mountain Institution. There are about 285 correctional officers working at Stony Mountain prison, said Kelsch — though prison staff also includes health-care workers, kitchen staff and others.

"The second wave [of the pandemic] is proving to be more deadly or more of a problem than the first wave," said Catherine Latimer, executive director of the John Howard Society, a national charity that focuses on the causes and consequences of crime, and criminal justice reform.

"It must be terrifying for the prisoners who are [in Stony Mountain Institution] and for all of their families and loved ones. I think it's a real shame. I think steps could have been taken to mitigate the impact of that and they just were not taken."

Latimer cited several ways that federal prisons could have better prepared for, or acted in response to, the COVID-19 outbreaks happening in those institutions.

One possibility, which Latimer says is being done in Great Britain and other parts of Europe, is to use trailers as isolation spaces for inmates who test positive, so they aren't held in the same space as healthy inmates. Another option is to release inmates, who are at-risk medically but low-risk to society, on conditions to allow for less crowding in the prison.

"While being a full participant in the Canada-wide public health effort to fight COVID-19, CSC needs to ensure public safety and maintain operational readiness while protecting the health and safety of staff, contributing to containment efforts, and fulfilling our legal obligations with respect to care, custody, and supervision of offenders," a spokesperson told CBC News Monday night via email.

"CSC and [the Parole Board of Canada] continue to process eligible inmates for release in accordance with the law. A number of considerations go into release decision-making with public safety being the paramount consideration."

Since March 2020, the federal inmate population has dropped by 1,366 as of Dec. 13, the spokesperson said, adding that the decrease is the result of fewer people being sent to prison, plus continued releases into the community.

Latimer is most concerned about a potential failure in Stony Mountain Institution's infection control mechanisms, she said.

"I would think that since this is the second wave of the virus, we would have been much better prepared to have contingency plans in place and things that could be done that would actually reduce the likelihood that people would die and be contaminated in institutions," said Latimer.

The current outbreak may have been caused by Stony Mountain Institution relaxing on its operations, such as quarantining new inmates, she added.

CSC says it is monitoring the situation at the prison closely and that infection prevention measures, such as mandatory masks for inmates and staff and health screening for anyone entering the facility, are being applied.

The age and layout of the facility also don't help, says Kelsch. The medium-security services at Stony Mountain prison started over 140 years ago, and unlike newer facilities where a door with a tiny window separates inmates from the hallways, Stony Mountain only has jail bars.

"Is it surprising that the numbers climbed that high? I would have to say no, because once it enters, it spreads," said Kelsch. "Inmates share clothing, inmates share food, they move stuff around.

"We were good for a long time. Manitoba was in code red and we never had any confirmed cases inside. So once it came in, it basically just spread."

There is a level of stress and fear among the correctional officers that they could bring the illness home with them, Kelsch said, and now officers are working longer hours to make for staffing shortages caused by colleagues having to self-isolate..

The outbreak at Stony Mountain prison has extending impacts on Manitoba's health-care system, Latimer said, noting that the inmate who died was in an external hospital, and that other inmates may have to be hospitalized, which strains the health system.

WATCH | 'This is human beings in a closed environment': Stony Mountain inmate dies of COVID-19: 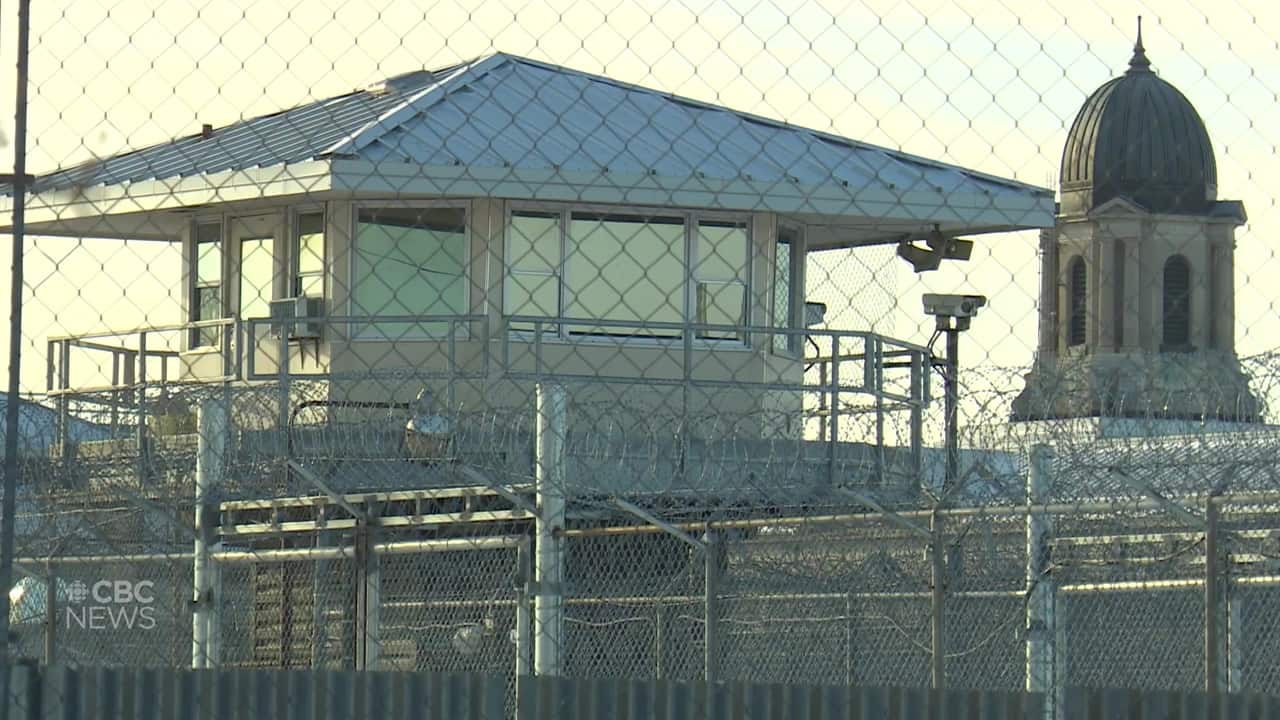 "They're sharing everything": Stony Mountain outbreak largest in Manitoba

27 days agoVideo
2:06
An inmate at Stony Mountain Institution in Manitoba has died from COVID-19. 2:06

With files from Marina Von Stackelberg