Newly elected Assiniboia MLA Steven Fletcher, is the first MLA in a wheelchair to sit in the province's legislature.

MLA Steven Fletcher, is the first quadriplegic MLA in the province's legislature 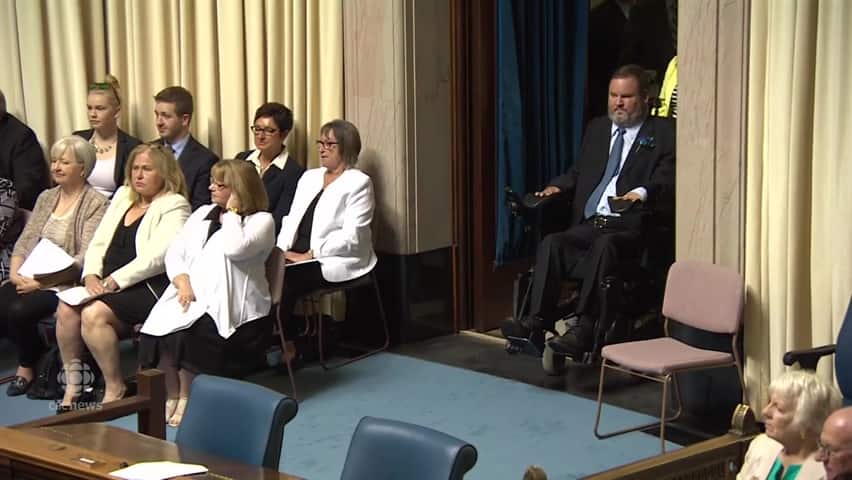 MLA Steven Fletcher, is the first MLA in a wheelchair to sit in the province's legislative assembly chamber

5 years agoVideo
1:04
Newly elected Assiniboia MLA Steven Fletcher, is the first MLA in a wheelchair to sit in the province's legislative assembly chamber. 1:04

The new government had its first session Monday and Fletcher was able to get straight onto the back bench seating area, where modifications had to be made to accommodate space for wheelchair access.

"This is an old building. A glorious building. It's beautiful. It's one of the nicest buildings in the country and it will be enhanced by making it accessible to everyone," said Fletcher.

A riser was built before Monday's session to allow for space for wheelchairs to access the back bench seating area. The Legislative Building, which started to be built in 1913 has other accessible features. Including a wheeler chair ramp to access the main entry on Broadway and elevators throughout the building, but the chamber had not been previously accessible.

Fletcher said while the current modifications are important, they are only a temporary solution. There is accessible space in the upper seating area of the chamber but because the chamber floor is sunken, wheelchairs still can't access the floor where the clerks and the front benches are.

Fletcher, who was the first quadriplegic member of parliament in the commonwealth when he was a federal MP, says it's hard to believe it's taken up until now to make institutions like the legislative building, truly accessible for all.

"Sometimes there needs to be a bit of a push to get things done, especially when it comes to shaping attitudes and breaking barriers and showing what can be done," said Fletcher.