The owner of a small urban farm near the outskirts of Winnipeg is facing animal welfare complaints, the latest in a years-long saga over the state of his property that has neighbours frustrated but afraid to take their concerns public.

The owner of a small urban farm near the outskirts of Winnipeg is facing animal welfare complaints, the latest in a years-long saga over the state of his property that has neighbours frustrated but afraid to take their concerns public.

Drago Kucas, the owner of the six-hectare pig and cattle farm on St. Mary's Road, who also uses the name Carl, says his animals — and the stray cats he feeds — are well cared for and live good lives, despite a recently launched animal welfare inspection.

"They should be more concerned about their own children, what they do, because those animals which are here, they have a better life than I do," said Kucas, who was seen on Monday confronting someone trying to feed cats at the edge of his property and who has a history of butting heads with the city. "I have a respect for them [the animals] very much."

A spokesperson with Manitoba's office of the provincial veterinarian says it has been looking into animal welfare complaints.

Area Coun. Brian Mayes (St. Vital) said he recently received a letter highlighting the concerns and he's aware of past complaints about the property. He said he is glad the provincial vet's office is on the case and confirmed city staff are now in talks with the province about next steps.

Not fit for animals: complaint

One such complaint alleges as many as 10 cats live on the property and are in need of medical attention, including one with a broken leg seen in June.

"The property is an environmental hazard, a disaster area, and certainly no place for animal or human to be residing," reads a letter of complaint dated June 30 sent to government officials. 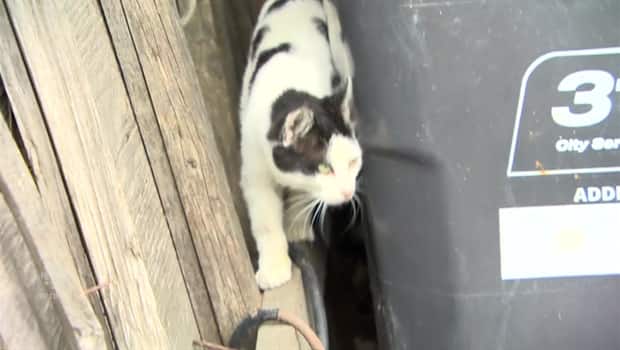 2 years ago
3:01
An animal protection officer and veterinarian found pigs, cattle and feral cats on Carl Drago Kucas's property are all in good health, but neighbours still say the St. Vital farm is an eyesore and has been a problem for years. 3:01

But according to an inspection report authored by veterinarian Ken Johnson, Kucas's animals appear to be doing fine.

Dr. Johnson said he was acting as an animal protection officer on behalf of the provincial vet's office on July 3 when he visited the farm and found the pigs and cattle were all in "good condition."

"The animals are in good shape, including the cats," he said. "None of them are starving."

Kucas, who says he was born in Croatia but has owned the St. Mary's Road farm for about 45 years, has drawn the ire of neighbours and landed before city council in the past.

The city would not confirm how many complaints have been made about the property over the years, but a spokesperson confirmed the lot is classified as rural-residential land.

The rural designation normally allows landowners to grow plants but not keep livestock, the spokesperson said.

But Kucas has retained rights to keep livestock on his property since he bought the land in the 1970s, a city spokesperson confirmed in November of 2018.

Kucas said he lives in a home on the property, despite giant holes in the roof.

Several neighbours told CBC News the fresh complaints are just the latest chapter in the issues with the state of his farm, which gives off a foul smell.

Kucas ran a failed 1989 campaign for councillor in the now-defunct Seine Valley ward, campaigning for greater transparency and accountability at city hall.

In 2010, the city ordered him to remove 20 derelict vehicles, a "dismantled tractor," a bathtub and a hot water tank, mattresses, scrap metal, tires, manure, old appliances and other "miscellaneous garbage" from his property. His appeal was denied.

Watch this tour of the property in 2010: 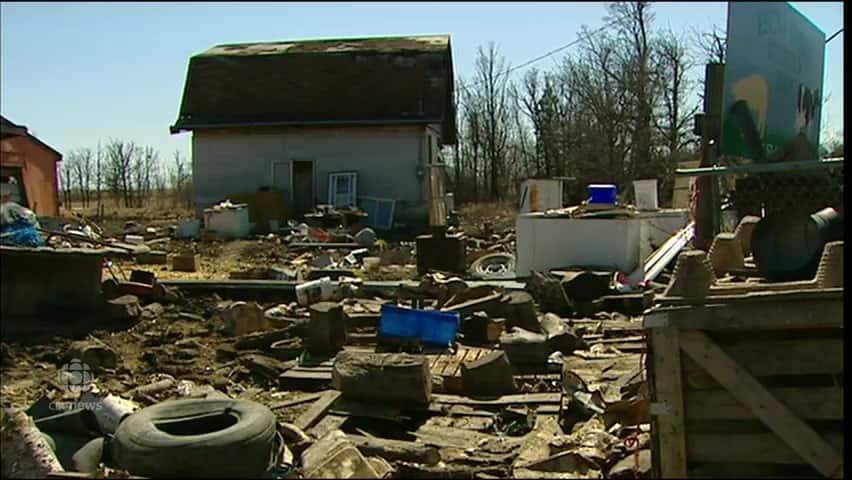 2 years ago
1:43
People who live near Drago Kucas — whose property in south St. Vital was littered with derelict automobiles, machinery and other debris at the time — told a city committee in 2010 they can't stand the foul odour and rodents. 1:43

The issue stemmed from an "ongoing neighbour dispute" that drew police officers to the property in 2009, said Winnipeg Const. Tammy Skrabek. In addition to police, at least five government agencies were involved in that case, including the provincial vet and the city's health, environmental, animal services and bylaw departments, she said.

Kucas said he has lived off very little income for years — about $10,000 annually — and kept the vehicles for parts.

Though many of those items are no longer visible from St. Mary's Road, cattle were seen gathered around a van in the field and a makeshift fence has been built using hay bales, garbage bins and plywood.

Some neighbours say cattle have wandered through holes in the fence and into their yards, while others called the farm an eyesore. Other than one neighbour who had no issues with Kucas, no neighbours agreed to speak on the record, citing safety concerns.

A woman named Laurie says battles over Kucas's animals have been ongoing for at least the two decades she has lived nearby.

She flagged environmental and animal welfare concerns in letters to the provincial vet, Mayes and other officials after finding a cat with a broken leg near Kucas's yard in June. 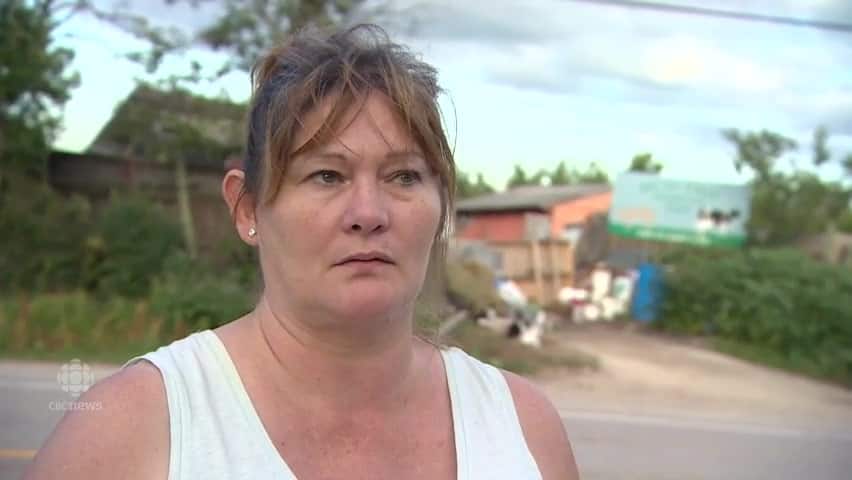 'We have a grave concern' over livestock and stray animals, local woman says of Winnipeg farm

2 years ago
0:50
Laurie says it's been a battle to get the owner of a farm on St. Mary's Road to clean up his yard. She filed a complaint about the welfare of animals, including stray cats, she says aren't well cared for. Meanwhile the farm owner, Carl Drago Kucas, says he loves his animals and they are well cared for. 0:50

"They are not cared for, they are not looked after, ever, in the 20 years that we've been here, and having them removed or looked after has always been a huge difficult situation, which I don't understand,"

"We have a grave concern about this property and the animals that are kept here," Laurie said, standing across from the St. Mary's Road property on Monday night.

She says some of the cats appear to be malnourished or in need of veterinary help, and she has since contacted at least eight local rescues for help.

But of the 10 or so cats Dr. Johnson says he saw on July 3, none appeared injured and all seemed healthy. That wasn't the first time he's been called to Kucas's land.

"It's not the prettiest looking pristine piece of property, but at the same time I've never seen any animals injured," he said.

Laurie said she recently took one of the cats to a vet and phoned in a report to the city. She's been returning and placing dishes of cat food and water off-property only to return and find them destroyed.

Kucas shouted down another woman Monday afternoon who showed up during an interview with CBC News and left a short time later. Before she left, she said she heard through a Facebook group there were stray cats in the area and she was there to feed them.

Watch Kucas confront a woman who came to feed the stray cats: 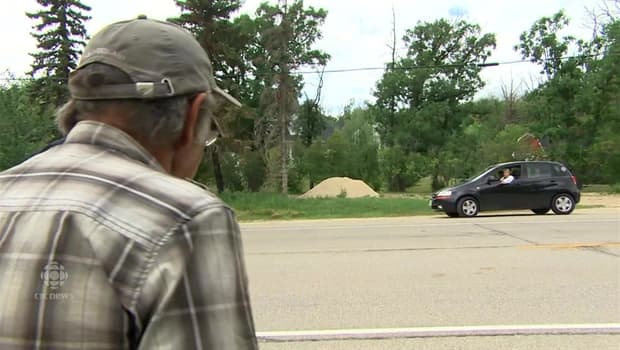 2 years ago
0:53
Carl Drago Kucas confronts a woman who shows up to his St. Mary's Road property to feed stray cats that live on his property. Kucas says though the cats aren't technically his, he does feed them and they keep rats and pests from his pigs and cattle. 0:53

Laurie said she was "chased down by the farm owner" Monday night when she went back to feed the cats.

"He tried to cut us off from proceeding down the road," said Laurie. CBC News has agreed not to publish her last name due to safety concerns.

She wants the province or city to remove all animals from Kucas's property.

Kucas says his pigs and cows are doing just fine. He said he feeds the feral cats and kittens, but because he doesn't provide them shelter, they aren't his and he isn't obligated to get them shots or licensed.

The city made it mandatory for cat owners to register their felines in 2013.

Kucas says he uses the cats to keep mice and rats at bay because using conventional pest control measures could poison his livestock.

He mounted a motion-detection camera on a shed outside after a few of the cats went missing in the night recently.

"Somebody stole them," he said. "They try to come at midnight right inside the yard, and I get upset about it, because would you like to have somebody go inside, jump over your fence and roam around your yard?"

Kucas said he has been trying to obtain a permit to build a new home on his lot but the city has yet to issue a permit. He said he intends on building this summer whether or not the permits come through.

A city spokesperson said residential demolition and building permits are not issued if an owner has outstanding property taxes.

Kucas has been warned to pay three years in outstanding property taxes, the spokesperon said, and a final notice will be issued in August.

"Should the taxes remain unpaid, the property will be included in this year's tax sale," the spokesperson said in an email.