The drive home should be smoother Thursday afternoon as the city reopens two southbound lanes on St Mary's Road after a sinkhole — now filled in by city crews — formed in the middle of the road yesterday. 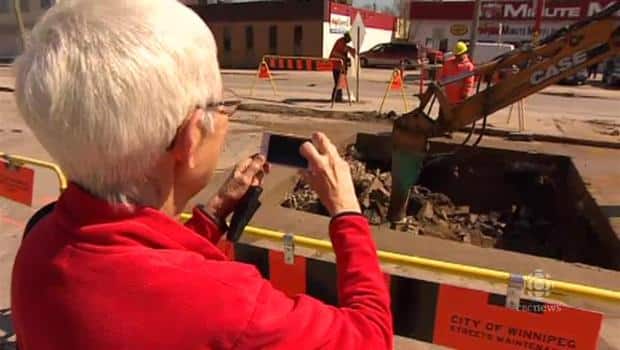 7 years agoVideo
2:06
The drive home should be smoother Thursday afternoon as the city reopens two southbound lanes on St Mary's Road after a sinkhole formed in the middle of the road yesterday. 2:06

The drive home should be smoother Thursday afternoon as the city reopens two southbound lanes on St Mary's Road after a sinkhole formed in the middle of the road yesterday.

City engineer Susan Lambert said harsh winter conditions may be to blame for the car-sized sinkhole.

She doesn't know how long the pipe was broken but said it is buried shallower than a regular sewer line and was more vulnerable to the cold.

Lambert said a feeder pipe that takes water from the road and delivers it into the sewer system broke, which washed out the earth beneath the pavement.

A large chunk of pavement on southbound St. Mary's caved in at Morier Avenue, near Loona Rosa Restaurant and Woodcock Cycle shortly after 3 p.m. Wednesday.

Southbound St. Mary's Road was closed between Guay Avenue and Morier Avenue Wednesday and is still being rerouted to Guay Avenue, Des Meurons Street and Vivian Avenue, according to city officials.
1 of 0

"It's about the size of a Smart car and it's taking up right in the middle of both lanes of traffic, so all of southbound traffic is being rerouted as you can't drive past it," Jonathon Millions of Woodcock Cycle noted Wednesday.

Millions said one of his customers had observed earlier in the day that the section of road was sinking, and city crews were notified.

"I’ve seen pictures of sinkholes right across North America, okay? It happens all the time,” Katz said. ”It's something you don't want to see … I think we can all drive on our roads and don't have to worry about sinkholes."

Councillor Paula Havixbeck, who announced her run for mayor Wednesday, started her bid to be Winnipeg's next mayor by taking a kick at the Katz administration.

She called the state of the city's infrastructure “third world” and “embarrassing,” and requested the city publish lists of areas with old and broken pipes.

"Brown water, broken pipes, frozen pipes: we have some real problems here — third world,” she said. “We need to come up with a plan, we need to see an aged-analysis of where the pipes are broken, for starters."

St. Boniface resident Louisa Ryz said the city needs to do more to maintain its infrastructure.

She took a picture of the gaping hole to send to family in Italy.

"In Italy they have situations like this because they build their homes on mountain sides and stuff and they don't have maybe this so much, but they have mudslides that are devastating," said Ryz.

More details of what created the sinkhole will be confirmed by city officials once crews have fully excavated the area.

Katz said earlier Thursday the city would do what it could to fix failing infrastructure and that the sinkhole should be fully by repaired next week.

Perhaps not surprisingly, at least two Winnipeg sinkhole Twitter accounts cropped up on Wednesday (below).